Something Fundamentally Different: The Universe Is Expanding Faster Than Ever Thought

The new measurements, published April 25 in Astrophysical Journal, reduce the chances that the disparity is an accident from 1 in 3,000 to only 1 in 100,000 and suggest that new physics may be needed to better understand the cosmos.

This is a ground-based telescope’s view of the Large Magellanic Cloud, a satellite galaxy of our Milky Way. The inset image, taken by the Hubble Space Telescope, reveals one of many star clusters scattered throughout the dwarf galaxy. 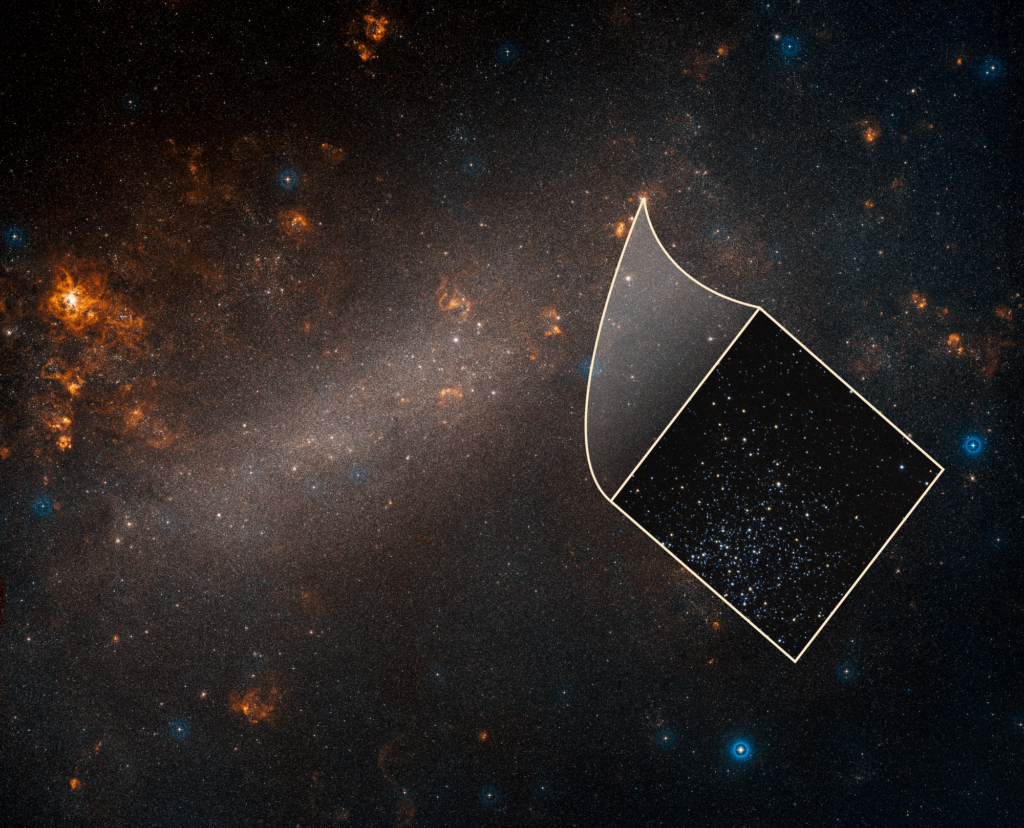 “This mismatch has been growing and has now reached a point that is really impossible to dismiss as a fluke. This is not what we expected,” says Adam Riess, Bloomberg Distinguished Professor of Physics and Astronomy at The Johns Hopkins University, Nobel Laureate and the project’s leader.

In this study, Riess and his SH0ES (Supernovae, H0, for the Equation of State) Team analyzed light from 70 stars in our neighboring galaxy, the Large Magellanic Cloud, with a new method that allowed for capturing quick images of these stars. The stars, called Cepheid variables, brighten and dim at predictable rates that are used to measure nearby intergalactic distances.

The usual method for measuring the stars is incredibly time-consuming; the Hubble can only observe one star for every 90-minute orbit around Earth. Using their new method called DASH (Drift And Shift), the researchers using Hubble as a “point-and-shoot” camera to look at groups of Cepheids, thereby allowing the team to observe a dozen Cepheids in the same amount of time it would normally take to observe just one.

With this new data, Riess and the team were able to strengthen the foundation of the cosmic distance ladder, which is used to determine distances within the Universe, and calculate the Hubble constant, a value of how fast the cosmos expands over time.

This illustration shows the three basic steps astronomers use to calculate how fast the universe expands over time, a value called the Hubble constant. All the steps involve building a strong “cosmic distance ladder,” by starting with measuring accurate distances to nearby galaxies and then moving to galaxies farther and farther away. This “ladder” is a series of measurements of different kinds of astronomical objects with an intrinsic brightness that researchers can use to calculate distances. 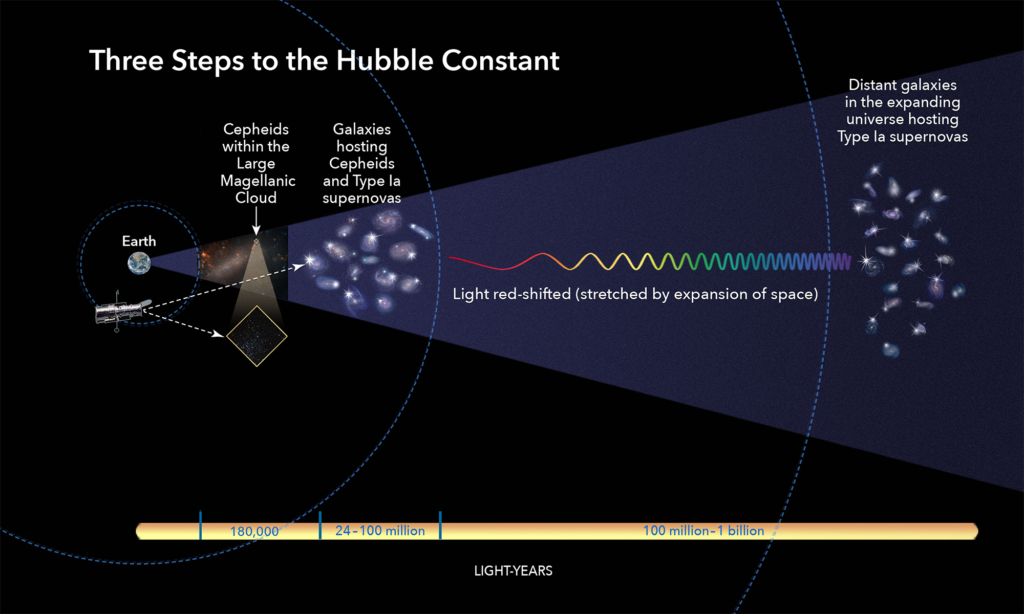 The team combined their Hubble measurements with another set of observations, made by the Araucaria Project, a collaboration between astronomers from institutions in Chile, the U.S., and Europe. This group made distance measurements to the Large Magellanic Cloud by observing the dimming of light as one star passes in front of its partner in eclipsing binary-star systems.

The combined measurements helped the SH0ES team refine the Cepheids’ true brightness. With this more accurate result, the team could then “tighten the bolts” of the rest of the distance ladder that uses exploding stars called supernovae to extend deeper into space.

As the team’s measurements have become more precise, their calculation of the Hubble constant has remained at odds with the expected value derived from observations of the early universe’s expansion by the European Space Agency’s Planck satellite based on conditions Planck observed 380,000 years after the Big Bang.

“This is not just two experiments disagreeing,” Riess explained. “We are measuring something fundamentally different. One is a measurement of how fast the universe is expanding today, as we see it. The other is a prediction based on the physics of the early universe and on measurements of how fast it ought to be expanding. If these values don’t agree, there becomes a very strong likelihood that we’re missing something in the cosmological model that connects the two eras.”

While Riess doesn’t have an answer as to exactly why the discrepancy exists, he and the SH0ES team will continue to fine-tune the Hubble constant, with the goal of reducing the uncertainty to 1%. These most recent measurements brought the uncertainty in the rate of expansion down from 10% in 2001 to 5% in 2009 and now to 1.9% in the present study.

Funding for this research was provided by the National Aeronautics and Space Administration through programs GO-14648, 15146 from the Space Telescope Science Institute, which is operated by AURA, Inc., under NASA contract NAS 5-26555.