Insect World Zombies and Their Creators

In Brazil a wasp has a way to turn a spider in a zombie that will spin a protective web for it's killers children.

Parasitoid wasps lay their eggs on a spider’s back. This team proposes that by injecting the spider host with the molting hormone, ecdysone, the wasp induces the spider to make a special web for the wasp’s pupa.

Setting off a startling chain of events, a parasitoid wasp can force a spider to weave a special web to suspend the wasp pupa just before it finishes killing its spider host. William Eberhard, staff scientist emeritus at the Smithsonian Tropical Research Institute and Marcelo Gonzaga at the Universidade Federal de Uberlândia in Brazil have assembled wide-ranging evidence that the ‘zombification’ mechanism involves hacking existing web-spinning mechanisms by hijacking the spider’s own molting hormone, ecdysone.

In a new paper published in the Biological Journal of the Linnean Society they combined a review of all known reports of different wasp species known to zombify different spider species around the world; the results from a molecular study in Brazil; and new observations of Costa Rican spiders to demonstrate several previously unappreciated patterns that suggest that the wasp larvae use ecdysone.

One puzzle the researchers address is how a single wasp species can induce an impressive diversity of changes in the webs of many different spider host species. In the most complex cases, the spider’s web construction is affected at several different stages: from selecting a site to modifying several different key design elements that usually result in a sheltered, stable home for its pupal cocoon.

A wasp getting ready to attack a spider. 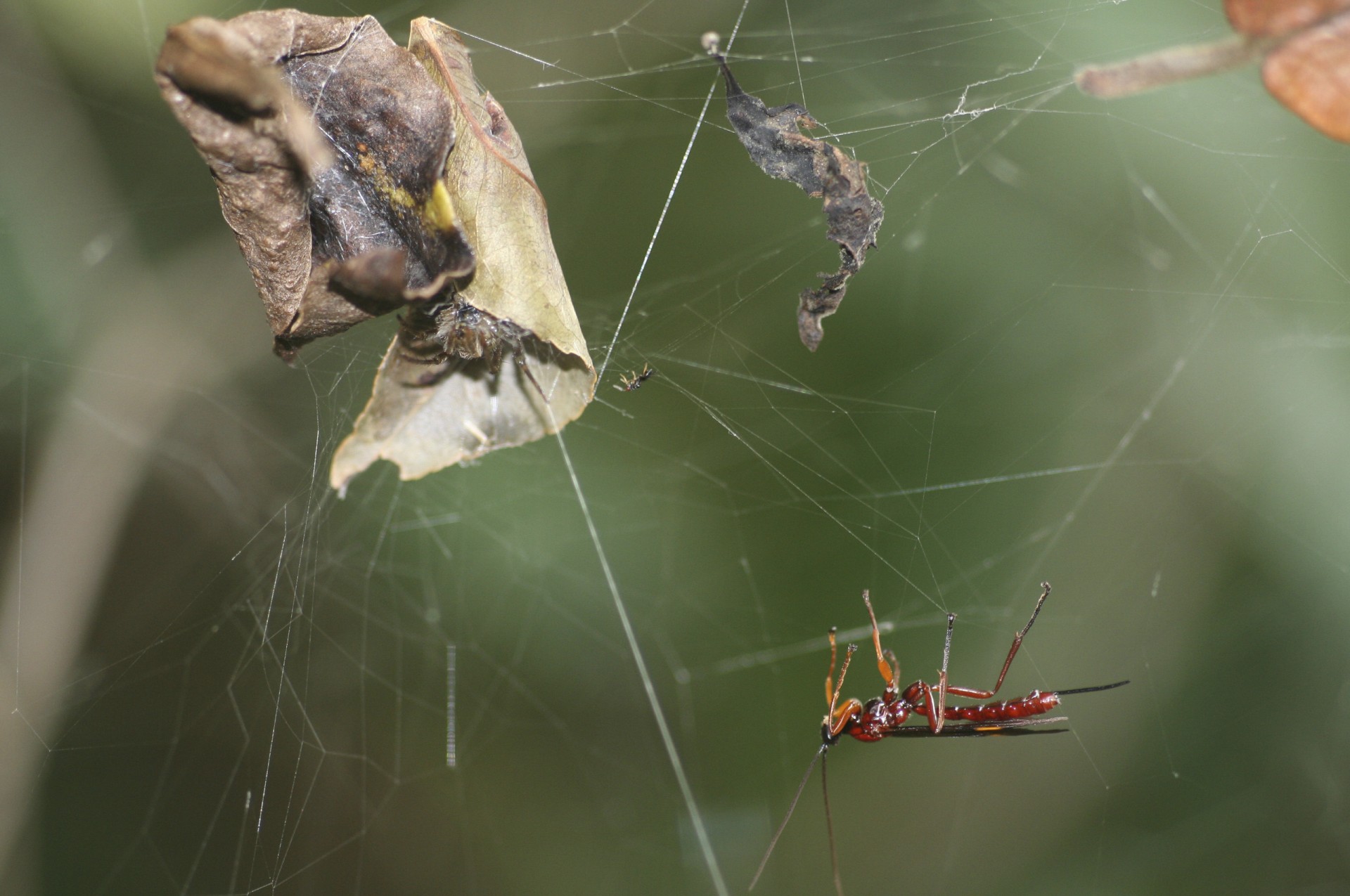 A wasp getting ready to attack a spider. 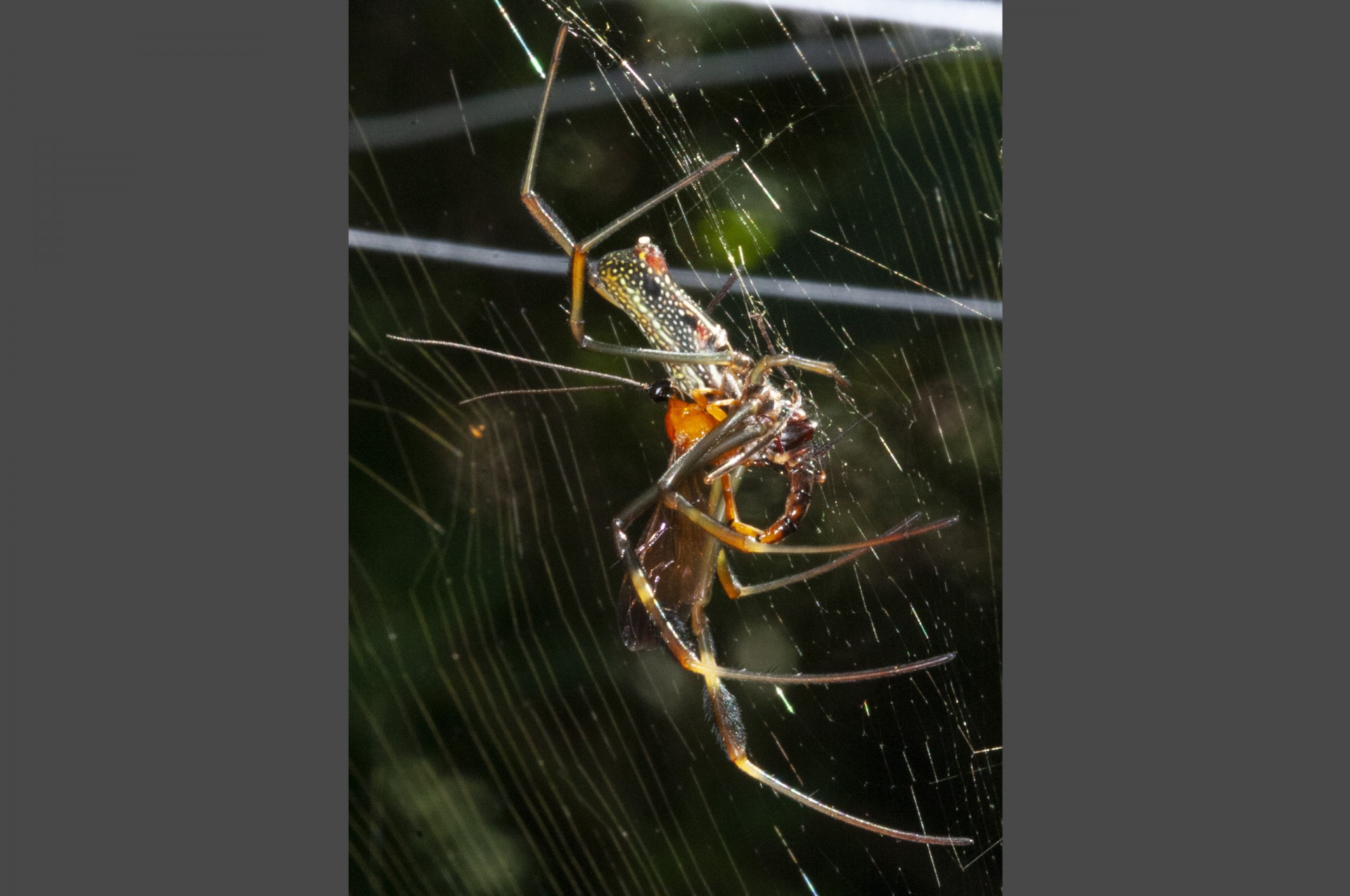 A wasp lays an egg on the spotted abdomen of its spider host. 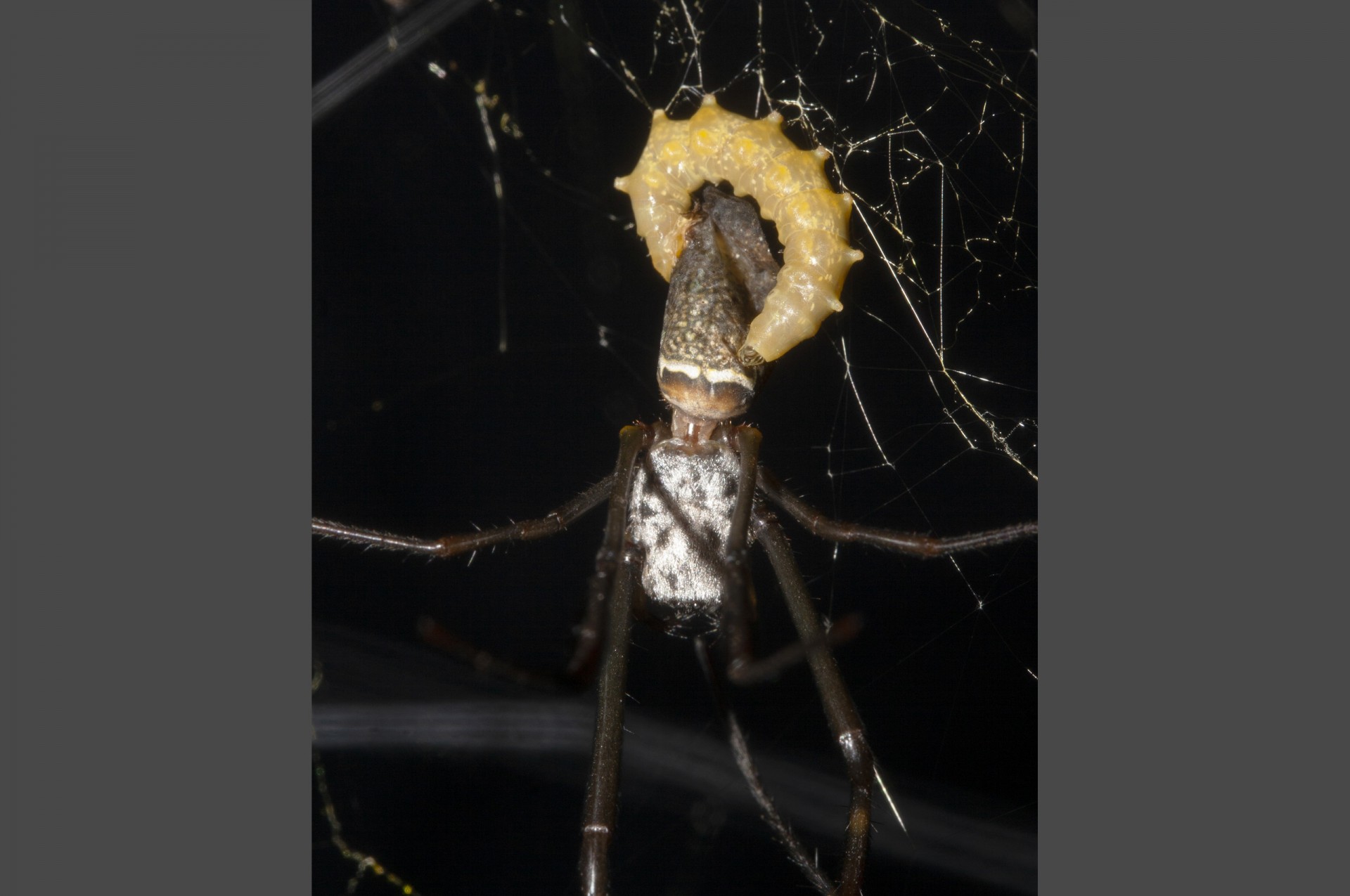 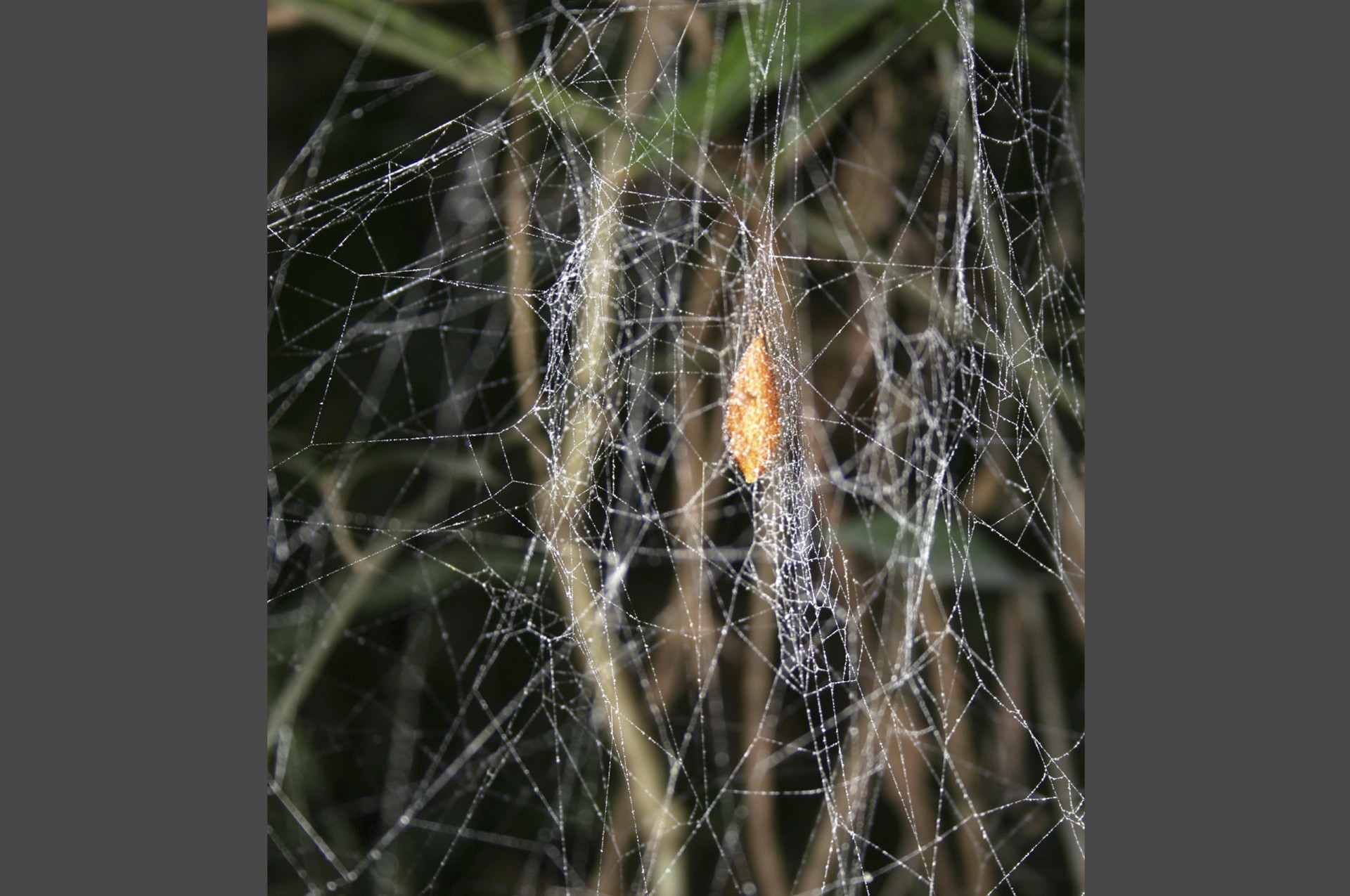 After eating the spider, this wasp is now in its pupal stage and hangs from the spider’s molting web. 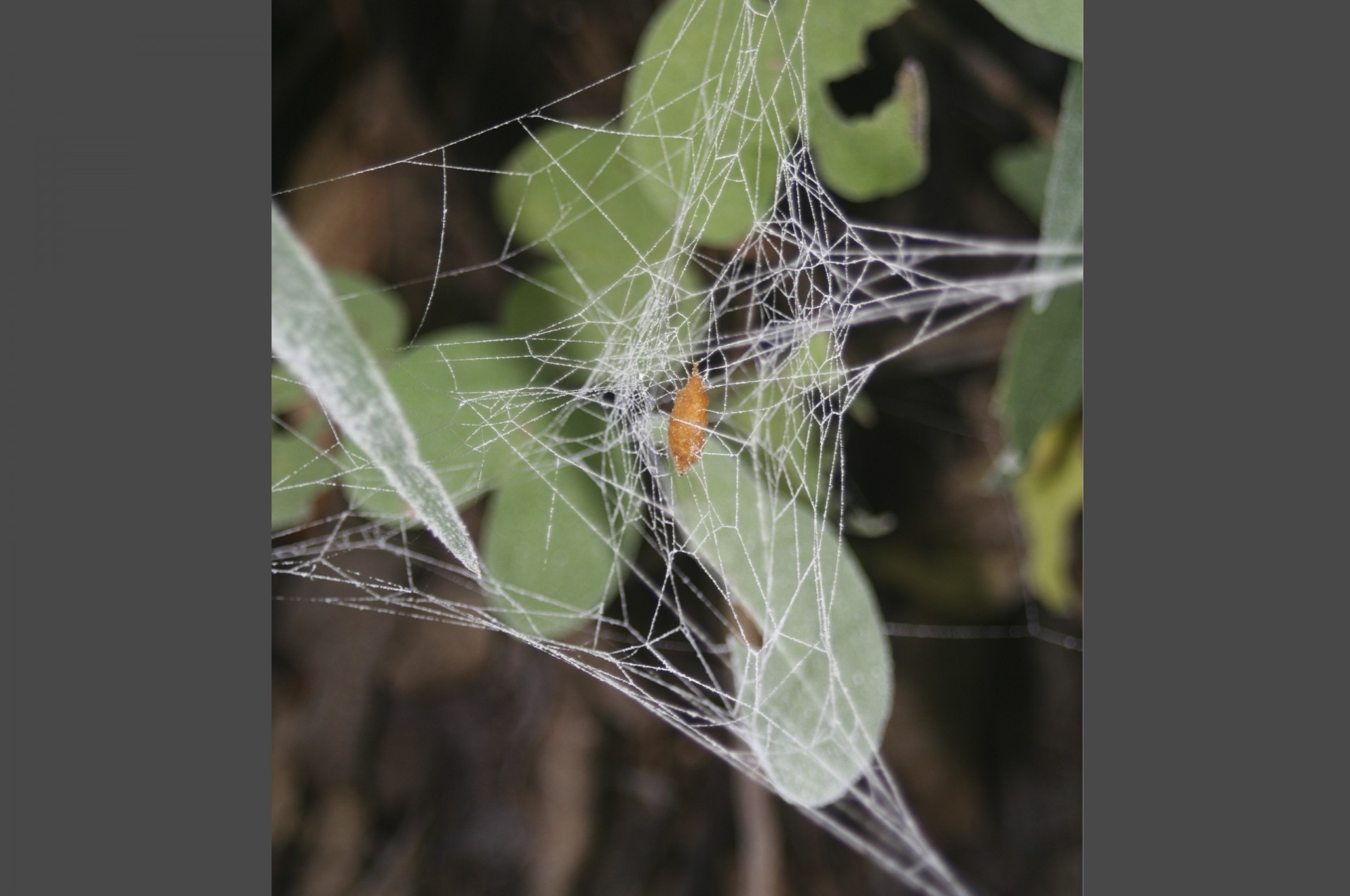 
“Several studies suggested that sometimes the webs induced by the wasps resemble the webs that unparasitized spiders build just prior to molting,” said Gonzaga. “We combined that observation with a previous discovery that, in one genus, spiders that had just built cocoon webs had unusually high concentrations of ecdysone in their bodies, and predicted that the specificity of the wasp larva’s effects may already be present in the spider’s nervous system, in the form of its specific behavioral responses to the hormone that controls its own molting cycle. By hacking into this system, the wasps ensure the safety of their own offspring at the expense of their host.”

“Now that we have a proposed mechanism, we can ask a new set of questions,” Eberhard says. “Because the lines in spider webs represent precise records of their behavior, we could study “zombification” in unprecedented detail by looking at the lines in cocoon and molting webs. We discovered that both web types vary, and more importantly, that the variations only overlap partially.

“The larvae probably tweak the spider’s molting web construction behavior to gain added protection. The mechanisms by which these additional modifications are obtained may result from differences in the timing or amounts of ecdysone, or modifications in the ecdysone molecules themselves, but they remain to be documented,” Eberhard continued.