How To Defend Earth from Asteroid Strikes

A mere 17-20 meters across, the Chelyabinsk meteor caused extensive ground damage and numerous injuries when it exploded on impact with Earth's atmosphere in February 2013.

To prevent another such impact, Amy Mainzer and colleagues use a simple yet ingenious way to spot these tiny near-Earth objects (NEOs) as they hurtle toward the planet. She is the principal investigator of NASA's asteroid hunting mission at the Jet Propulsion Laboratory in Pasadena, California, and will outline the work of NASA's Planetary Defense Coordination Office this week at the American Physical Society April Meeting in Denver -- including her team's NEO recognition method and how it will aid the efforts to prevent future Earth impacts.

This is a collection of images from the WISE spacecraft of the asteroid 2305 King, which is named after Martin Luther King Jr. The asteroid appears as a string of orange dots because this is a set of exposures that have been added together to show its motion across the sky. These infrared pictures have been color-coded so that we can perceive them with the human eye: 3.4 microns is represented as blue; 4.6 microns is green, 12 microns is yellow, and 22 microns is shown as red. From the WISE data, we can compute that the asteroid is about 12.7 kilometers in diameter, with a 22% reflectivity, indicating a likely stony composition. 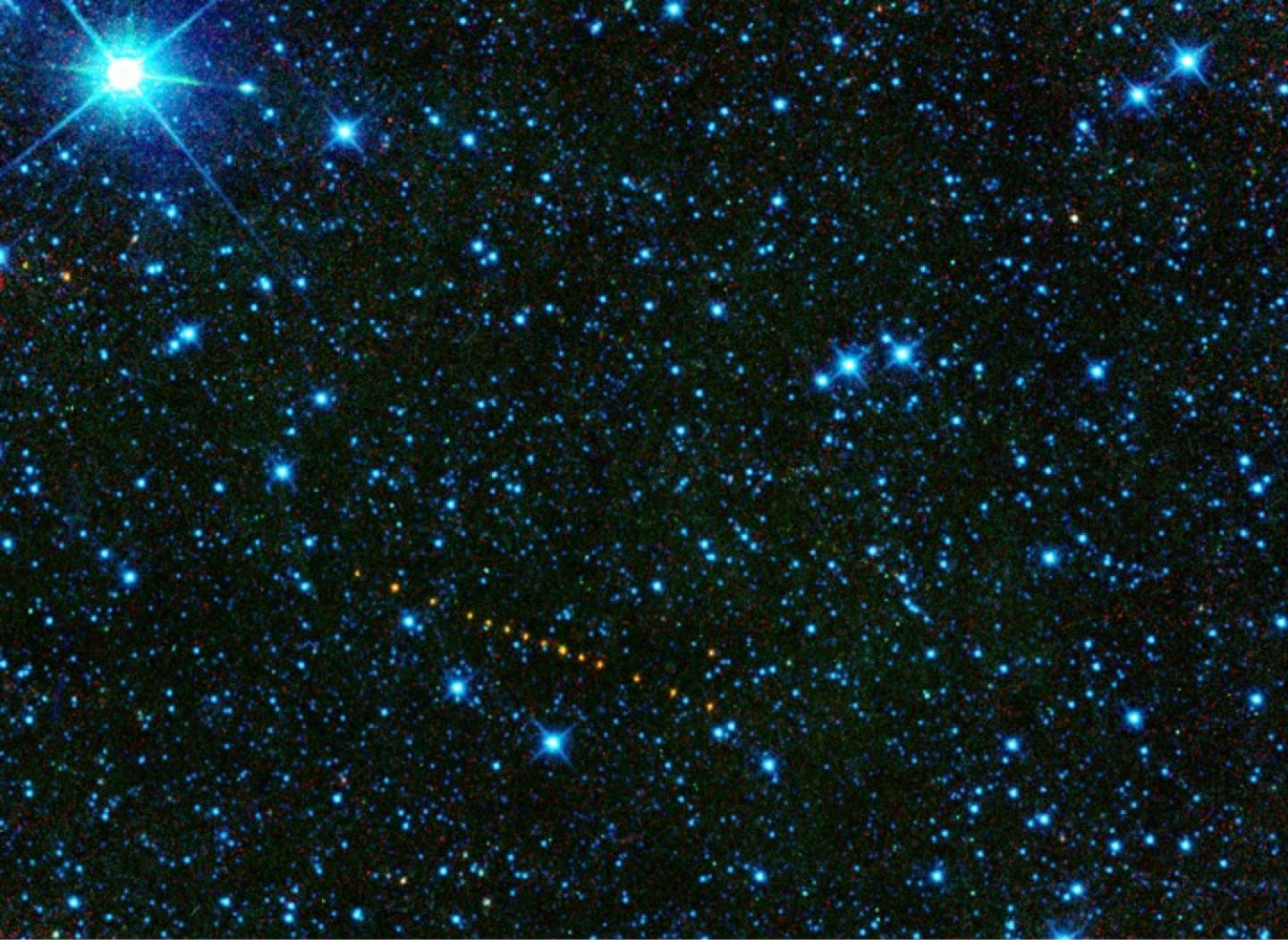 "If we find an object only a few days from impact, it greatly limits our choices, so in our search efforts we've focused on finding NEOs when they are further away from Earth, providing the maximum amount of time and opening up a wider range of mitigation possibilities," Mainzer said.

But it's a difficult task -- like spotting a lump of coal in the night's sky, Mainzer explained. "NEOs are intrinsically faint because they are mostly really small and far away from us in space," she said. "Add to this the fact that some of them are as dark as printer toner, and trying to spot them against the black of space is very hard."

Instead of using visible light to spot incoming objects, Mainzer's team at JPL/Caltech has leveraged a characteristic signature of NEOs -- their heat. Asteroids and comets are warmed by the sun and so glow brightly at thermal wavelengths (infrared), making them easier to spot with the Near-Earth Object Wide-field Infrared Survey Explorer (NEOWISE) telescope.

This is an image of the proposed Near-Earth Object Camera (NEOCam) mission, which is designed to find, track and characterize Earth-approaching asteroids and comets. Using a thermal infrared camera, the mission would measure the heat signatures of NEOs regardless of whether they are light or dark colored. The telescope's housing is painted black to efficiently radiate its own heat into space, and its sun shield allows it to observe close to the Sun where NEOs in the most Earth-like orbits spend much of their time. In the background is a set of images of main belt asteroids collected by the prototype mission NEOWISE; the asteroids appear as red dots against the background stars and galaxies. 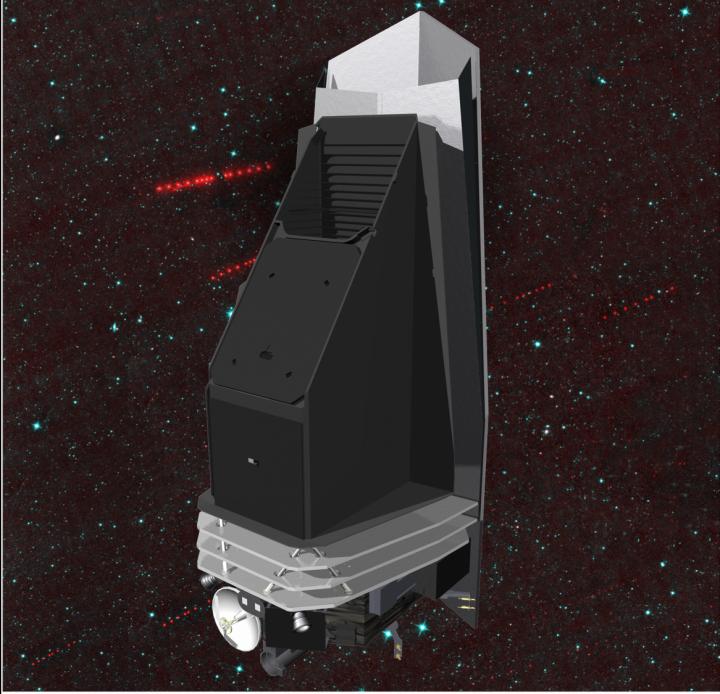 "With the NEOWISE mission we can spot objects regardless of their surface color, and use it to measure their sizes and other surface properties," Mainzer said.

Discovering NEO surface properties provides Mainzer and her colleagues an insight into how big the objects are and what they are made of, both critical details in mounting a defensive strategy against an Earth-threatening NEO.

For instance, one defensive strategy is to physically "nudge" an NEO away from an Earth impact trajectory. But to calculate the energy required for that nudge, details of NEO mass, and therefore size and composition, are necessary.

Astronomers also think that examining the composition of asteroids will help to understand how the solar system was formed.

"These objects are intrinsically interesting because some are thought to be as old as the original material that made up the solar system," Mainzer said. "One of the things that we have been finding is that NEOs are pretty diverse in composition."

Mainzer is now keen to leverage advances in camera technology to aid in the search for NEOs. "We are proposing to NASA a new telescope, the Near-Earth Object Camera (NEOCam), to do a much more comprehensive job of mapping asteroid locations and measuring their sizes," Mainzer said.

NASA is not the only space agency trying to understand NEOs. For instance, the Japan Aerospace Exploration Agency's (JAXA's) Hayabusa 2's mission plans to collect samples from an asteroid. And in her presentation Mainzer will explain how NASA works with the global space community in an international effort to defend the planet from NEO impact.
The NEOWISE space telescope spotted Comet C/2013 US10 Catalina speeding by Earth on August 28, 2015. This comet swung in from the Oort Cloud, the shell of cold, frozen material that surrounds the Sun in the most distant part of the solar system far beyond the orbit of Neptune. NEOWISE captured the comet as it fizzed with activity caused by the Sun's heat. On November 15, 2015, the comet made its closest approach to the Sun, dipping inside the Earth's orbit; it is possible that this is the first time this ancient comet has ever been this close to the Sun. NEOWISE observed the comet in two heat-sensitive infrared wavelengths, 3.4 and 4.6 microns, which are color-coded as cyan and red in this image. NEOWISE detected this comet a number of times in 2014 and 2015; five of the exposures are shown here in a combined image depicting the comet's motion across the sky. The copious quantities of gas and dust spewed by the comet appear red in this image because they are very cold, much colder than the background stars. 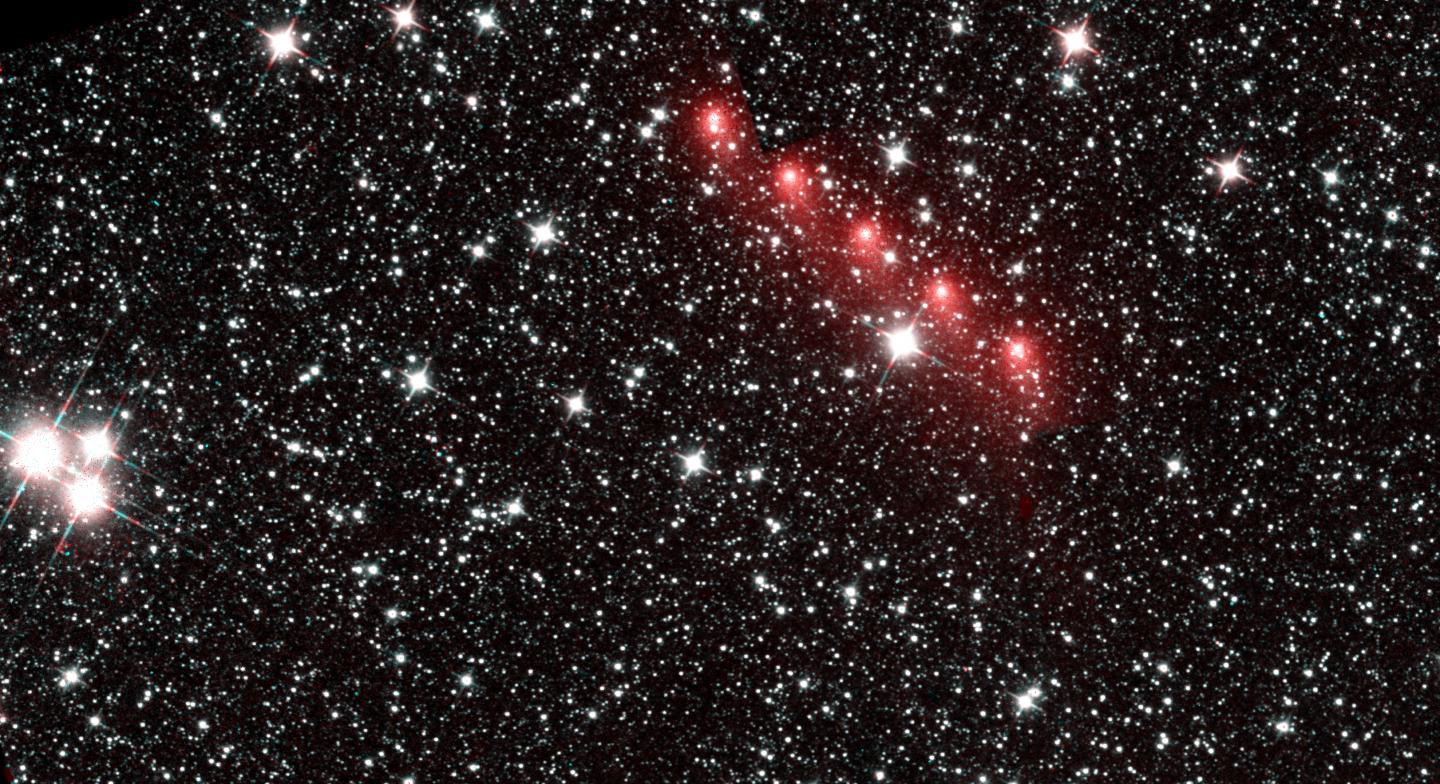