From Vulcan's Home: Biggest Eruption in Europe in the Last 200,000 Years

A mysterious large-magnitude eruption from the home of Vulcan, the Roman god of fire, covered the Mediterranean in ash 29,000 years ago. The event occurred at Campi Flegrei Caldera

The area of the caldera consists of 24 craters and volcanic edifices; most of them lie under water. Hydrothermal activity can be observed at Lucrino, Agnano and the town of Pozzuoli. There are also effusive gaseous manifestations in the Solfatara crater, the mythological home of the Roman god of fire, Vulcan.  A place also called the Phlegraean Fields, A new Geology article by Paul Albert and colleagues discusses a 29,000-year-old eruption, here verified as coming from Campi Flegrei, that spread a volcanic ash layer more than 150,000 square kilometers of the Mediterranean.

Knowledge of large explosive eruptions is mostly established from geological investigations of the exposed deposits found around the source volcano, with the deposits of large eruptions forming thick sequences. However, since the late 1970s, a widespread volcanic ash layer, dated at about 29,000 years ago, was commonly identified in marine and lake sediment cores from across the Mediterranean, documenting the occurrence of a large-magnitude eruption. Despite this widespread distribution and relatively young age, no clear evidence of such an event was identified at any of the main active volcanoes in the region.

In this study, the team’s detailed chemical analysis (volcanic glass) of an eruption deposit found five kilometers northeast of Campi Flegrei caldera in Naples, Italy, are entirely consistent with the distinctive composition of this ash layer. This, combined with new dating of the near-source eruption deposit, verifies that Campi Flegrei was responsible for this widespread ash layer. 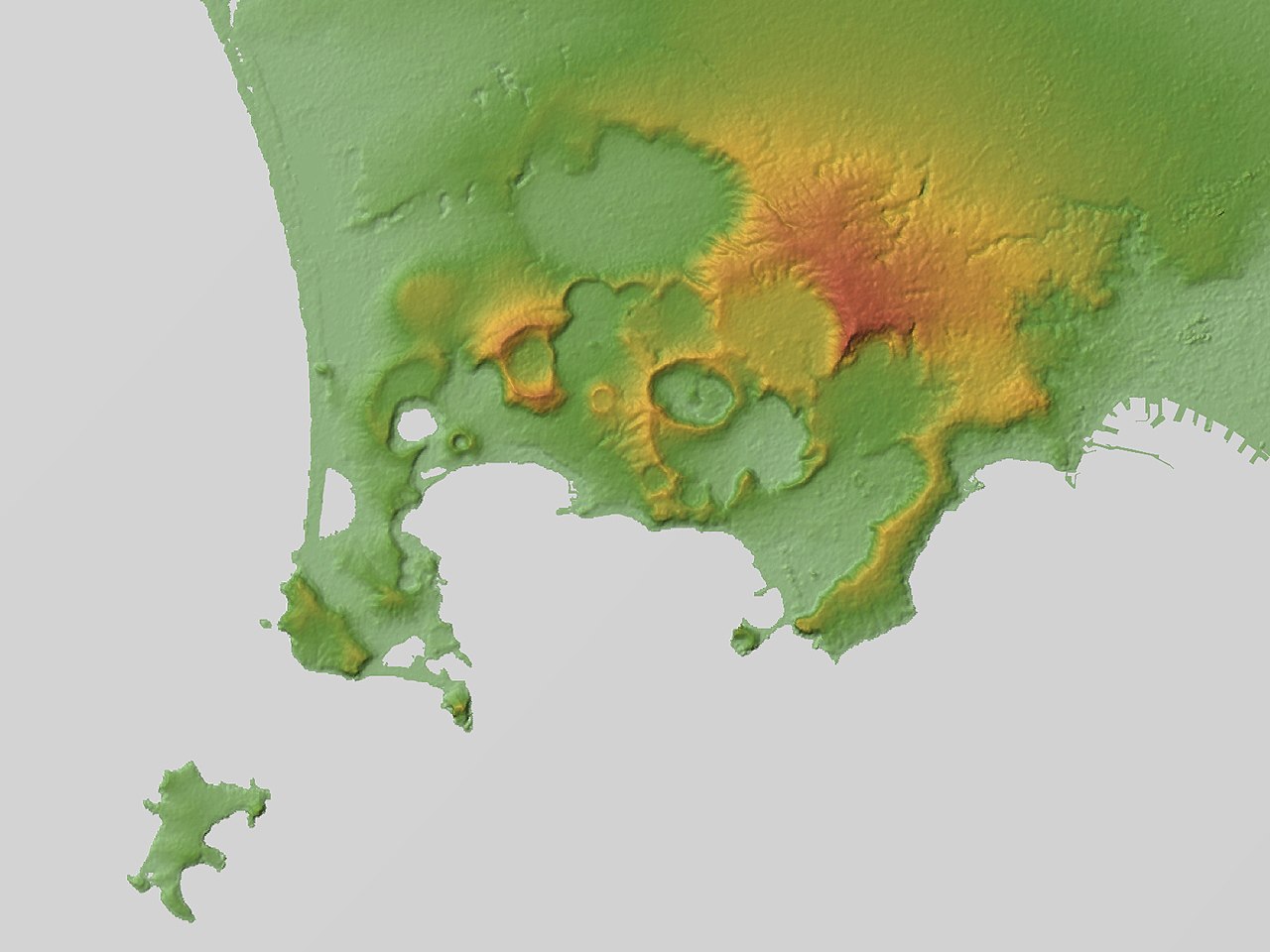 Constraints on the size of the eruption were determined by the team using a computational ash dispersal model which integrated the thicknesses of the near-source eruption deposits, named here the Masseria del Monte Tuff, with those of the related ash fall across the Mediterranean.

View of the eastern part of the populated Campi Flegrei caldera from the Camadoli Hill. The volcano is the source of the Masseria del Monte Tuff eruption 29,000 years ago. More than 300,000 people live within this active caldera that has experienced more than 60 eruptions in the last 15,000 years. One of these recent eruptions formed the small Nisida cone that is seen lying just off the mainland. The Bay of Naples and Capri can be seen in the background. The results indicate that this eruption at Campi Flegrei caldera was similar in scale to the younger of two known large-magnitude, caldera-forming eruptions at the volcano, the Neapolitan Yellow Tuff (about 15,000 years ago). The Masseria del Monte Tuff eruption was smaller than the older caldera-forming eruption, the enormous Campanian Ignimbrite (about 40,000 years old), which dispersed ash as far as Russia (more than 2,500 km from the volcano).

In contrast to other large magnitude events at Campi Flegrei, the lack of thick, traceable, deposits for this eruption appear to be the result of the eruption dynamics and their destruction and burial by more recent activities. This research highlights the benefits of investigating explosive eruption records preserved as ash fall in sedimentary records when attempting to accurately reconstruct the tempo and magnitude of past activity at highly productive volcanoes such as Campi Flegrei.

The place of Vulcan is a plain where many sulfurous vapor outlets are located (currently Solfatara). 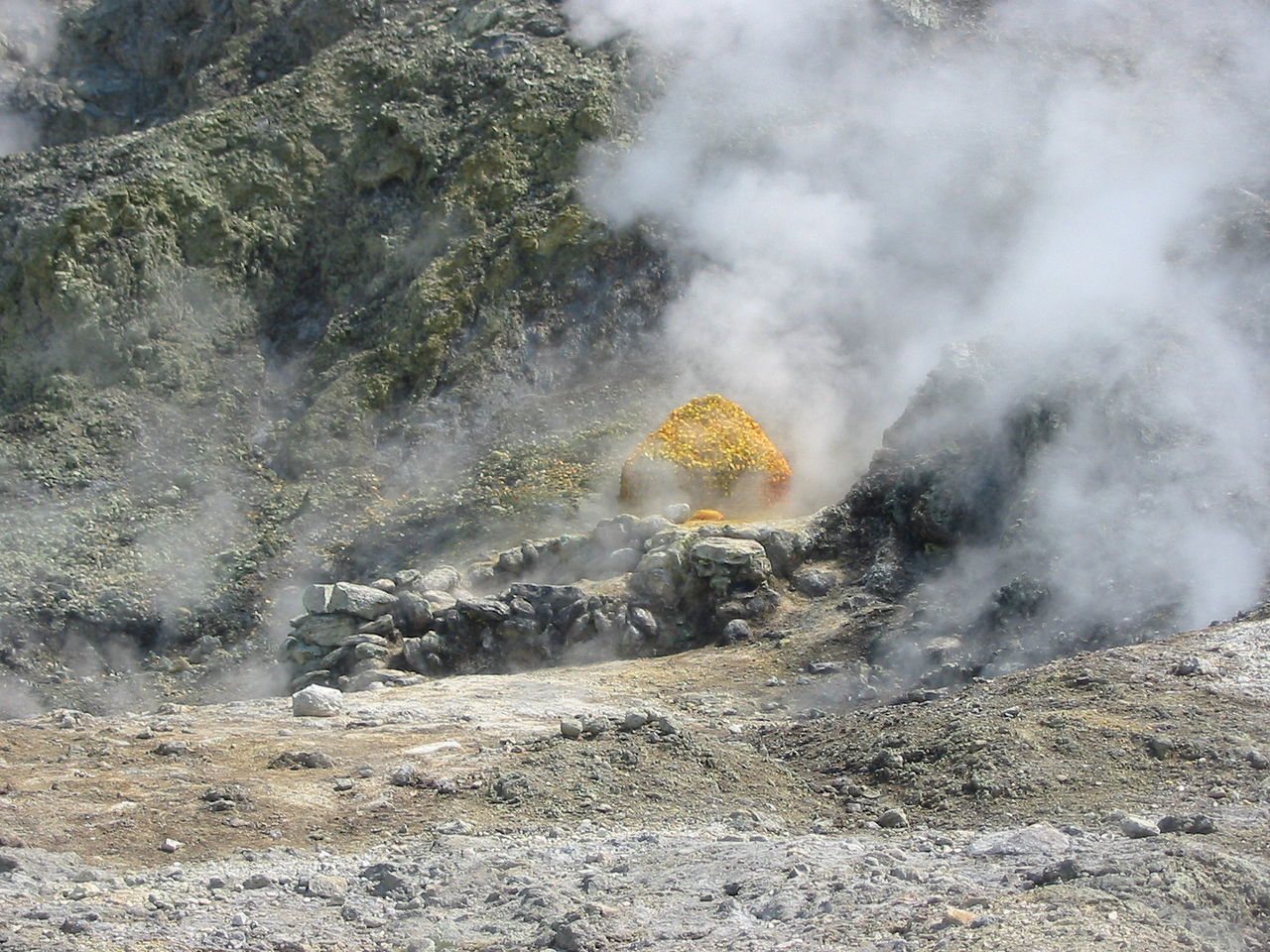