The first type of molecule that ever formed in the universe has been detected in space for the first time, after decades of searching. Scientists discovered its signature in our own galaxy using the world’s largest airborne observatory, NASA’s Stratospheric Observatory for Infrared Astronomy, or SOFIA, as the aircraft flew high above the Earth’s surface and pointed its sensitive instruments out into the cosmos. 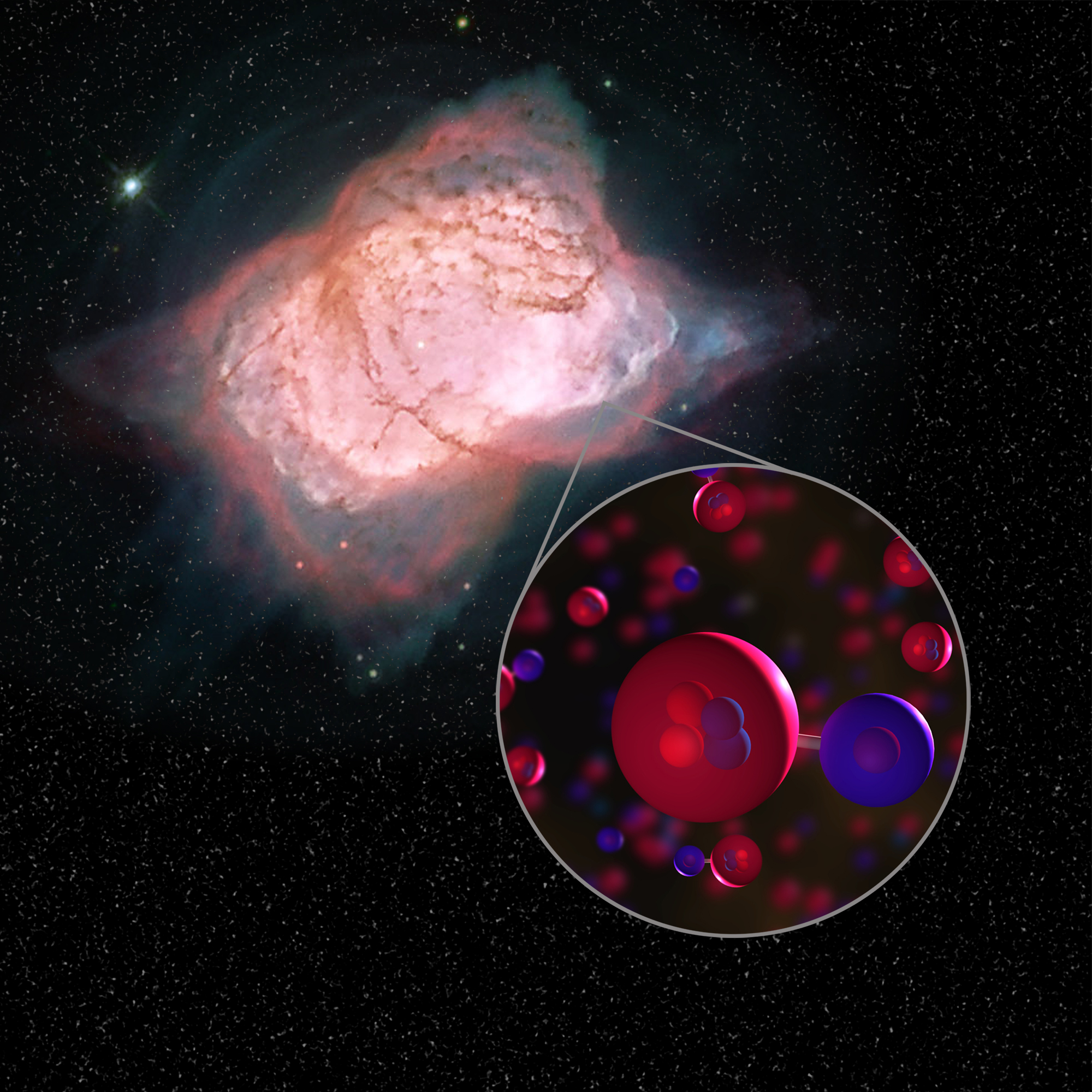 When the universe was still very young, only a few kinds of atoms existed. Scientists believe that around 100,000 years after the big bang, helium and hydrogen combined to make a molecule called helium hydride for the first time. Helium hydride should be present in some parts of the modern universe, but it has never been detected in space — until now.

SOFIA found modern helium hydride in a planetary nebula, a remnant of what was once a Sun-like star. Located 3,000 light-years away near the constellation Cygnus, this planetary nebula, called NGC 7027, has conditions that allow this mystery molecule to form. The discovery serves as proof that helium hydride can, in fact, exist in space. This confirms a key part of our basic understanding of the chemistry of the early universe and how it evolved over billions of years into the complex chemistry of today. The results are published in this week’s issue of Nature.

“This molecule was lurking out there, but we needed the right instruments making observations in the right position — and SOFIA was able to do that perfectly,” said Harold Yorke, director of the SOFIA Science Center, in California’s Silicon Valley.

Today, the universe is filled with large, complex structures such as planets, stars and galaxies. But more than 13 billion years ago, following the big bang, the early universe was hot, and all that existed were a few types of atoms, mostly helium and hydrogen. As atoms combined to form the first molecules, the universe was finally able to cool and began to take shape. Scientists have inferred that helium hydride was this first, primordial molecule.

Once cooling began, hydrogen atoms could interact with helium hydride, leading to the creation of molecular hydrogen — the molecule primarily responsible for the formation of the first stars. Stars went on to forge all the elements that make up our rich, chemical cosmos of today. The problem, though, is that scientists could not find helium hydride in space. This first step in the birth of chemistry was unproven, until now.

“The lack of evidence of the very existence of helium hydride in interstellar space was a dilemma for astronomy for decades,” said Rolf Guesten of the Max Planck Institute for Radio Astronomy, in Bonn, Germany, and lead author of the paper.

Helium hydride is a finicky molecule. Helium itself is a noble gas making it very unlikely to combine with any other kind of atom. But in 1925, scientists were able to create the molecule in a laboratory by coaxing the helium to share one of its electrons with a hydrogen ion.

Then, in the late 1970s, scientists studying the planetary nebula called NGC 7027 thought that this environment might be just right to form helium hydride. Ultraviolet radiation and heat from the aging star create conditions suitable for helium hydride to form. But their observations were inconclusive. Subsequent efforts hinted it could be there, but the mystery molecule continued to elude detection. The space telescopes used did not have the specific technology to pick out the signal of helium hydride from the medley of other molecules in the nebula.

In 2016, scientists turned to SOFIA for help. Flying up to 45,000 feet, SOFIA makes observations above the interfering layers of Earth’s atmosphere. But it has a benefit space telescopes don't— it returns after every flight.

“We’re able to change instruments and install the latest technology,” said Naseem Rangwala SOFIA deputy project scientist. “This flexibility allows us to improve observations and respond to the most pressing questions that scientists want answered.”

A recent upgrade to one of SOFIA’s instruments called the German Receiver at Terahertz Frequencies, or GREAT, added the specific channel for helium hydride that previous telescopes did not have. The instrument works like a radio receiver. Scientists tune to the frequency of the molecule they’re searching for, similar to tuning an FM radio to the right station. When SOFIA took to the night skies, eager scientists were onboard reading the data from the instrument in real time. Helium hydride’s signal finally came through loud and clear.

“It was so exciting to be there, seeing helium hydride for the first time in the data,” said Guesten. “This brings a long search to a happy ending and eliminates doubts about our understanding of the underlying chemistry of the early universe.

Scientists on the airborne observatory SOFIA detected the first type of molecule that ever formed in the universe. They found the combination of helium and hydrogen, called helium hydride, in a planetary nebula near the constellation Cygnus. This discovery confirms a key part of our basic understanding of the early universe and how it evolved over billions of years into the complex chemistry of today.


SOFIA, the Stratospheric Observatory for Infrared Astronomy, is a Boeing 747SP jetliner modified to carry a 106-inch diameter telescope. It is a joint project of NASA and the German Aerospace Center, DLR. NASA’s Ames Research Center in California’s Silicon Valley manages the SOFIA program, science and mission operations in cooperation with the Universities Space Research Association headquartered in Columbia, Maryland, and the German SOFIA Institute (DSI) at the University of Stuttgart. The aircraft is maintained and operated from NASA’s Armstrong Flight Research Center Building 703, in Palmdale, California.