Published in the journal Nature, the research shows jets from V404 Cygni’s black hole behaving in a way never seen before on such short timescales.

An animation of the precessing jets and accretion flow in V404 Cygni narrated by Associate Professor James Miller-Jones of Curtin University and ICRAR. Zooming in from the high-speed plasma clouds observed with our radio telescope, we see the binary system itself. Mass from the star spirals in towards the black hole via an accretion disk, whose inner regions are puffed up by intense radiation. The spinning black hole pulls spacetime (the green gridlines) around with it, causing the inner disk to precess like a spinning top, redirecting the jets as it does so.

The jets appear to be rapidly rotating with high-speed clouds of plasma—potentially just minutes apart—shooting out of the black hole in different directions.

Lead author Associate Professor James Miller-Jones, from the Curtin University node of the International Centre for Radio Astronomy Research (ICRAR), said black holes are some of the most extreme objects in the Universe.

Artist’s impression of the black hole X-ray binary system V404 Cygni as seen from a distance. Bright spots in the jets are detected by our high angular resolution radio imaging, and move away from the black hole in different directions. 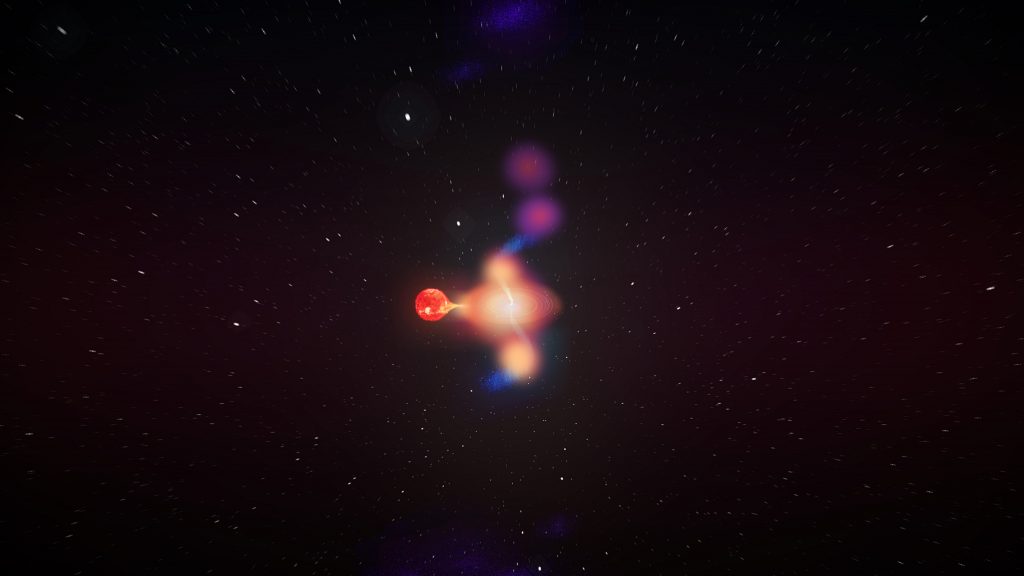 
“This is one of the most extraordinary black hole systems I’ve ever come across,” Associate Professor Miller-Jones said.

“Like many black holes, it’s feeding on a nearby star, pulling gas away from the star and forming a disk of material that encircles the black hole and spirals towards it under gravity.

Artist’s impression of V404 Cygni seen close up. The binary star system consists of a normal star in orbit with a black hole. Material from the star falls towards the black hole and spirals inwards in an accretion disk, with powerful jets being launched from the inner regions close to the black hole. 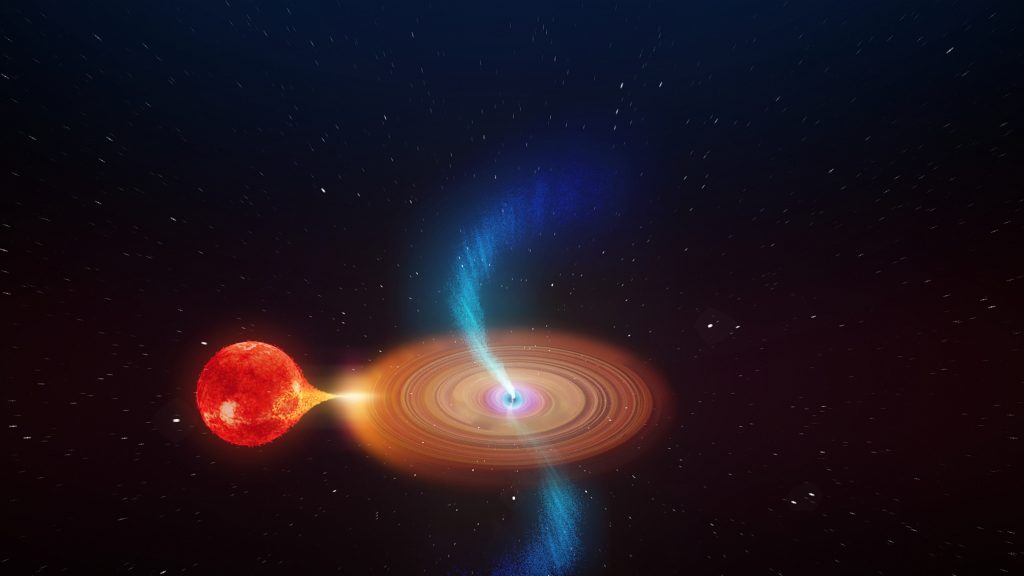 “What’s different in V404 Cygni is that we think the disk of material and the black hole are misaligned.

“This appears to be causing the inner part of the disk to wobble like a spinning top and fire jets out in different directions as it changes orientation. 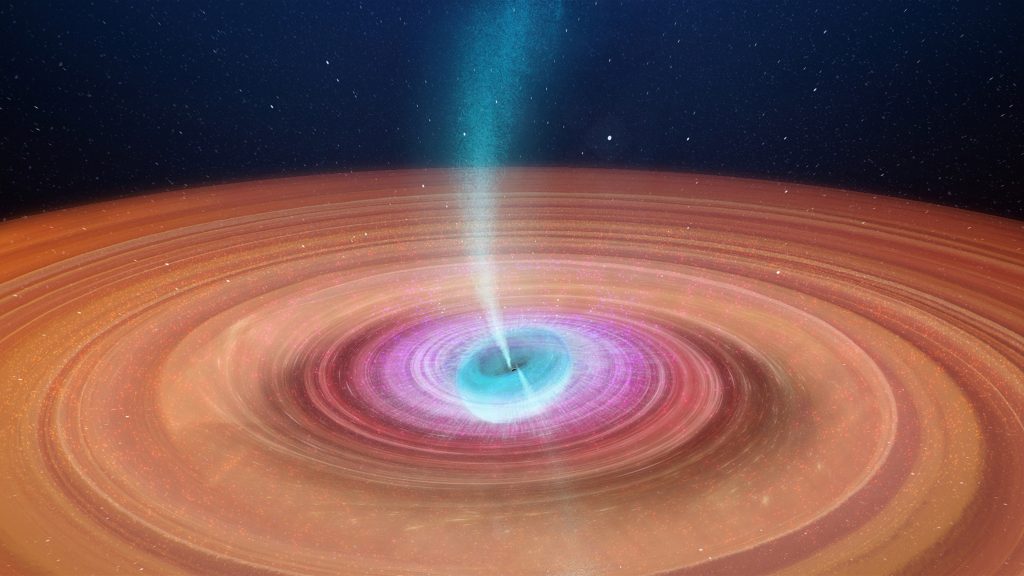 V404 Cygni was first identified as a black hole in 1989 when it released a big outburst of jets and radiation.

Astronomers looking at archival photographic plates then found previous outbursts in observations from 1938 and 1956.

Associate Professor Miller-Jones said that when V404 Cygni experienced another very bright outburst in 2015, lasting for two weeks, telescopes around the world tuned in to study what was going on.

“Everybody jumped on the outburst with whatever telescopes they could throw at it,” he said.

“So we have this amazing observational coverage.”

When Associate Professor Miller-Jones and his team studied the black hole, they saw its jets behaving in a way never seen before.

Where jets are usually thought to shoot straight out from the poles of black holes, these jets were shooting out in different directions at different times.

And they were changing direction very quickly—over no more than a couple of hours.

Artist’s impression of jet ejections in V404 Cygni. With our radio telescopes, we see individual bright clouds of plasma that have been ejected from the innermost regions, and redirected by the puffed-up inner accretion disk. 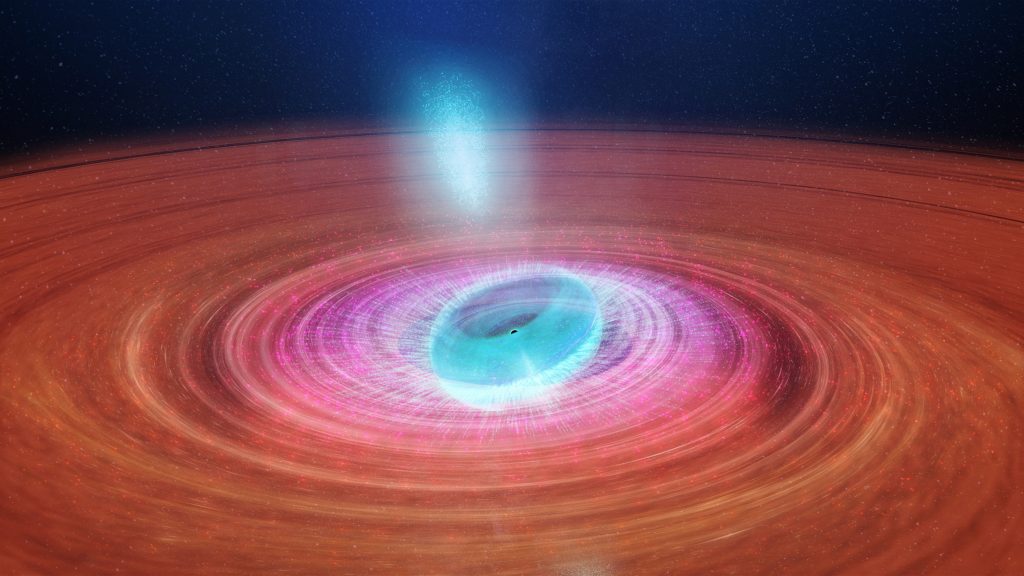 Associate Professor Miller-Jones said the change in the movement of the jets was because of the accretion disk—the rotating disk of matter around a black hole.

He said V404 Cygni’s accretion disk is 10 million kilometres wide, and the inner few thousand kilometres was puffed up and wobbling during the bright outburst.

“The inner part of the accretion disk was precessing and effectively pulling the jets around with it,” Associate Professor Miller-Jones said.

“You can think of it like the wobble of a spinning top as it slows down—only in this case, the wobble is caused by Einstein’s theory of general relativity.”

Artist’s impression of twisted space-time around the spinning black hole. The black hole is so dense that it creates a rupture in the very fabric of space time, seen here as the infinitely deep well in the centre. As the black hole spins, it drags spacetime around with it, giving rise to the twisting of the spacetime grid shown here. This leads to the precession of the inner puffed-up accretion disk. 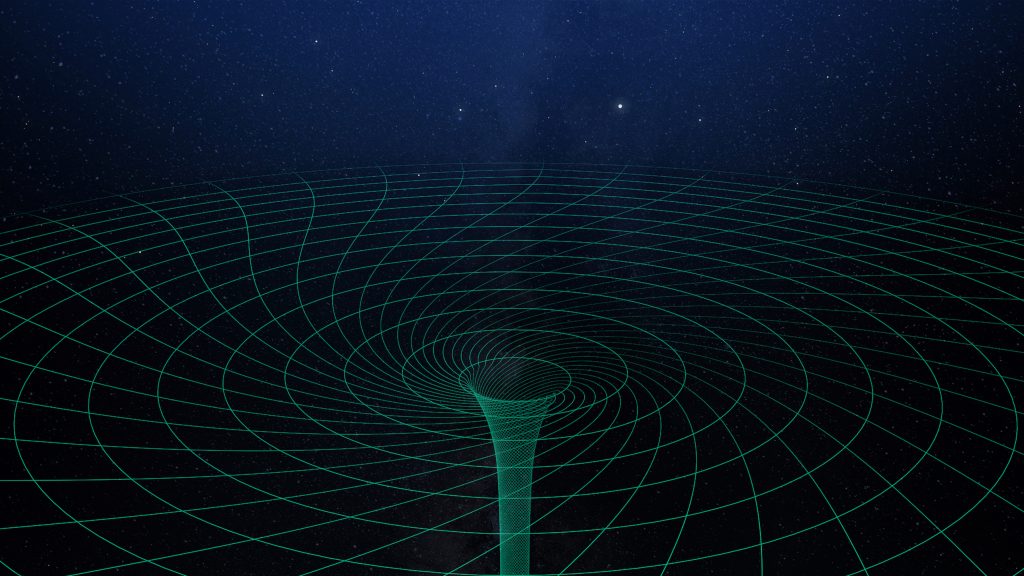 The research used observations from the Very Long Baseline Array, a continent-sized radio telescope made up of 10 dishes across the United States, from the Virgin Islands in the Caribbean to Hawaii.

Co-author Alex Tetarenko—a recent PhD graduate from the University of Alberta and currently an East Asian Observatory Fellow working in Hawaii—said the speed the jets were changing direction meant the scientists had to use a very different approach to most radio observations.

“But these jets were changing so fast that in a four-hour image we just saw a blur.

“It was like trying to take a picture of a waterfall with a one-second shutter speed.”

Instead, the researchers produced 103 individual images, each about 70 seconds long, and joined them together into a movie.

“It was only by doing this that we were able to see these changes over a very short time period,” Dr Tetarenko said.

Study co-author Dr Gemma Anderson, who is also based at ICRAR’s Curtin University node, said the wobble of the inner accretion disk could happen in other extreme events in the Universe too.

“Anytime you get a misalignment between the spin of a black hole and the material falling in, you would expect to see this when a black hole starts feeding very rapidly,” Dr Anderson said.

Movie made from our high-resolution radio images taken on 22nd June, 2015 with the National Science Foundation’s Very Long Baseline Array. It shows clouds of plasma in the precessing jets moving away from the black hole in different directions. The scale of the images is approximately the size of our Solar System, and time is shown by the clock.
Credit: ICRAR and the University of Alberta

“That could include a whole bunch of other bright, explosive events in the Universe, such as supermassive black holes feeding very quickly or tidal disruption events, when a black hole shreds a star.”