Evidence of What Caused the Biggest Natural Catastrophe on Earth

Researchers say mercury buried in ancient rock provides the strongest evidence yet that volcanoes caused the biggest mass extinction in the history of the Earth.

The extinction 252 million years ago was so dramatic and widespread that scientists call it “the Great Dying.” The catastrophe killed off more than 95 percent of life on Earth over the course of hundreds of thousands of years.

Paleontologists with the University of Cincinnati and the China University of Geosciences said they found a spike in mercury in the geologic record at nearly a dozen sites around the world, which provides persuasive evidence that volcanic eruptions were to blame for this global cataclysm.

The discovery of a spike of mercury in 252-million-year-old rock at locations around the world gives evidence for the prevailing theory that volcanic eruptions caused the mass extinction that killed off 95 percent of life on Earth. 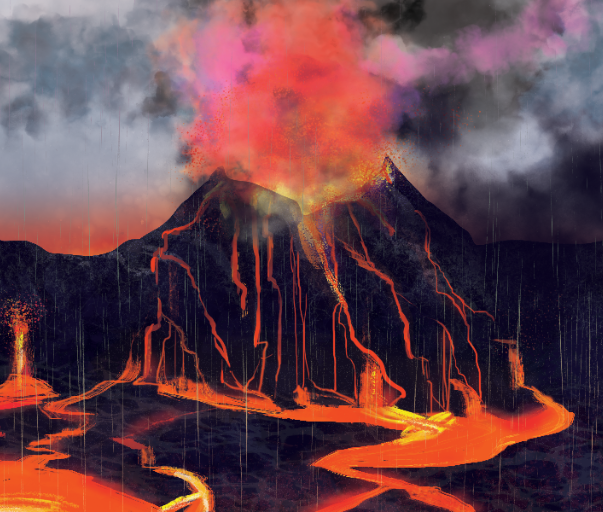 
The eruptions ignited vast deposits of coal, releasing mercury vapor high into the atmosphere. Eventually, it rained down into the marine sediment around the planet, creating an elemental signature of a catastrophe that would herald the age of dinosaurs.

“Volcanic activities, including emissions of volcanic gases and combustion of organic matter, released abundant mercury to the surface of the Earth,” said lead author Jun Shen, an associate professor at the China University of Geosciences.

The mass extinction occurred at what scientists call the Permian-Triassic Boundary. The mass extinction killed off much of the terrestrial and marine life before the rise of dinosaurs. Some were prehistoric monsters in their own right, such as the ferocious gorgonopsids that looked like a cross between a sabre-toothed tiger and a Komodo dragon.

The eruptions occurred in a volcanic system called the Siberian Traps in what is now central Russia. Many of the eruptions occured not in cone-shaped volcanoes but through gaping fissures in the ground. The eruptions were frequent and long-lasting and their fury spanned a period of hundreds of thousands of years. “Typically, when you have large, explosive volcanic eruptions, a lot of mercury is released into the atmosphere,” said Thomas Algeo, a professor of geology in UC’s McMicken College of Arts and Sciences.

“Mercury is a relatively new indicator for researchers. It has become a hot topic for investigating volcanic influences on major events in Earth’s history,” Algeo said.


Researchers use the sharp fossilized teeth of lamprey-like creatures called conodonts to date the rock in which the mercury was deposited. Like most other creatures on the planet, conodonts were decimated by the catastrophe.

The eruptions propelled as much as 3 million cubic kilometers of ash high into the air over this extended period. To put that in perspective, the 1980 eruption of Mount St. Helens in Washington sent just 1 cubic kilometer of ash into the atmosphere, even though ash fell on car windshields as far away as Oklahoma.

In fact, Algeo said, the Siberian Traps eruptions spewed so much material in the air, particularly greenhouse gases, that it warmed the planet by an average of about 10 degrees centigrade.

The warming climate likely would have been one of the biggest culprits in the mass extinction, he said. But acid rain would have spoiled many bodies of water and raised the acidity of the global oceans. And the warmer water would have had more dead zones from a lack of dissolved oxygen.

“We’re often left scratching our heads about what exactly was most harmful. Creatures adapted to colder environments would have been out of luck,” Algeo said. “So my guess is temperature change would be the No. 1 killer. Effects would exacerbated by acidification and other toxins in the environment.”

Stretching over an extended period, eruption after eruption prevented the Earth’s food chain from recovering.

“It’s not necessarily the intensity but the duration that matters,” Algeo said. “The longer this went on, the more pressure was placed on the environment.”

Likewise, the Earth was slow to recover from the disaster because the ongoing disturbances continued to wipe out biodiversity, he said.

Scientists used another elemental signature — iridium — to pin down the likely cause of the global mass extinction that wiped out the dinosaurs 65 million years ago. They believe an enormous meteor struck what is now Mexico. The resulting plume of superheated earth blown into the atmosphere rained down material containing iridium that is found in the geologic record around the world.

Shen said the mercury signature provides convincing evidence that the Siberian Traps eruptions were responsible for the catastrophe. Now researchers are trying to pin down the extent of the eruptions and which environmental effects in particular were most responsible for the mass die-off, particularly for land animals and plants.

“The release of carbon into the atmosphere by human beings is similar to the situation in the Late Permian, where abundant carbon was released by the Siberian eruptions,” Shen said.

Algeo said it is cause for concern.

“A majority of biologists believe we’re at the cusp of another mass extinction — the sixth big one. I share that view, too,” Algeo said. “What we should learn is this will be serious business that will harm human interests so we should work to minimize the damage.”

People living in marginal environments such as arid deserts will suffer first. This will lead to more climate refugees around the world.

“We’re likely to see more famine and mass migration in the hardest hit places. It’s a global issue and one we should recognize and proactively deal with. It’s much easier to address these problems before they reach a crisis.”
An endangered mountain gorilla basks in the sun in Uganda's Bwindi Impenetrable Forest. UC professor Thomas Algeo and other scientists warn that we are on the cusp of another mass extinction caused by a factors such as habitat loss and climate change. P The study was published this month in the journal Nature Communications.

The project demonstrate UC’s commitment to research as outlined in its strategic plan, called Next Lives Here.