Brown dwarfs fill the “gap” between stars and the much smaller planets – two very different types of astronomical objects. But how they originate has yet to be fully explained. Astronomers from Heidelberg University may now be able to answer that question. They discovered that the star ν Ophiuchi in the Milky Way is being orbited by two brown dwarfs, which in all probability formed along with the star from a gas and dust disk, just as planets do. The research results were published in “Astronomy & Astrophysics”.

Artist rendering of a brown dwarf. They are more massive and hotter than planets but lack the nuclear fusion in their core as in normal stars. Two such “failed” stars were detected orbiting the star ν Ophiuchi. They were probably formed in the earlier protoplanetary disk of the star. 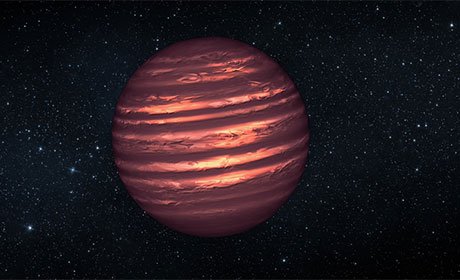 Brown dwarfs orbit either one star or travel in isolation in the vast expanse of the Milky Way. Their mass – they are at least 13 times heavier than the planet Jupiter – is sufficient to generate, at least temporarily, energy in their core through nuclear fusion. They are not sufficiently massive, however, to ignite hydrogen in their cores and hence to create their own light. The heat they continue to radiate after formation is how astronomers are able to locate them. It is estimated that up to 100 billion brown dwarfs make their home in the Milky Way. Yet it remains unclear how they form – whether they are “failed” stars or possibly even super-planets.

The recent discoveries made at the Centre for Astronomy of Heidelberg University (ZAH) could provide an answer. Prof. Dr Andreas Quirrenbach and his team at the Königstuhl State Observatory of the ZAH analysed the variations in radial velocity of the star ν Ophiuchi. Using telescopes in the USA and Japan, the Heidelberg astronomers and others measured the velocity of the star for 11 years. The star has a mass slightly greater than two and half times that of the Sun, and is located approximately 150 light years from Earth in the constellation Ophiuchus.

Periodic variations of the radial velocity of ν Ophiuchi over a period of about ten years caused by two circulating brown dwarfs. The blue, green and red data points come from telescopes in California, Japan and Chile. The regular movement in the rhythm of approximately 530 days is caused by the inner brown dwarf. At the third and ninth time a particularly high speed is reached – this points to the existence of the outer brown dwarf, which has exactly six times the circulation time. 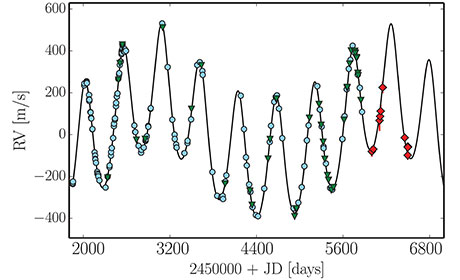 The Heidelberg team noticed a certain pattern in the measurements, similar to those caused by orbiting planets or binary stars, which is usually nothing out of the ordinary. But in this case, in-depth analysis of the data revealed something extraordinary: apparently, ν Ophiuchi is being orbited by two brown dwarfs with an orbital period of approximately 530 and 3,185 days, which puts them in a 6:1 resonant configuration. So, the brown dwarf closest to ν Ophiuchi orbits its star exactly six times while the other, more distant brown dwarf completes only one orbit.

This discovery sheds completely new light on the evolution of brown dwarfs. Do they develop exclusively like normal stars in interstellar clouds, or can they also form in the so-called protoplanetary disk of gas and dust that surrounds the parent star in the early phase of its formation? “The 6:1 resonance is a strong indication for the latter scenario,” explains Prof. Quirrenbach. “Only then could the orbits of the newly developing brown dwarfs adjust to a stable resonance over millions of years.”

That is what the extensive dynamic analyses for possible configurations of the ν Ophiuchi system suggest, reports the researcher. This superplanetary system is the first of its kind as well as the first sure sign that brown dwarfs can form in a protoplanetary disk, Prof. Quirrenbach stresses. The researcher and his team hope for other such discoveries that may one day allow them to clarify how many of the “failed” stars are actually more massive siblings of Jupiter and Saturn.