An Army of Micro-Robots Attacks and Wipes Out Dental Plaque

A visit to the dentist typically involves time-consuming and sometimes unpleasant scraping with mechanical tools to remove plaque from teeth. What if, instead, a dentist could deploy a small army of tiny robots to precisely and non-invasively remove that buildup?

With a precise, controlled movement, microrobots cleared a glass plate of a biofilm, as shown in this time-lapse image. 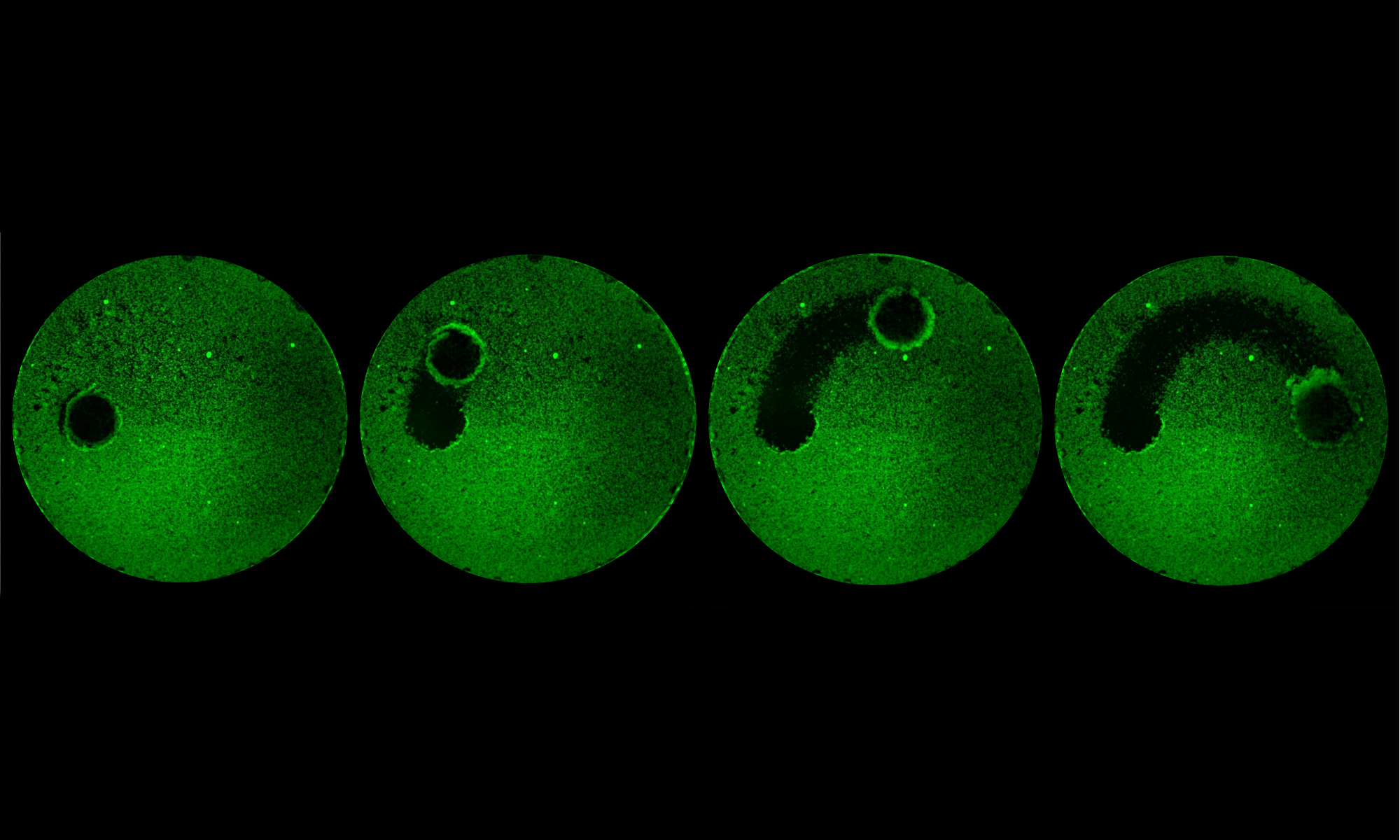 A team of engineers, dentists, and biologists from the University of Pennsylvania developed a microscopic robotic cleaning crew. With two types of robotic systems—one designed to work on surfaces and the other to operate inside confined spaces—the scientists showed that robots with catalytic activity could ably destroy biofilms, sticky amalgamations of bacteria enmeshed in a protective scaffolding.

Such robotic biofilm-removal systems could be valuable in a wide range of potential applications, from keeping water pipes and catheters clean to reducing the risk of tooth decay, endodontic infections, and implant contamination.

The robots' movement is directed by magnets. The researchers envision a variety of applications for the technology, from cleaning teeth to water pipes to catheters.

The work, published in Science Robotics, was led by Hyun (Michel) Kooof the School of Dental Medicine and Edward Steager of the School of Engineering and Applied Science.

“This was a truly synergistic and multidisciplinary interaction,” says Koo. “We’re leveraging the expertise of microbiologists and clinician-scientists as well as engineers to design the best microbial eradication system possible. This is important to other biomedical fields facing drug-resistant biofilms as we approach a post-antibiotic era.”

“Treating biofilms that occur on teeth requires a great deal of manual labor, both on the part of the consumer and the professional,” adds Steager. “We hope to improve treatment options as well as reduce the difficulty of care.”

Biofilms can arise on biological surfaces, such as on a tooth or in a joint or on objects, like water pipes, implants, or catheters. Wherever biofilms form, they are notoriously difficult to remove, as the sticky matrix that holds the bacteria provides protection from antimicrobial agents.

In previous work, Koo and colleagues have made headway at breaking down the biofilm matrix with a variety of outside-the-box methods. One strategy has been to employ iron-oxide-containing nanoparticles that work catalytically, activating hydrogen peroxide to release free radicals that can kill bacteria and destroy biofilms in a targeted fashion.

Serendipitously, the Penn Dental Medicine team found that groups at Penn Engineering led by Steager, Vijay Kumar, and Kathleen Stebe were working with a robotic platform that used very similar iron-oxide nanoparticles as building blocks for microrobots. The engineers control the movement of these robots using a magnetic field, allowing a tether-free way to steer them.

Together, the cross-school team designed, optimized, and tested two types of robotic systems, which the group calls catalytic antimicrobial robots, or CARs, capable of degrading and removing biofilms. The first involves suspending iron-oxide nanoparticles in a solution, which can then be directed by magnets to remove biofilms on a surface in a plow-like manner. The second platform entails embedding the nanoparticles into gel molds in three-dimensional shapes. These were used to target and destroy biofilms clogging enclosed tubes.

Both types of CARs effectively killed bacteria, broke down the matrix that surrounds them, and removed the debris with high precision. After testing the robots on biofilms growing on either a flat glass surface or enclosed glass tubes, the researchers tried out a more clinically relevant application: Removing biofilm from hard-to-reach parts of a human tooth.

The CARs were able to degrade and remove bacterial biofilms not just from a tooth surface but from one of the most difficult-to-access parts of a tooth, the isthmus, a narrow corridor between root canals where biofilms commonly grow.

“Existing treatments for biofilms are ineffective because they are incapable of simultaneously degrading the protective matrix, killing the embedded bacteria, and physically removing the biodegraded products,” says Koo. “These robots can do all three at once very effectively, leaving no trace of biofilm whatsoever.”

The team’s micro-robots were effective at cleaning hard-to-reach surfaces. This time-lapse image shows one of the molded, helicoid-shaped robots traveling inside a tooth canal. 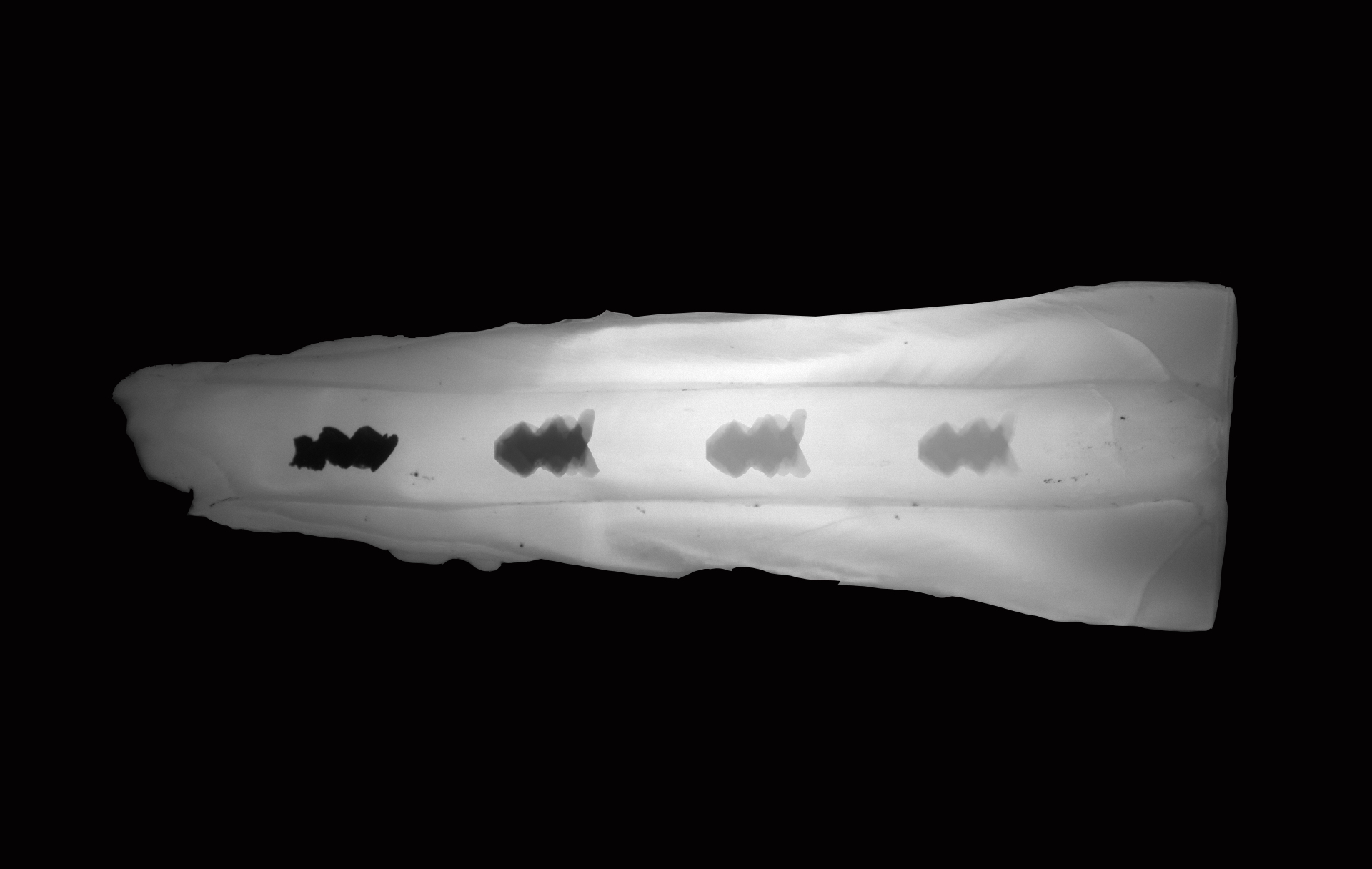 By plowing away the degraded remains of the biofilm, Koo says, the chance of it taking hold and re-growing decreases substantially. The researchers envision precisely directing these robots to wherever they need to go to remove biofilms, be it the inside of a cathether or a water line or difficult-to-reach tooth surfaces.

“We think about robots as automated systems that take actions based on actively gathered information,” says Steager. In this case, he says, “the motion of the robot can be informed by images of the biofilm gathered from microcameras or other modes of medical imaging.”

To move the innovation down the road to clinical application, the researchers are receiving support from the Penn Center for Health, Devices, and Technology, an initiative supported by Penn’s Perelman School of Medicine, Penn Engineering, and the Office of the Vice Provost for Research. Penn Health-Tech, as it’s known, awards select interdisciplinary groups with support to create new health technologies, and the robotic platforms project was one of those awarded support in 2018.

“The team has a great clinical background on the dental side and a great technical background on the engineering side,” says Victoria Berenholz, executive director of Penn Health-Tech. “We help to round them out by connecting them to business mentors and resources within the Penn community to translate their technology. They have really done a fantastic job on the project.”

In addition to Koo, Steager, Stebe, and Kumar, the study was coauthored by first author Geelsu Hwang, Amauri J. Paula, Yuan Liu, Alaa Babeer, and Bekir Karabucak, all of the School of Dental Medicine, and Elizabeth E. Hunter of the School of Engineering and Applied Science.

The study was supported in part by the National Institute for Dental and Craniofacial Research (grants DE025848 and DE018023) and National Science Foundation.

Hyun (Michel) Koo is a professor in the Penn Dental Medicine Department of Orthodontics and in the divisions of Pediatric Dentistry and Community Oral Health.

Edward Steager is a research investigator in the School of Engineering and Applied Science’s General Robotics, Automation, Sensing and Perception Laboratory (GRASP Lab).

Vijay Kumar is the Nemirovsky Family Dean of Penn Engineering with appointments in the departments of Mechanical Engineering and Applied Mechanics, Computer and Information Science, and Electrical and Systems Engineering.

Kathleen Stebe is the Richer and Elizabeth Goodwin Professor of Chemical and Biomolecular Engineering in the School of Engineering and Applied Science.