In “Testing Darwin’s Hypothesis about the Wonderful Venus Flytrap: Marginal Spikes Form a ‘Horrid Prison’ for Moderate-Sized Insect Prey,” Alexander L. Davis investigates the importance of marginal spikes, the “teeth” lining the outer edge of the plant’s snap traps, in successfully capturing prey. He found that Venus flytraps experience a 90 percent decrease in moderate-sized cricket prey capture success when marginal spikes are removed. This effect disappears, however, for larger prey, suggesting that the spikes may provide a foothold for large prey to escape.

The study combined field observations, laboratory experiments and semi-natural experiments, and was the first to test the adaptive benefit of marginal spikes, one of Darwin’s original hypotheses about the Venus flytrap. “We provide the first direct test of how prey capture performance is affected by the presence of marginal spikes, trichomes that provide a novel function in Venus flytraps by forming what Darwin described as a ‘horrid prison,’” Davis writes. 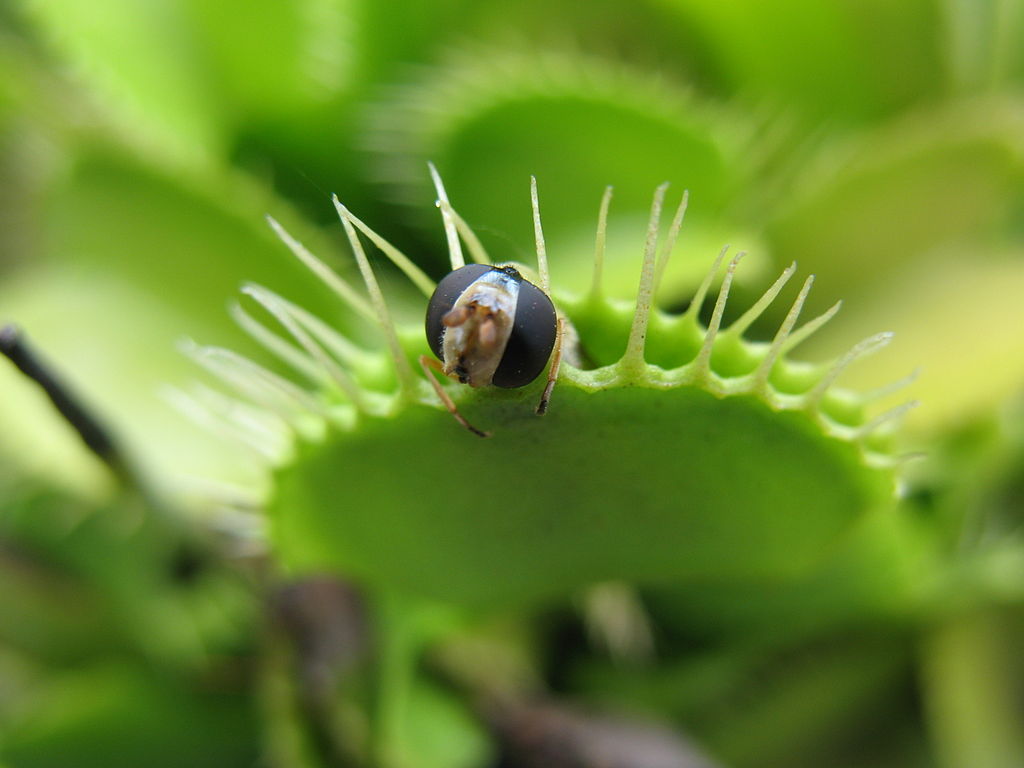 Botanical carnivory is a novel feeding strategy that has arisen at least nine different times in evolutionary history of plants. Pitfall traps evolved independently at least six times and sticky traps five. The snap traps characteristic of the Venus flytrap, however, have most likely evolved only once in the ancestral lineage. Darwin was the first to document evidence for carnivory in flytraps, and proposed that the cage-like structure enhances prey capture success.

For the laboratory portion, Davis and his coauthors assembled “prey capture arenas,” wherein 34 Venus flytraps were set up in planters with “on ramps” for crickets. The number of individual traps open and closed, along with whether or not the closed traps contained prey, were recorded initially, after three days, and again after a week. Davis then removed the marginal spikes from half of the plants. He allowed a week of recovery so the traps could reopen, and conducted a second trial. Cricket mass, the length of the plants’ traps, and the prey capture success rate of the traps on each plant were recorded and analyzed using logistic regression models.

Davis and coauthors then moved to a semi-natural experiment in the North Carolina Botanical Garden. Davis placed 22 plants in the North Carolina Botanical Garden, with half of the traps on each plant with intact marginal spikes and the other half with the spikes removed. Plants were kept on the group in a forested, open area of the gardens, and with ramps that allowed terrestrial arthropod access for a period of 4 weeks. For all prey catches, trap length, as well as prey mass and — digestion permitting — prey type, were recorded. Results were calculated using a generalized linear mixed effects model, then combined with results from the laboratory experiments using Fisher’s method.

The benefits of the marginal spikes were most dramatic for medium-size traps, which experienced the most rapid decline in capture rate for medium-size prey and gained the most from having the marginal spikes intact. Surprisingly, this effect disappeared for larger prey, which Davis speculated could be due to larger insects using the spikes as leverage for prying themselves free.

These findings offer clues for explaining the evolution of one of the most unique plant traits. “Characterizing the role of adaptive traits aids our understanding of selective forces underlying the diversity of trap types and the rarity of snap traps, offering insights into the origins of one of the most wonderful evolutionary innovations among all plants,” Davis writes.

Since its inception in 1867, The American Naturalist has maintained its position as one of the world's premier peer-reviewed publications in ecology, evolution, and behavior research. Its goals are to publish articles that are of broad interest to the readership, pose new and significant problems, introduce novel subjects, develop conceptual unification, and change the way people think. AmNat emphasizes sophisticated methodologies and innovative theoretical syntheses—all in an effort to advance the knowledge of organic evolution and other broad biological principles.