NASA’s new Transiting Exoplanet Survey Satellite (TESS) is designed to ferret out habitable exoplanets, but with hundreds of thousands of sunlike and smaller stars in its camera views, which of those stars could host planets like our own?

TESS will observe 400,000 stars across the whole sky to catch a glimpse of a planet transiting across the face of its star, one of the primary methods by which exoplanets are identified.

A team of astronomers from Cornell, Lehigh University and Vanderbilt University has identified the most promising targets for this search in the new “TESS Habitable Zone Star Catalog,” published March 26 in Astrophysical Journal Letters. Lead author Lisa Kaltenegger, professor of astronomy in the College of Arts and Sciences and director of Cornell’s Carl Sagan Institute, is a member of the TESS science team.

Artists’ concept of the Transiting Exoplanet Survey Satellite against a background of stars and orbiting planets in the Milky Way. 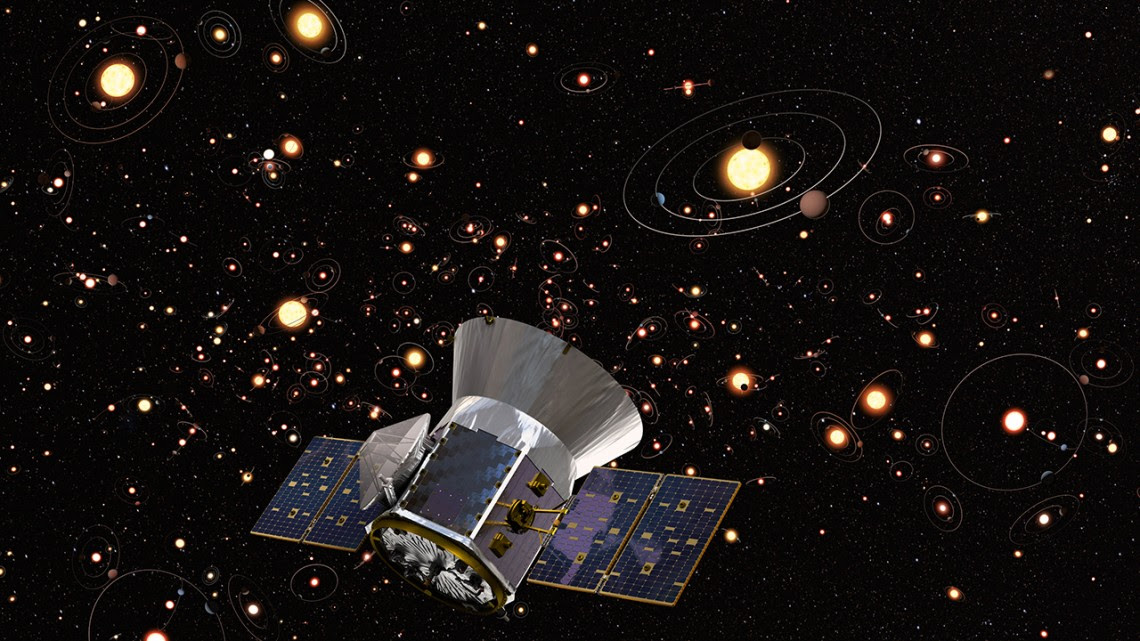 The catalog identifies 1,822 stars for which TESS is sensitive enough to spot Earth-like planets just a bit larger than Earth that receive radiation from their star equivalent to what Earth receives from our sun. For 408 stars, TESS can glimpse a planet just as small as Earth, with similar irradiation, in one transit alone.

“Life could exist on all sorts of worlds, but the kind we know can support life is our own, so it makes sense to first look for Earth-like planets,” Kaltenegger said. “This catalog is important for TESS because anyone working with the data wants to know around which stars we can find the closest Earth-analogs.”

Kaltenegger leads a program on TESS that is observing the catalog’s 1,822 stars in detail, looking for planets. “I have 408 new favorite stars,” said Kaltenegger. “It is amazing that I don’t have to pick just one; I now get to search hundreds of stars.”

Confirming an exoplanet has been observed and figuring out the distance between it and its star requires detecting two transits across the star. The 1,822 stars the researchers have identified in the catalog are ones from which TESS could detect two planetary transits during its mission. Those orbital periods place them squarely in the habitable zone of their star.

The habitable zone is the area around a star at which water can be liquid on a rocky planet’s surface, therefore considered ideal for sustaining life. As the researchers note, planets outside the habitable zone could certainly harbor life, but it would be extremely difficult to detect any signs of life on such frozen planets without flying there.

The catalog also identifies a subset of 227 stars for which TESS can not only probe for planets that receive the same irradiation as Earth, but for which TESS can also probe out farther, covering the full extent of the habitable zone all the way to cooler Mars-like orbits. This will allow astronomers to probe the diversity of potentially habitable worlds around hundreds of cool stars during the TESS mission’s lifetime.

The stars selected for the catalog are bright, cool dwarfs, with temperatures roughly between 2,700 and 5,000 degrees Kelvin. The stars in the catalog are selected due to their brightness; the closest are only approximately 6 light-years from Earth.

“We don’t know how many planets TESS will find around the hundreds of stars in our catalog or whether they will be habitable,” Kaltenegger said, “but the odds are in our favor. Some studies indicate that there are many rocky planets in the habitable zone of cool stars, like the ones in our catalog. We’re excited to see what worlds we’ll find.”

For the first time in human history, we have the technology to search for life and, if it’s there, to find it. Lisa Kaltenegger, professor of astronomy and director of the Carl Sagan Institute, shares what inspires her scientific curiosity, and how Cornell’s scientists work together to search for alien life in a new and colorful way. Kaltenegger's research focuses on the characterization of habitable worlds. Credit: Cornell Brand Communications
A total of 137 stars in the catalog are within the continuous viewing zone of NASA’s James Webb Space Telescope, now under construction. Webb will be able to observe them to characterize planetary atmospheres and search for signs of life in their atmospheres.

Planets TESS identifies may also make excellent targets for observations by ground-based extremely large telescopes currently being built, the researchers note, as the brightness of their host stars would make them easier to characterize.

In addition to Kaltenegger, Joshua Pepper of Lehigh University and Keivan Stassun and Ryan Oelkers of Vanderbilt University contributed to the catalog, which draws from one originally developed at Vanderbilt that contains hundreds of millions of stars.

“This is a remarkable time in human history and a huge leap for our understanding of our place in the universe,” said Stassun, a member of the TESS science team.


Contacts and sources:
Linda B. Glaser