Glaciers that drain ice sheets such as Antarctica or Greenland often flow into the ocean, ending in near-vertical cliffs. As the glacier flows into the sea, chunks of the ice break off in calving events. Although much calving occurs when the ocean melts the front of the ice, and ice cliff above falls down, a new study presents another method of calving: slumping. And this process could break off much larger chunks of ice at a quicker rate.

The ice-cliff research was spurred by a helicopter ride over Jakobshavn and Helheim glaciers on Greenland's eastern coast. Helheim ends abruptly in the ocean, in near-vertical ice-cliffs reaching 30-stories high (100 meters). On the flight, scientists viewed large cracks (called crevasses) on top of the ice that marched towards the end of the glacier.

"Geologists have spent decades -- centuries -- worrying about slumps," says Richard Alley, co-author of the new paper in Geology. A slump occurs when mass of rock or sediment loses some of its strength, breaks away from its neighboring land, and slides down a slope. Typically, slumps are marked by a steep scarp where the material broke away, followed by a block of material moved downslope. 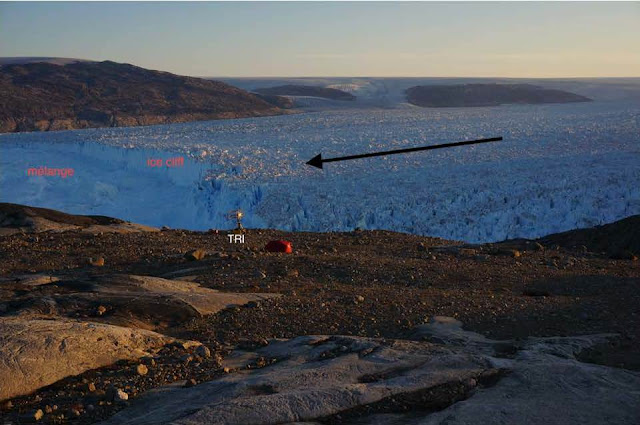 Alley says the research team noted that features on Helheim glacier are typical of what you might see in a slump-prone terrestrial landscape and they wondered if ice might suffer the same fate. "You've got a crevasse that serves as a head scarp and then you've got the stresses [within the ice] maximized down at the water level," he says.

To test if slumping occurs on ice cliffs, the team monitored Helheim glacier during a calving event, using real-aperture terrestrial radar interferometery. They measured speed, position, and motion of the calving ice. The researchers observed an ice-flow acceleration just before an initial slump, followed by a rotating, full ice-thickness calving of the glacier -- including the entire remaining ice-cliff, reaching both above and below the water line.

Removing the weight of the upper ice by slumping encourages the underlying ice to pop upward. "Because it's still attached at the back, it's going to rotate a little bit," says Alley. The rotation causes a crack to form at the bottom of the glacier as the ice flexes. In turn, the crack can weaken the ice, creating a large calving event -- all triggered by the initial slump on top of the ice cliff.

After observing the slump-triggered calving event, the team modeled when slumping events were most likely to occur on an ice cliff. The modeling looked at tensile, shear, and compressive failure for ice cliffs, and included characteristics of the ice. The scientists found that cliffs reaching more than 100 meters of ice above water were likely to have slumping occur.

Alley says regular calving events happen relatively slowly, such as when the ice front melts over time, undercutting the ice and weakening the cliff. "But that's not going to go really, really, really fast because you have to wait for the melting to undercut it," he says.

With slumping, the calving occurs without waiting for the melt. "We'll go slump... basal crevasse... boom," he says, noting that when the calving happens it will take the 100 meters of ice above the water -- and the 900 meters below the water -- very quickly.

And 1000 meters of ice calving at once isn't the limit. Alley says that in some places in Antarctica, the glacial ice bed can be 1500 to 2000 meters below sea level, creating a much taller cliff above water. He says the worry is that taller cliffs are even more susceptible to slumping. "The scary thing is that if pieces of west Antarctica start doing what Helheim is doing then over the next hundred years models indicate that we get rapid sea level rise at rates that surpass those predicted," says Alley.

Understanding the slump-break process has been a collaborative effort, Alley says, and more investigations are planned for the near future. "We want to understand what are the rules for [ice] breakage by this process and others," says Alley, adding that they hope to collect more observational data as well as refine their models to better understand the slump-break process. "There's still work to be done."

The research was supported by NASA, the National Science Foundation, and the New York University Abu Dhabi Research Institute.