A study to be published Monday in the Proceedings of the National Academy of Sciences offers a scientific first: a detailed snapshot of the terrible moments right after the Chicxulub impact — the most cataclysmic event known to have befallen life on Earth.

At a site called Tanis in North Dakota’s Hell Creek Formation, a team of paleontologists whose headquarters are at the University of Kansas unearthed a motherlode of exquisitely-preserved animal and fish fossils — creatures that lived in and around a deeply chiseled river connected to the ancient Western Interior Seaway — that were killed suddenly in events triggered by the Chicxulub impact. 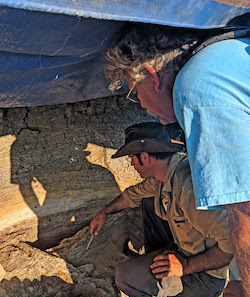 The fossils were crammed into a “rapidly emplaced high-energy onshore surge deposit” along the KT boundary that contained associated ejecta and iridium impactite associated with the impact about 66 million years ago — an impact that eradicated about 75 percent of Earth’s animal and plant species.

“A tangled mass of freshwater fish, terrestrial vertebrates, trees, branches, logs, marine ammonites and other marine creatures was all packed into this layer by the inland-directed surge,” said lead author Robert DePalma, a KU doctoral student in geology who works in the KU Biodiversity Institute and Natural History Museum. “Timing of the incoming ejecta spherules matched the calculated arrival times of seismic waves from the impact, suggesting that the impact could very well have triggered the surge.”

DePalma, who discovered the fossil motherlode, said the find outlines how the impact could have devastated areas very far from the crater quite rapidly.

“A tsunami would have taken at least 17 or more hours to reach the site from the crater, but seismic waves — and a subsequent surge — would have reached it in tens of minutes,” he said.

DePalma and his colleagues describe the rushing wave that shattered the Tanis site as a “seiche.”

“As the 2011 Tohoku earthquake in Japan showed us, seismic shaking can cause surges far from the epicenter,” he said. “In the Tohoku example, surges were triggered nearly 5,000 miles away in Norway just 30 minutes after impact. So, the KT impact could have caused similar surges in the right-sized bodies of water worldwide, giving the first rapid ‘bloody nose’ to those areas before any other form of aftermath could have reached them.”

According to KU researchers, even before the surge arrived, Acipenseriform fish (sturgeon) found at the site already had inhaled tiny spherules ejected from the Chicxulub impact.

“The fish were buried quickly, but not so quickly they didn’t have time to breathe the ejecta that was raining down to the river,” said co-author David Burnham, preparator of vertebrate paleontology at the KU Biodiversity Institute. “These fish weren’t bottom feeders, they breathed these in while swimming in the water column. We’re finding little pieces of ejecta in the gill rakers of these fish, the bony supports for the gills. We don’t know if some were killed by breathing this ejecta, too.”

A shocked mineral from Tanis

The number and quality of preservation of the fossils at Tanis are such that Burnham dubs it the “lagerstätte” of the KT event — paleontologist-speak for a landmark sedimentary deposit with exceptionally intact specimens. He said this is especially true as the fish are cartilaginous, not bony, and are less prone to fossilization.

“The sedimentation happened so quickly everything is preserved in three dimensions — they’re not crushed,” Burnham said. “It’s like an avalanche that collapses almost like a liquid, then sets like concrete. They were killed pretty suddenly because of the violence of that water. We have one fish that hit a tree and was broken in half.”

Indeed, the Tanis site contains many hundreds of articulated ancient fossil fish killed by the Chicxulub impact’s aftereffects and is remarkable for the biodiversity it reveals alone.

“At least several appear to be new species, and the others are the best examples known of their kind,” DePalma said. “Before now, fewer than four were known from the Hell Creek, so the site was already magnificently significant. But we quickly recognized that the surrounding sediment was deposited by a sudden, massive rush of water, and that the surge was directed inland, away from an ancient nearby seaway. When we noticed asteroid impact debris within the sediment and a compact layer of KT boundary clay resting on top of it from the long-term fallout, we realized that this unusual site was right at the KT boundary.”

According to Burnham, the fossil trove fills a void in scientific knowledge with vivid new detail.

A small fragment of a marine annemite shell found in the freshwater Tanis deposit. 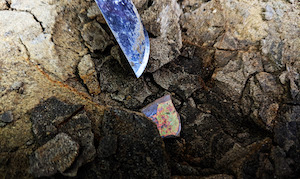 “We’ve understood that bad things happened right after the impact, but nobody’s found this kind of smoking-gun evidence,” he said. “People have said, ‘We get that this blast killed the dinosaurs, but why don’t we have dead bodies everywhere?’ Well, now we have bodies. They’re not dinosaurs, but I think those will eventually be found, too.”

DePalma said his find provides spectacular new detail to what is perhaps the most important event to ever affect life on Earth.

“It’s difficult not to get choked up and passionate about this topic,” he said. “We look at moment-by-moment records of one of the most notable impact events in Earth’s history. No other site has a record quite like that. And this particular event is tied directly to all of us — to every mammal on Earth, in fact. Because this is essentially where we inherited the planet. Nothing was the same after that impact. It became a planet of mammals rather than a planet of dinosaurs.

"As human beings, we descended from a lineage that literally survived in the ashes of what was once the glorious kingdom of the dinosaurs. And we’re the only species on the planet that has ever been capable of learning from such an event to the benefit of ourselves and every other organism in our world.”

At KU, DePalma and Burnham worked with Loren Gurche of the Biodiversity Institute. Other co-authors are Jan Smit and Klaudia Kuiper of VU University Amsterdam; Phillip Manning of the University of Manchester; Anton Oleinik of Florida Atlantic University; Peter Larson of the Black Hills Institute of Geological Research Inc.; Florentin Maurrasse of Florida International University; Johan Vellekoop of VU Leuven; and Mark A. Richards and Walter Alvarez of the University of California at Berkeley.


Contacts and sources:
Brendan M. Lynch
The University of Kansas