Batteries power most of our devices, and even some cars. But researchers now report in ACS Applied Materials & Interfaces a step toward running electronic devices in homes and offices on the light coming from lamps scattered around the room. The team developed special light harvesters, like those used for solar power, optimized to produce energy from ambient indoor lighting.

Light coming from lamps scattered around the room could one day be used to run electronic devices, thanks to special light harvesters. 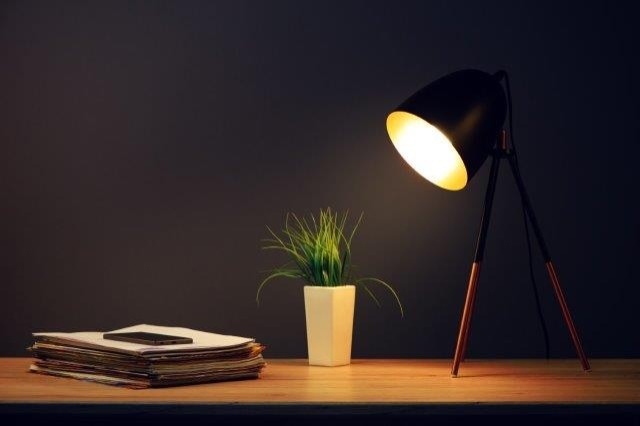 Electronic gadgets increasingly are becoming indispensable. Smart thermostats learn when to turn up the heat, sensors set off alarms when windows are opened, and cell phones keep people connected. In the coming “internet of things,” more and more of these items will be connected wirelessly to the internet, communicating to each other and performing the functions of everyday life. Most of these gadgets run on batteries, but they need to be replaced and can be bulky.

Solar power is a possible alternative, but the sun doesn’t always shine when devices need to work. Artificial room lighting, however, is all around — in homes, schools, offices, stores — and can be controlled on demand. To put room lighting to work, Ryota Arai, Takuma Yasuda and colleagues turned to organic photovoltaics (OPVs), which are light, flexible and transparent.

To determine the best configuration for OPVs, the researchers tested small-molecule organic semiconductors that appeared to have promising characteristics for harvesting ambient light. OPVs based on the small molecule called BDT-2T-ID outperformed other similar devices, even one based on silicon solar technology. A set of six of these devices connected in series could produce about 4 volts under dim illumination to power microsensors. Much needs to be done to scale up the technology, but the team says it could someday be a viable way to power wireless devices throughout a room.

The authors acknowledge funding from the Japan Society for the Promotion of Science.