No One Is Quite Sure What It Is Made Of

Researchers from Russia, Finland, and the U.S. have put a constraint on the theoretical model of dark matter particles by analyzing data from astronomical observations of active galactic nuclei. The new findings provide an added incentive for research groups around the world trying to crack the mystery of dark matter: No one is quite sure what it is made of. The paper was published in the Journal of Cosmology and Astroparticle Physics.

The question of what particles make up dark matter is a crucial one for modern particle physics. Despite the expectations that dark matter particles would be discovered at the Large Hadron Collider, this did not happen. A number of then-mainstream hypotheses about the nature of dark matter had to be rejected. Diverse observations indicate that dark matter exists, but apparently something other than the particles in the Standard Model constitutes it. Physicists thus have to consider further options that are more complex. The Standard Model needs to be extended. Among the candidates for inclusion are hypothetical particles that may have masses in the range from 10?²? to 10?¹? times the mass of the electron. That is, the heaviest speculated particle has a mass 40 orders of magnitude greater than that of the lightest.

This image of Centaurus A, one of the closest active galaxies to Earth, combines the data from observations in multiple frequency ranges. 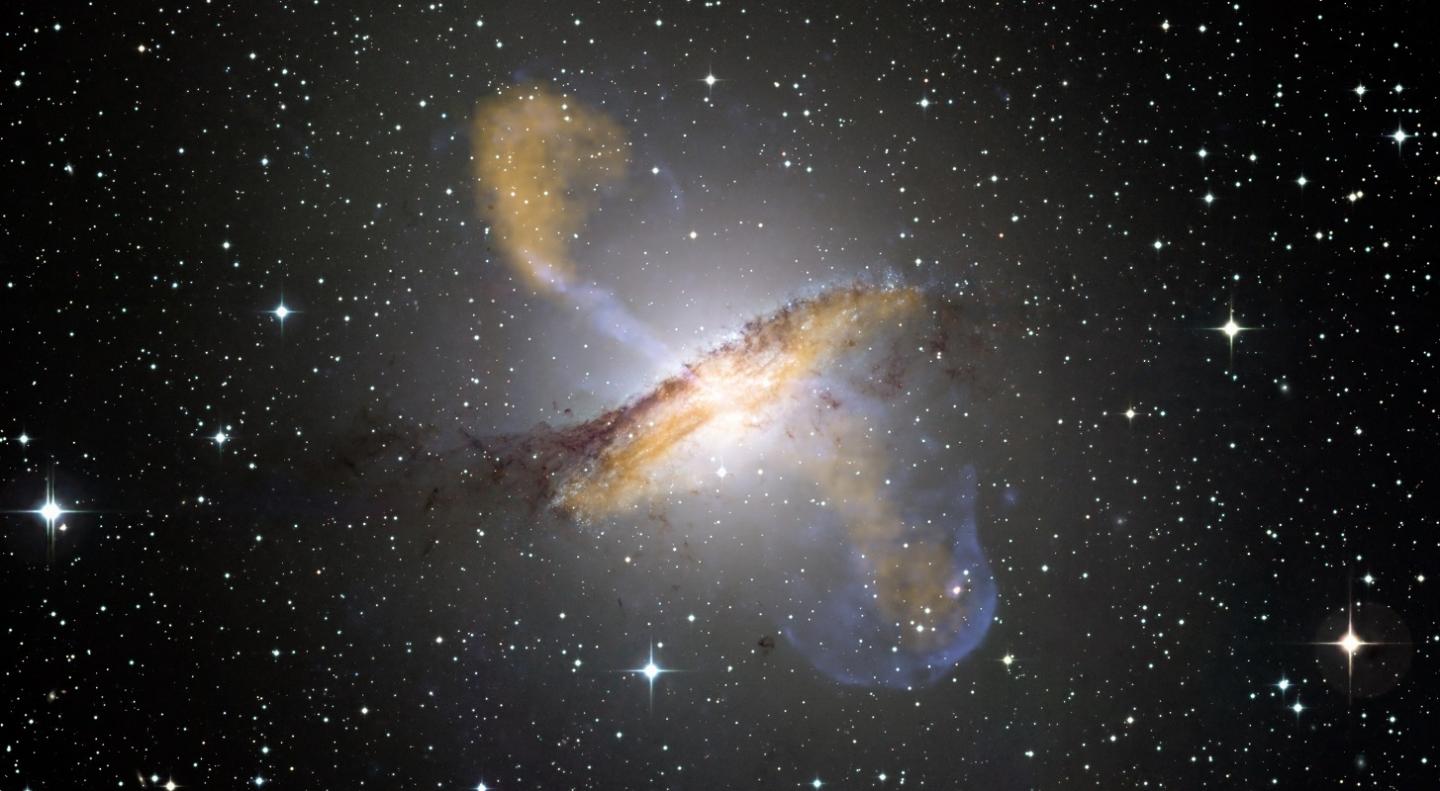 
One theoretical model treats dark matter as being made up of ultralight particles. This offers an explanation for numerous astronomical observations. However, such particles would be so light that they would interact very weakly with other matter and light, making them exceedingly hard to study. It is almost impossible to spot a particle of this kind in a lab, so researchers turn to astronomical observations.

"We are talking about dark matter particles that are 28 orders of magnitude lighter than the electron. This notion is critically important for the model that we decided to test. The gravitational interaction is what betrays the presence of dark matter. If we explain all the observed dark matter mass in terms of ultralight particles, that would mean there is a tremendous number of them. But with particles as light as these, the question arises: How do we protect them from acquiring effective mass due to quantum corrections? Calculations show that one possible answer would be that these particles interact weakly with photons -- that is, with electromagnetic radiation. This offers a much easier way to study them: by observing electromagnetic radiation in space," said Sergey Troitsky, a co-author of the paper and chief researcher at the Institute for Nuclear Research of the Russian Academy of Sciences.

When the number of particles is very high, instead of individual particles, you can treat them as a field of certain density permeating the universe. This field coherently oscillates over domains that are on the order of 100 parsecs in size, or about 325 light years. What determines the oscillation period is the mass of the particles. If the model considered by the authors is correct, this period should be about one year. When polarized radiation passes through such a field, the plane of radiation polarization oscillates with the same period. If periodic changes like this do in fact occur, astronomical observations can reveal them. And the length of the period -- one terrestrial year -- is very convenient, because many astronomical objects are observed over several years, which is enough for the changes in polarization to manifest themselves.

The authors of the paper decided to use the data from Earth-based radio telescopes, because they return to the same astronomical objects many times during a cycle of observations. Such telescopes can observe remote active galactic nuclei -- regions of superheated plasma close to the centers of galaxies. These regions emit highly polarized radiation. By observing them, one can track the change in polarization angle over several years.

"At first it seemed that the signals of individual astronomical objects were exhibiting sinusoidal oscillations. But the problem was that the sine period has to be determined by the dark matter particle mass, which means it must be the same for every object. There were 30 objects in our sample. And it may be that some of them oscillated due to their own internal physics, but anyway, the periods were never the same," Troitsky goes on. "This means that the interaction of our ultralight particles with radiation may well be constrained. We are not saying such particles do not exist, but we have demonstrated that they don't interact with photons, putting a constraint on the available models describing the composition of dark matter."

"Just imagine how exciting that was! You spend years studying quasars, when one day theoretical physicists turn up, and the results of our high-precision and high angular resolution polarization measurements are suddenly useful for understanding the nature of dark matter," enthusiastically adds Yuri Kovalev, a co-author of the study and laboratory director at the Moscow Institute of Physics and Technology and Lebedev Physical Institute of the Russian Academy of Sciences.

In the future, the team plans to search for manifestations of hypothesized heavier dark matter particles proposed by other theoretical models. This will require working in different spectral ranges and using other observation techniques. According to Troitsky, the constraints on alternative models are more stringent.

"Right now, the whole world is engaged in the search for dark matter particles. This is one of the great mysteries of particle physics. As of today, no model is accepted as favored, better-developed, or more plausible with regard to the available experimental data. We have to test them all. Inconveniently, dark matter is "dark" in the sense that it hardly interacts with anything, particularly with light. Apparently, in some scenarios it could have a slight effect on light waves passing through. But other scenarios predict no interactions at all between our world and dark matter, other than those mediated by gravity. This would make its particles very hard to find," concludes Troitsky.

The study reported in this story was supported by the Russian Science Foundation, grant No. 18-12-00258.

The research team co-authoring the paper includes scientists from the Institute for Nuclear Research and Lebedev Physical Institute of the Russian Academy of Sciences, the Moscow Institute of Physics and Technology, the Crimean Astrophysical Observatory, Purdue University (U.S.), and Aalto University (Finland).