According to the U.S. Centers for Disease Control and Prevention, about half of all Americans will have periodontal disease at some point in their lives. Characterized by inflamed gums and bone loss around teeth, the condition can cause bad breath, toothache, tender gums and, in severe cases, tooth loss. Now, in ACS Nano, researchers report development of a membrane that helps periodontal tissue regenerate when implanted into the gums of rats. 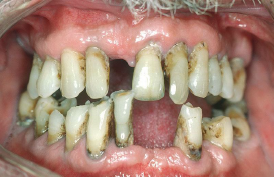 To regrow lost gum tissue and bone, scientists have tried implanting pieces of polymers that form a protected niche near the root of a tooth, recruiting nearby stem cells and helping them differentiate into new gum and bone cells. However, a second surgery is usually required to remove the polymeric membrane, which can get in the way of the healing process. Although researchers have developed biodegradable membranes, these materials don't tend to work as well for re-growing periodontal tissue. Alireza Moshaverinia, Paul Weiss and colleagues wanted to develop a membrane that would enhance periodontal tissue regeneration and then be absorbed by the body when healing was complete.

The researchers made nanofibrous membranes of poly(ε-caprolactone), a biocompatible polymer already approved for medical applications. They then coated the membrane with polydopamine (PDA), a synthetic polymer that mimics the sticky protein that mussels use to attach to wet surfaces. In the lab, dental-derived stem cells adhered to the membrane and differentiated. The PDA coating also attracted calcium and phosphate ions, leading to early bone mineralization. When the researchers implanted the membranes into the gums of rats with periodontal defects, bone at the defect sites regenerated to normal levels within eight weeks. By this time, the membranes had degraded and were absorbed by the rats. Now, the researchers are working on adding other components to the membrane that aid healing and prevent infection.

The authors acknowledge funding from the National Institute of Dental and Craniofacial Research and the University of California, Los Angeles.