Astronomers found a pulsar hurtling through space at nearly 2.5 million miles an hour — so fast it could travel the distance between Earth and the Moon in just 6 minutes. The discovery was made using NASA’s Fermi Gamma-ray Space Telescope and the National Science Foundation's Karl G. Jansky Very Large Array(VLA).

Pulsars are superdense, rapidly spinning neutron stars left behind when a massive star explodes. This one, dubbed PSR J0002+6216 (J0002 for short), sports a radio-emitting tail pointing directly toward the expanding debris of a recent supernova explosion.

“Thanks to its narrow dart-like tail and a fortuitous viewing angle, we can trace this pulsar straight back to its birthplace,” said Frank Schinzel, a scientist at the National Radio Astronomy Observatory (NRAO) in Socorro, New Mexico. “Further study of this object will help us better understand how these explosions are able to ‘kick’ neutron stars to such high speed.”

New radio observations combined with 10 years of data from NASA’s Fermi Gamma-ray Space Telescope have revealed a runaway pulsar that escaped the blast wave of the supernova that formed it.

Schinzel, together with his colleagues Matthew Kerr at the U.S. Naval Research Laboratory in Washington, and NRAO scientists Dale Frail, Urvashi Rau and Sanjay Bhatnagar presented the discovery at the High Energy Astrophysics Division meeting of the American Astronomical Society in Monterey, California. A paper describing the team’s results has been submitted for publication in a future edition of The Astrophysical Journal Letters.

Pulsar J0002 was discovered in 2017 by a citizen-science project called Einstein@Home, which uses time on the computers of volunteers to process Fermi gamma-ray data. Thanks to computer processing time collectively exceeding 10,000 years, the project has identified 23 gamma-ray pulsars to date.

Located about 6,500 light-years away in the constellation Cassiopeia, J0002 spins 8.7 times a second, producing a pulse of gamma rays with each rotation.

The CTB 1 supernova remnant resembles a ghostly bubble in this image, which combines new 1.5 gigahertz observations from the Very Large Array (VLA) radio telescope (orange, near center) with older observations from the Dominion Radio Astrophysical Observatory’s Canadian Galactic Plane Survey (1.42 gigahertz, magenta and yellow; 408 megahertz, green) and infrared data (blue). The VLA data clearly reveal the straight, glowing trail from pulsar J0002+6216 and the curved rim of the remnant’s shell. CTB 1 is about half a degree across, the apparent size of a full Moon. 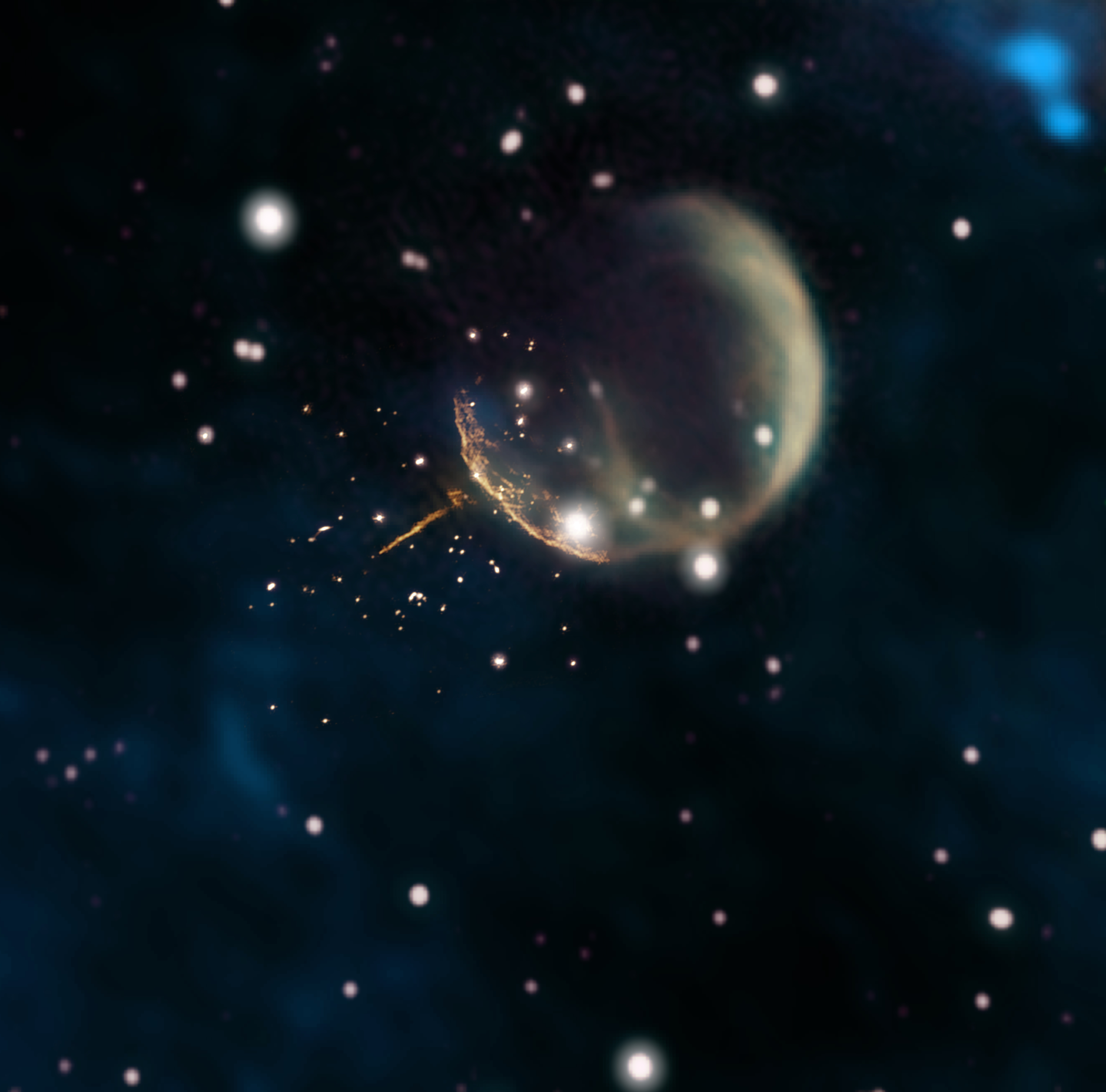 
The pulsar lies about 53 light-years from the center of a supernova remnant called CTB 1. Its rapid motion through interstellar gas results in shock waves that produce the tail of magnetic energy and accelerated particles detected at radio wavelengths using the VLA. The tail extends 13 light-years and clearly points back to the center of CTB 1.

Using Fermi data and a technique called pulsar timing, the team was able to measure how quickly and in what direction the pulsar is moving across our line of sight.

“The longer the data set, the more powerful the pulsar timing technique is,” said Kerr. “Fermi’s lovely 10-year data set is essentially what made this measurement possible.”

The result supports the idea that the pulsar was kicked into high speed by the supernova responsible for CTB 1, which occurred about 10,000 years ago.

J0002 is speeding through space five times faster than the average pulsar, and faster than 99 percent of those with measured speeds. It will eventually escape our galaxy.

At first, the supernova’s expanding debris would have moved outward faster than J0002, but over thousands of years the shell’s interaction with interstellar gas produced a drag that gradually slowed this motion. Meanwhile, the pulsar, behaving more like a cannonball, steadily raced through the remnant, escaping it about 5,000 years after the explosion.

Exactly how the pulsar was accelerated to such high speed during the supernova explosion remains unclear, and further study of J0002 will help shed light on the process. One possible mechanism involves instabilities in the collapsing star forming a region of dense, slow-moving matter that survives long enough to serve as a “gravitational tugboat,” accelerating the nascent neutron star toward it.

The Fermi Gamma-ray Space Telescope is an astrophysics and particle physics partnership managed by NASA's Goddard Space Flight Center in Greenbelt, Maryland. Fermi was developed in collaboration with the U.S. Department of Energy, with important contributions from academic institutions and partners in France, Germany, Italy, Japan, Sweden and the United States.