In a New Quantum Simulator, Light Behaves Like a Magnet

Physicists at EPFL propose a new “quantum simulator”: a laser-based device that can be used to study a wide range of quantum systems. Studying it, the researchers have found that photons can behave like magnetic dipoles at temperatures close to absolute zero, following the laws of quantum mechanics. The simple simulator can be used to better understand the properties of complex materials under such extreme conditions.

When subject to the laws of quantum mechanics, systems made of many interacting particles can display behaviour so complex that its quantitative description defies the capabilities of the most powerful computers in the world. In 1981, the visionary physicist Richard Feynman argued we can simulate such complex behavior using an artificial apparatus governed by the very same quantum laws – what has come to be known as a “quantum simulator”. 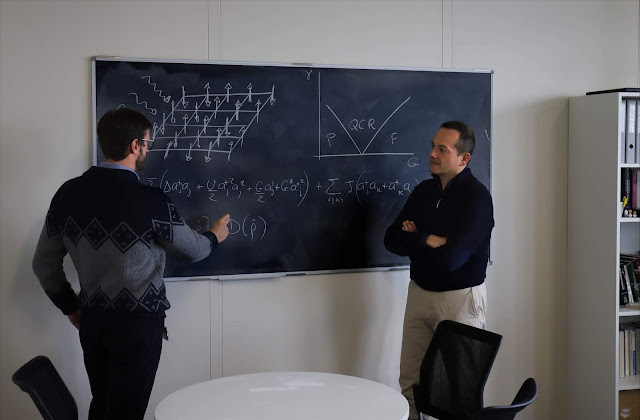 One example of a complex quantum system is that of magnets placed at really low temperatures. Close to absolute zero (-273.15 degrees Celsius), magnetic materials may undergo what is known as a “quantum phase transition”. Like a conventional phase transition (e.g. ice melting into water, or water evaporating into steam), the system still switches between two states, except that close to the transition point the system manifests quantum entanglement – the most profound feature predicted by quantum mechanics. Studying this phenomenon in real materials is an astoundingly challenging task for experimental physicists.

But physicists led by Vincenzo Savona at EPFL have now come up with a quantum simulator that promises to solve the problem. “The simulator is a simple photonic device that can easily be built and run with current experimental techniques,” says Riccardo Rota, the postdoc at Savona’s lab who led the study. “But more importantly, it can simulate the complex behavior of real, interacting magnets at very low temperatures.”

The simulator may be built using superconducting circuits – the same technological platform used in modern quantum computers. The circuits are coupled to laser fields in such a way that it causes an effective interaction among light particles (photons). “When we studied the simulator, we found that the photons behaved in the same way as magnetic dipoles across the quantum phase transition in real materials,” says Rota. In short, we can now use photons to run a virtual experiment on quantum magnets instead of having to set up the experiment itself.

Understandably, Rota is excited: “Our simulator can be applied to a broad class of quantum systems, allowing physicists to study several complex quantum phenomena. It is a truly remarkable advance in the development of quantum technologies.”