Off the coast of Washington, columns of bubbles rise from the seafloor, as if evidence of a sleeping dragon lying below. But these bubbles are methane that is squeezed out of sediment and rises up through the water. The locations where they emerge provide important clues to what will happen during a major offshore earthquake.

The study, from the University of Washington and Oregon State University, was recently published in the Journal of Geophysical Research: Solid Earth.

The first large-scale analysis of these gas emissions along Washington’s coast finds more than 1,700 bubble plumes, primarily clustered in a north-south band about 30 miles (50 kilometers) from the coast. Analysis of the underlying geology suggests why the bubbles emerge here: The gas and fluid rise through faults generated by the motion of geologic plates that produce major offshore earthquakes in the Pacific Northwest.

“We found the first methane vents on the Washington margin in 2009, and we thought we were lucky to find them, but since then, the number has just grown exponentially,” said lead author Paul Johnson, a UW professor of oceanography.

“These vents are a little ephemeral,” Johnson added. “Sometimes they turn off-and-on with the tides, and they can move around a little bit on the seafloor. But they tend to occur in clusters within a radius of about three football fields. Sometimes you’ll go out there and you’ll see one active vent and you’ll go back to the same location and it’s gone. They’re not reliable, like the geysers at Yellowstone.”

The authors analyzed data from multiple research cruises over the past decade that use modern sonar technology to map the seafloor and also create sonar images of gas bubbles within the overlying water. Their new results show more than 1,778 methane bubble plumes issuing from the waters off Washington State, grouped into 491 clusters.

“If you were able to walk on the seafloor from Vancouver Island to the Columbia River, you would never be out of sight of a bubble plume,” Johnson said.

Red stars show locations of methane bubble plumes off Washington’s coast. The light gray is the shallow continental shelf, less than 160 meters (175 yards) deep. The blue is the deeper margin and abyssal plain, deeper than 2.8 kilometers 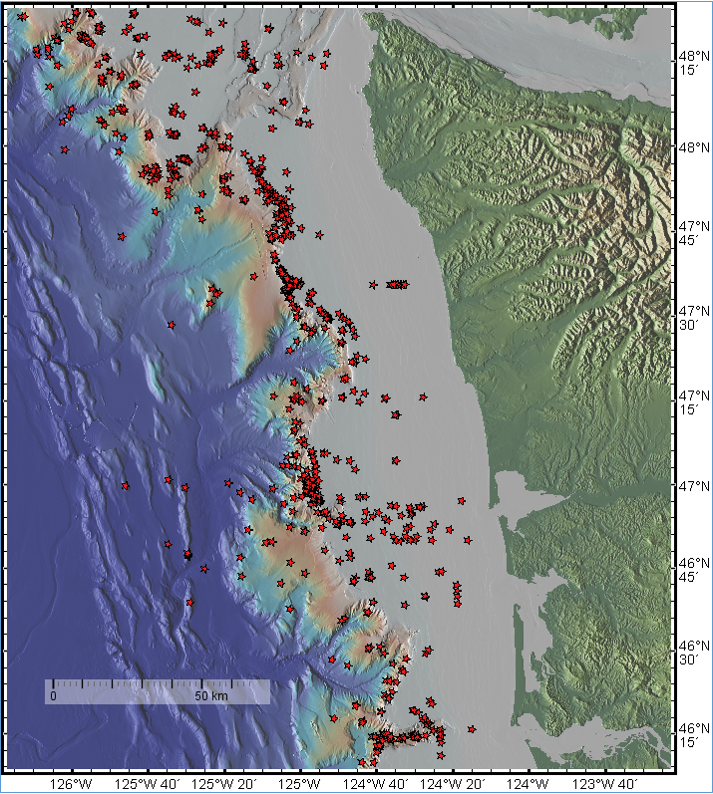 The sediments off the Washington coast are formed as the Juan de Fuca oceanic plate plunges under the North American continental plate, scraping material off the ocean crust. These sediments are then heated, deformed and compressed against the rigid North American plate. The compression forces out both fluid and methane gas, which emerges as bubble streams from the seafloor.

“Although there are some methane plumes from all depths on the margin, the vast majority of the newly observed methane plume sites are located at the seaward side of the continental shelf, at about 160 meters water depth,” Johnson said.

A previous study from the UW had suggested that warming seawater might be releasing frozen methane in this region, but further analysis showed the methane bubbles off the Pacific Northwest coast arise from sites that have been present for hundreds of years, and are not related to global warming, Johnson said.

Instead, these gas emissions are a long-lived natural feature, and their prevalence contributes to the continental shelf area being such productive fishing grounds. Methane from beneath the seafloor provides food for bacteria which then produce large quantities of bacterial film. This biological material then feeds an entire ecological chain of life that enhances fish populations in those waters.

“If you look online at where the satellite transponders show where the fishing fleet is, you can see clusters of fishing boats around these methane plume hotspots,” Johnson said.

To understand why the methane bubbles occur here, the authors used archive geologic surveys conducted by the oil and gas companies in the 1970s and 1980s. The surveys, now publicly accessible, show fault zones in the sediment where the gas and fluid migrate upward until emerging from the seafloor.

“Seismic surveys over the areas with methane emission indicate that the continental shelf edge gets thrust westward during a large megathrust, or magnitude-9, earthquake,” Johnson said. “Faults at this tectonic boundary provide the permeable pathways for methane gas and warm fluid to escape from deep within the sediments.”

The Washington coast is geologically complex. The bubbles emerge from a region off the coast above where the Juan de Fuca ocean plate plunges beneath the North American continental plate. 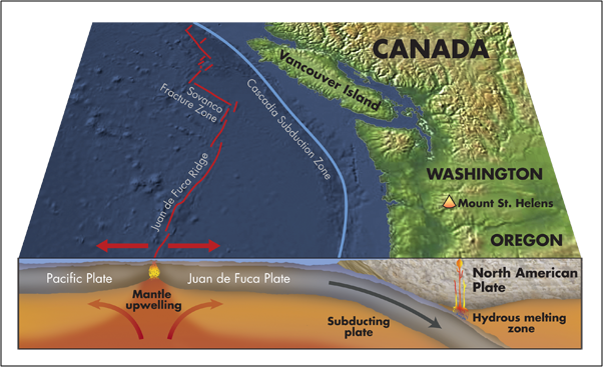 The location of these faults could potentially provide new understanding of the earthquake hazard from the Cascadia Subduction Zone, which last ruptured more than 300 years ago. If the seafloor movement during a subduction-zone earthquake occurs closer to shore, and a major component of this motion occurs within the shallower water, this would generate a smaller tsunami than if the seafloor motion were entirely in deep water.

“If our hypothesis turns out to be true, then that has major implications for how this subduction zone works,” Johnson said.

Contacts and sources:
Hannah Hickey
University of Washington
on March 22, 2019