How Do New Species Arise in the Sea: Fundamental Question in Evolutionary Biology

How can a new species form if animals live together and can interbreed? A team from the Smithsonian Tropical Research Institute in Panama and the GEOMAR Helmholtz Centre for Ocean Research in Kiel, Germany, studied Caribbean reef fishes to find out. Their discovery that natural selection couples the evolution of genes for vision and color pattern is published in the journal Nature Ecology and Evolution.

For a new species to evolve, two things are essential: a characteristic such as a color, unique to one species and a mating preference for this color. For example, individuals from a blue fish species prefer blue mates and individuals from a red species prefer red mates. If the two species interbreed, the process of sexual recombination is expected to destroy the coupling between color and mate preferences resulting in red individuals with a preference for blue mates and vice versa. This is one of the reasons why it has been thought for a long time that new species can only evolve in absolute isolation, without interbreeding.

However, the dynamics of this process depend on the exact number and location of genes underlying species characteristics and mate preferences, the strength of natural selection acting on these genes and the amount of interbreeding between species. In a new study, Oscar Puebla, professor at GEOMAR and research associate at the Smithsonian Tropical Research Institute, and colleagues found that natural selection can couple the evolution of genes for color pattern and mate preferences when species still interbreed.

Two yellowbelly hamlets (Hypoplectrus aberrans) spawning in Dominica. Note that the tiny eggs are visibile in front of the head of the upper fish. 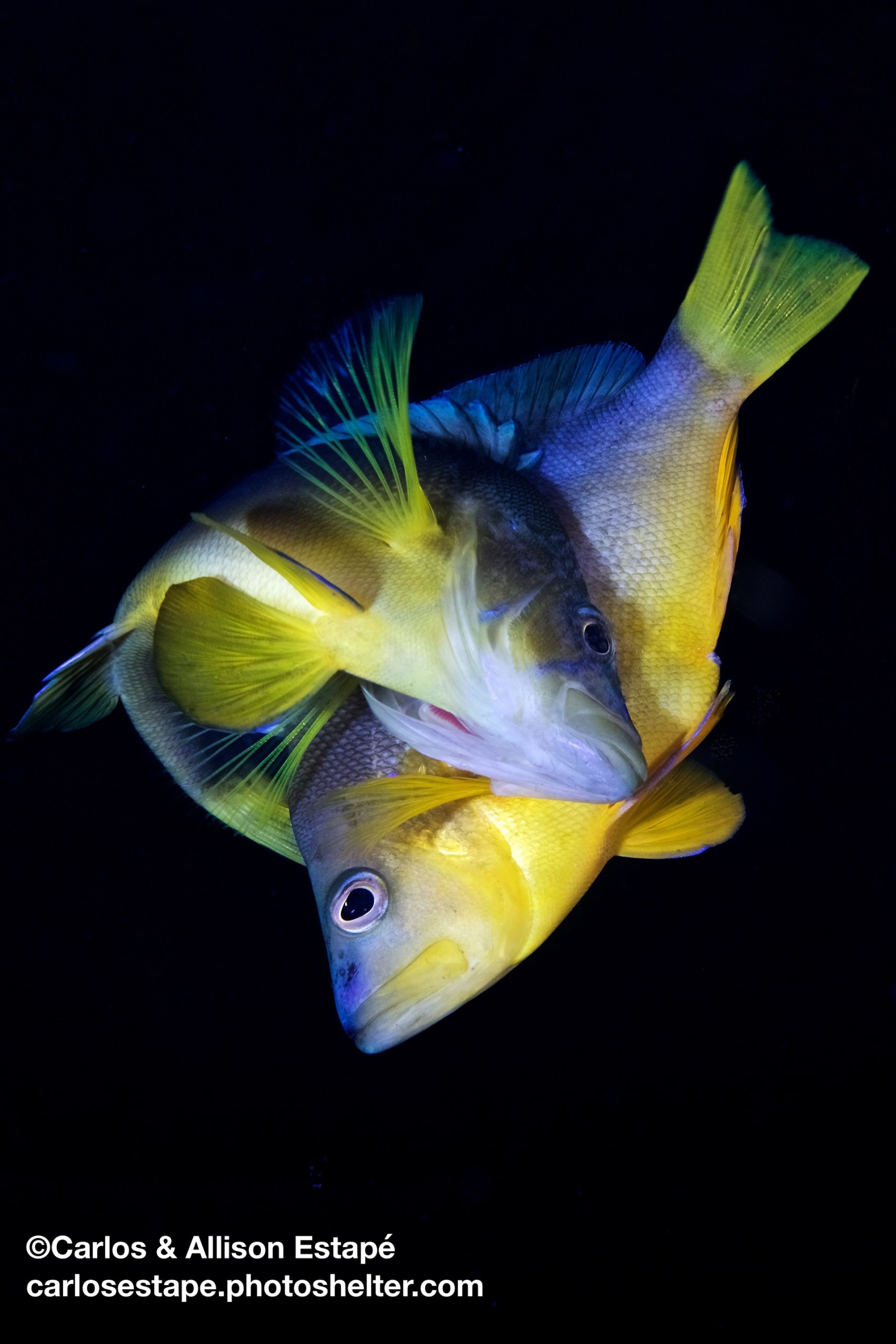 
“To address this question, our first challenge was to identify an animal group in which species still interbreed and in which the mechanisms underlying reproductive isolation are well understood,” Puebla said.

The hamlets, a group of closely related fish species found on reefs across the Caribbean, are genetically very similar. The main difference between species is color pattern, and it is mate preference for different color patterns that keeps the species separate.

A second difficulty consists in identifying the genes that underlie species differences and mate preferences. The authors of this study sequenced the entire genome of the hamlets and then asked how the genome differed in each of 110 individuals from three species found together on Caribbean reefs.

“This powerful data set allowed us to identify four narrow regions of the genome that are highly and consistently differentiated among species against a backdrop of almost no genetic differentiation in the rest of the genome,” said co-author Kosmas Hench, doctoral student at GEOMAR. These four intervals include genes involved with vision and color pattern.

The data also show that vision and color pattern genes remain coupled despite the fact that they are located on three different chromosomes and that species still interbreed. Such a coupling was previously reported when sets of genes are very close to each other on a chromosome, in which case they are protected from sexual recombination, but not when they are on different chromosomes. By capturing the very earliest stages of speciation in hamlets, the team shows how selection can contribute to the creation of new species.

“A lot of closely related coral reef fishes differ in little else but color and pattern,” said Owen McMillan, co-author and academic dean at STRI. “I fully expect that the discoveries we have made in hamlets will apply to other forms of life and may ultimately explain the remarkable diversity of fishes on coral reefs around the world.”