More than 100 years ago, the German meteorologist and avid balloonist Alfred Wegener remarked in a letter to his future wife Elsa Köppen on an odd pattern he noticed on world maps.

"Doesn't the east coast of South America fit exactly against the west coast of Africa, as if they had once been joined?" he reportedly wrote in December 1910. "This is an idea I'll have to pursue."

Wegener's insight eventually led to the understanding, many decades and much debate later, that the Earth is made of plates that fit together like the cracked shell of an egg -- except that the shells, or plates, move around on a more plastic layer called the asthenosphere.

The areas where the plates move apart, like down the middle of the Atlantic Ocean, are where new crust forms. Here, molten rock rises up, forming a ridge between the plates. But because these mid-ocean ridges are in deep water and remote, they are notoriously difficult to study and are poorly understood.


An illustration of what it's like in a black smoker field.


Now, a team of Norwegian scientists has used advanced electromagnetic technology to create the first-ever images of a specific type of mid-ocean ridge, as a way to learn more about the dynamic forces in the Earth's mantle underneath. Their results have just been published in Nature.

Deep imaging of the unknown

Ståle Emil Johansen, the first author of the study and a professor at the Norwegian University of Science and Technology (NTNU)'s Department of Geoscience and Petroleum, says the researchers decided to study a specific type of mid-ocean ridge called an ultraslow-spreading ridge.

As the name suggests, this is where plates are moving apart extremely slowly, less than 20 millimetres per year. In contrast, velocities measured at different parts of the Pacific plate show movements of more than 150 mm per year.

More than 30 per cent of the mid-ocean ridges in the world are ultraslow-spreading ridges, he said. But for all of that, geologists know very little about them.

"No one has ever imaged these kinds of ridges before using modern electromagnetic methods, and this is deeper than we have ever been able to image before," he said. "The deep structures are simply unknown."

Loki's Castle under the sea

The ultraslow-spreading ridge that the team studied is called Mohns Ridge. It lies southwest of Svalbard and east of the coast of Greenland.

Here, the oceanic crust is very thin and there's a prominent black smoker field in an area called Loki's Castle. Black smokers are vents on the seafloor that release a steady stream of extremely hot, mineral-rich seawater. Black smokers are also a prime location for deposition of deep-sea minerals.

Johansen said the project was focused on developing fundamental information about the kinds of forces that drive upwelling of partly melted mantle rocks along the ridges.

"It's basic research," he said, "although it also provides groundbreaking insight into the formation of black smokers and subsea metal deposits."

The researchers were able to use a special kind of electromagnetic imaging technique called controlled-source electromagnetic surveying technology (CSEM). The technology requires a ship to place antennas on the ocean floor in a grid, after which the ship tows a source of electromagnetic energy over the grid on a long cable and collects information about the energy that returns back from the subsurface.

The seafloor antennas are also able to record a second type of electromagnetic signal, a naturally occurring electromagnetic background signal. The technique that uses this energy is called magnetotellurics (MT). "Charged particles from the sun create electrical currents when they hit the Earth's atmosphere. You can also see this energy when you see the Northern Lights," he said.

Johansen said it's fascinating that this natural signal, which is very weak, can even be detected at all, since it makes a long journey from the ionosphere deep into the mantle and back again to the sea floor. But it works, especially when combined with CSEM technology.

"What we have done for the first time is to combine these two signals into one, to create quite spectacular images of these deep structures, " he said.

In this case, however, the researchers wanted to figure what was happening below an ultraslow-spreading ridge. Were the structures under the ridge being formed passively by partly melting rocks "bubbling" up when the North American and Eurasian plates moved apart?

The major tectonic plates and their boundaries. Johansen and his colleagues collected data from the Mohns Ridge, which lies south of the Svalbard Archipelago and east of Greenland. 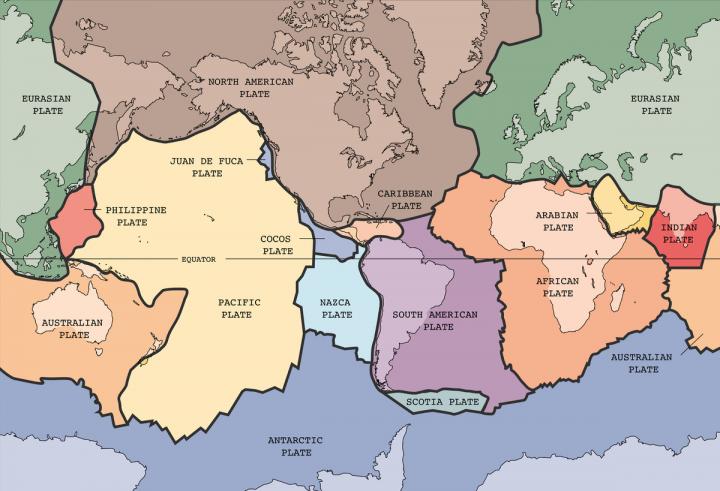 The information they collected -- weak differences in voltage that result from different electrical conductivities in rocks under the ocean floor -- can be translated into images that show the subsurface distribution of different rock types as well as melts and fluids.

In one image, the researchers were able to detect the plumbing system for deeply circulating seawater that forms mineral deposits at Loki's Castle.

Another series of images they made shows what's happening where the two plates are spreading apart, which is what the scientists were most curious about.

The technology worked so well they were able to create images down to 120 km below the seafloor. Their findings, they realized, could help explain the mapped structures beneath the ridge and also to understand fundamental processes that create ultraslow ridges.

Understanding how new crust is formed at mid-ocean ridges

Even though Wegener's plate tectonic theory has been accepted for the last six decades, and the general principles behind plate movement are generally understood, there's still much more to learn -- especially when it comes to mid-ocean ridges.

When two plates meet the side of one plate gets pushed, or subducted, under the other plate. This is what is happening in the Pacific, where the eastern side of the Pacific plate is sliding under the South-American continent.

There's generally lots of tectonic activity, such as earthquakes or volcanoes, at plate boundaries. It tends to be more visible when the edge of the plate is near the continental edge, as in western North America. Think California.

In this case, however, the researchers wanted to figure what was happening with the ultraslow-spreading ridge. Were the structures below the ridge being formed passively by partly melting rocks "bubbling" up when the North American and Eurasian plates moved apart?

Or is there a push from below, where overpressure in the mantle creates a dynamic system that actively pushes partly melted rock up from the deep?

"Normally when we think of plates moving apart, they create a space between them and magma rises up. So if you make an image of this, the normal thing to think is that it looks nice and symmetric," he said.

This image shows a cross section of the region surveyed for the study, with the ultraslow-spreading ridge at the center. Arrows in the red areas at the top of the section show circulation patterns of seawater through the oceanic crust, which helps enrich the water with metals before it emerges from the ridge in a black smoker.

This matters because geologists have traditionally believed that asymmetric thickness along mid-ocean ridges means there must be a dynamic system and that overpressure pushes magma up from the deep mantle.

That could mean no push from below at the Mohns Ridge, but that the movements of the plates themselves are making the patterns the researchers see, he said. It's also another piece of information that will help researchers to better understand how the Earth's tectonic plates behave.

Johansen came to academia after a career working at Equinor, the Norwegian energy company, and with EMGS, the company that has developed the electromagnetic imaging technique the researchers used in their findings.

"People ask me why I do this," he said, he said of his shift to academia. "It's because of the excitement of discovery that is a part of basic research."