Unseen Plastic Pollution from the Laundry

While the polyester leisure suit was a 1970s mistake, polyester and other synthetic fibers like nylon are still around and are a major contributor to the microplastics load in the environment, according to a Penn State materials scientist, who suggests switching to biosynthetic fibers to solve this problem.

"These materials, during production, processing and after use, break down into and release microfibers that can now be found in everything and everyone," said Melik Demirel, Lloyd and Dorothy Foehr Huck Endowed Chair in Biomimetic Materials.

Lint captured in a dryer filter consists of tiny fibers that are shed from the fabric. Modern, front-loading washers do not have lint filters. 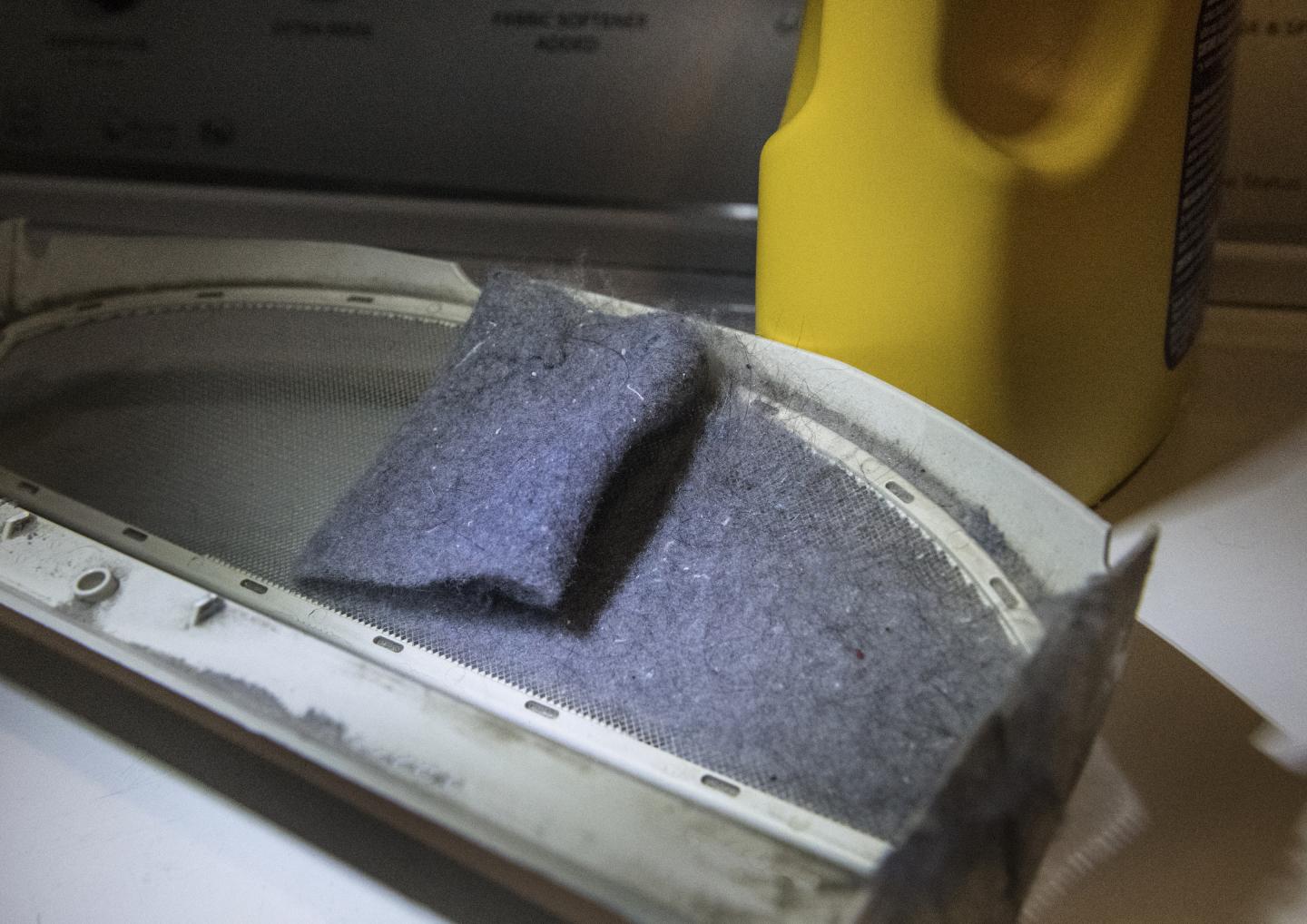 Islands of floating plastic trash in the oceans are a visible problem, but the pollution produced by textiles is invisible and ubiquitous. In the oceans, these microscopic plastic pieces become incorporated into plants and animals. Harvested fish carry these particles to market and, when people eat them, they consume microplastic particles as well.

Demirel suggested four possible approaches to solving this problem, today (Feb. 16) at the 2019 annual meeting of the American Association for the Advancement of Science in Washington, D.C. The first is to minimize the use of synthetic fibers and switch back to natural fibers such as wool, cotton, silk and linen. However, synthetic fibers are less expensive and natural fibers have other environmental costs, such as water and land-use issues.

Because much of the microfiber load that ends up in water sources comes from laundering, he suggests aftermarket filters for washing-machine outflow hoses. Clothes dryers have filters that catch lint - also microfiber waste - but current, front-loading washing machines usually do not.

"Capturing the microplastics at the source is the best filtering option," said Demirel.

He also notes that bacteria that consume plastics do exist, but are currently at the academic research phase, which takes some time to gain industrial momentum. If bacteria were used on a large scale, they could aid in biodegradation of the fibers or break the fibers down to be reused.

This is a close up of the fibers shed from fabric in a clothes dryer. These are the fibers that go down the drain and into the global water system. 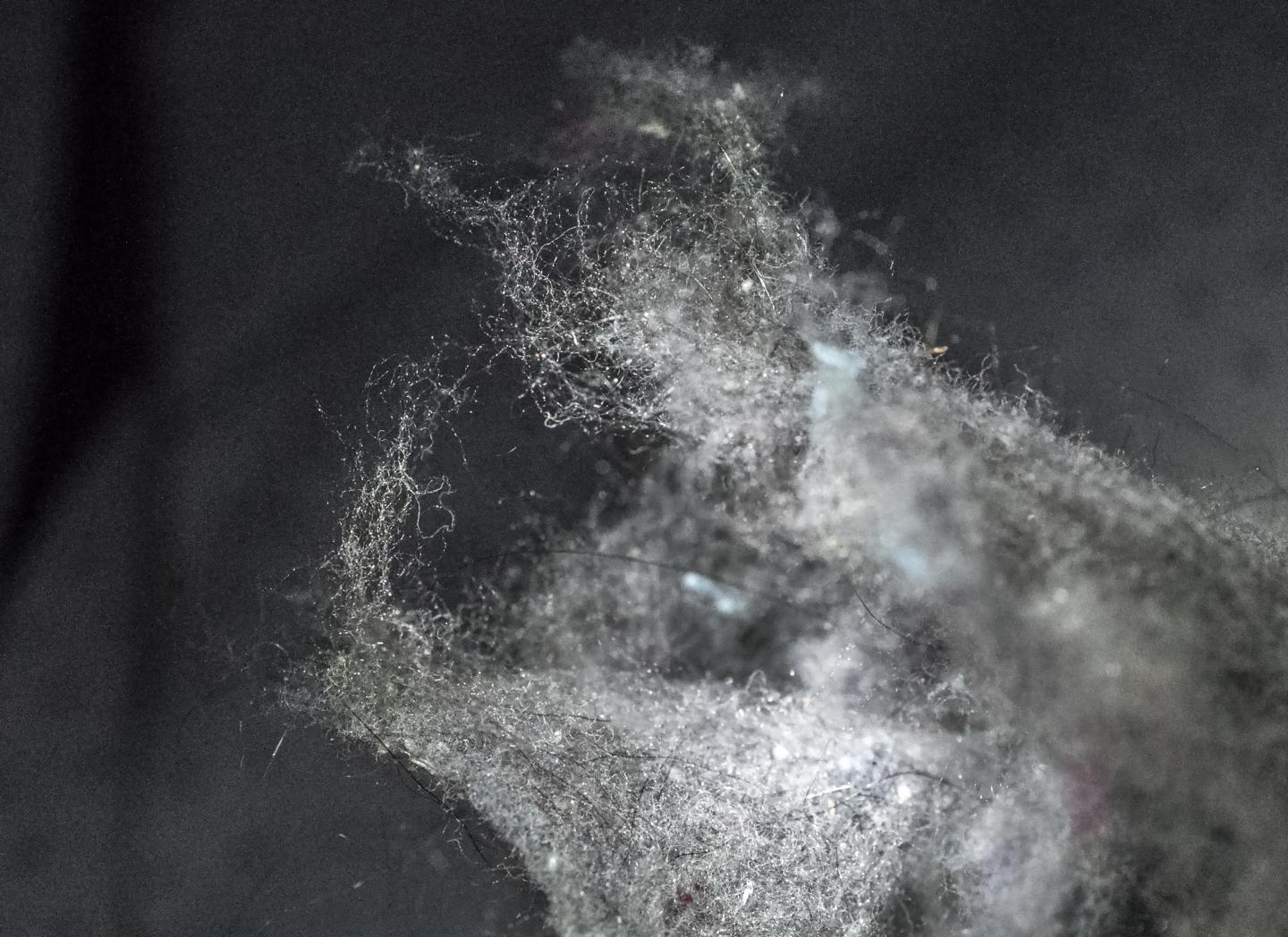 While these three options are possible, they do not solve the problem of the tons of synthetic fibers currently used in clothing around the world. Biosynthetic fibers, a fourth option, are both recyclable and biodegradable and could directly substitute for the synthetic fibers. They could also be blended with natural fibers to provide the durability of synthetic fibers but allow the blends to be recycled.

Derived from natural proteins, biosynthetic fibers also can be manipulated to have desirable characteristics. Demirel, who developed a biosynthetic fiber composed of proteins similar to silk but inspired by those found in squid ring teeth, suggests that by altering the number of tandem repeats in the sequencing of the proteins, the polymers can be altered to meet a variety of properties.

For example, material manufactured from biosynthetic squid ring-teeth proteins, called Squitex, is self-healing. Broken fibers or sections will reattach with water and a little pressure and enhance the mechanical properties of recycled cotton as a blend. Also, because the fibers are organic, they are completely biodegradable as well.

The Army Research Office, Air Force Office of Scientific Research and the Office of Naval Research supported the squid-inspired biosynthetic material. Demirel is the co-founder of a company planning to commercialize Squitex.