The Milky Way Is Warped and Twisted

Our Milky Way galaxy's disk of stars is anything but stable and flat. Instead, it becomes increasingly 'warped' and twisted far away from the Milky Way's center, according to astronomers from National Astronomical Observatories of Chinese Academy of Sciences (NAOC).

Astronomers from Macquarie University and the Chinese Academy of Sciences have used 1339 ‘standard’ stars to map the real shape of our home galaxy in a paper published in Nature Astronomy today.

They found the Milky Way’s disc of stars becomes increasingly ‘warped’ and twisted the further away the stars are from the galaxy’s centre.

A slightly exaggerated impression of the real shape of our warped and twisted Milky Way.

“We usually think of spiral galaxies as being quite flat, like Andromeda which you can easily see through a telescope,” says Professor Richard de Grijs, a co-author and astronomer from Macquarie University in Sydney, Australia.

Trying to determine the real shape of our galaxy is like standing in a Sydney garden and trying to determine the shape of Australia. But, for the past 50 years there have been indications that the hydrogen clouds in the Milky Way are warped. The new map shows that the warped Milky Way disc also contains young stars. It confirms that the warped spiral pattern is caused by torque from the spinning of the Milky Way’s massive inner disc of stars.

“It is notoriously difficult to determine distances from the Sun to parts of the Milky Way’s outer gas disc without having a clear idea of what that disc actually looks like,” says Xiaodian Chen, lead author, from the Chinese Academy of Sciences in Beijing.

“This research provides a crucial updated map for studies of our galaxy’s stellar motions and the origins of the Milky Way’s disc,” says Licai Deng, senior researcher at the Chinese Academy of Sciences and co-author on the paper.

“Most of the matter in the Milky Way is dark matter, it’s an intrinsic part of our universe,” says Richard. “But we have absolutely no idea what dark matter is or even where it is. Our research showing the shape of the Milky Way, could help us determine how dark matter is distributed around our galaxy.”

The team built their map using 1339 large pulsating stars each up to 100,000 brighter than our sun. Data on these classical Cepheid stars were provided by the Wide-field Infrared Survey Explorer (WISE).

Astronomers have observed a dozen other galaxies which showed similar progressively twisted spiral patterns in their outer regions. So our Milky Way’s twists are rare but not unique.

From a great distance, our spiral galaxy would look like a thin disc of stars that orbits once every few hundred million years around its central region, where hundreds of billions of stars provide the gravitational ‘glue’ to hold it all together.

Top: 3D distribution of the classical Cepheids in the Milky Way's warped disk. Lower: Precession of the warp's line of nodes with Galactocentric radius. 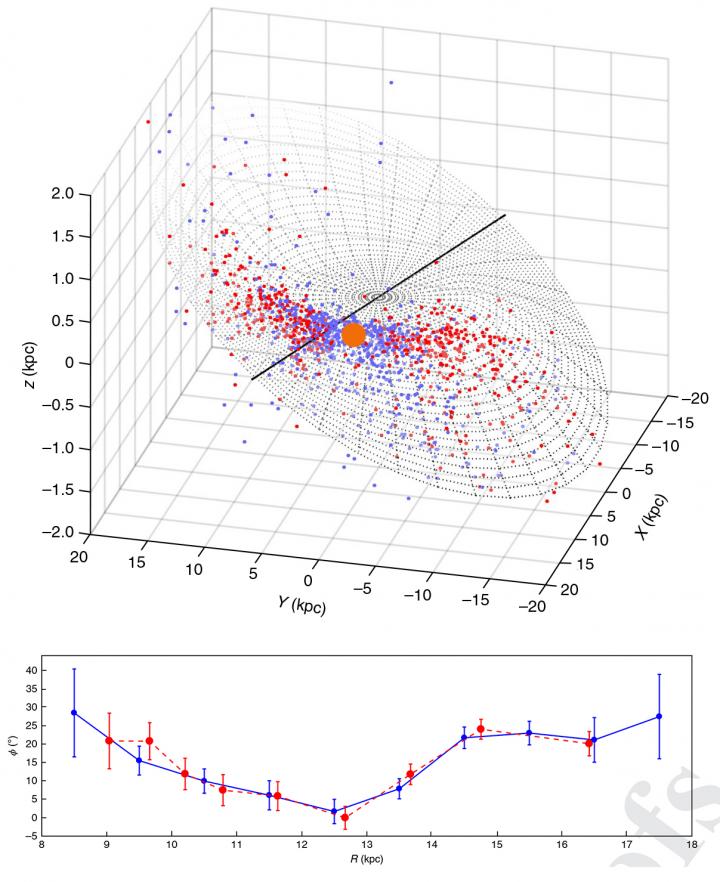 But this pull of gravity is much weaker in the galaxy’s far outer disc. There, the hydrogen atoms making up most of the Milky Way’s gas disc are no longer confined to a thin plane, instead they give the disc an S-like, or warped, appearance.

The researchers were able to determine our galaxy’s twisted appearance after they developed the first accurate three-dimensional picture of the Milky Way out to its far outer regions.

“It is notoriously difficult to determine distances from the Sun to parts of the Milky Way’s outer gas disc without having a clear idea of what that disc actually looks like,” says Xiaodian Chen, a researcher at the Chinese Academy of Sciences in Beijing and lead author of the article.

“However, we recently published a new catalogue of well-behaved variable stars known as classical Cepheids, for which very accurate distances can be determined with an error of only three to five per cent.”

Classical Cepheids are young stars that are some four to 20 times as massive as our Sun and up to 100,000 times as bright.

Such high stellar masses imply that they live fast and die young, burning through their fuel very quickly, sometimes in only a few million years.

They show day- to month-long pulsations, which are observed as changes in their brightness. Combined with a Cepheid’s observed brightness, its pulsation period can be used to obtain a highly accurate distance.

“Somewhat to our surprise, we found that in 3D our collection of 1339 Cepheid stars and the Milky Way’s gas disc follow each other closely. This offers new insights into the formation of our home galaxy,” says Macquarie University’s Professor Richard de Grijs, senior co-author on the paper.

“Perhaps more importantly, in the Milky Way’s outer regions, we found that the S-like stellar disc is warped in a progressively twisted spiral pattern.”

Astronomers have observed a dozen other galaxies which showed similar patterns.

Combining their results with these earlier observations, the researchers concluded that the Milky Way’s warped spiral pattern is most likely caused by torque from the galaxy’s massive inner disc.

“This new morphology provides a crucial updated map for studies of our galaxy’s stellar motions and the origins of the Milky Way’s disc,” says Licai Deng, senior researcher at the Chinese Academy of Sciences and co-author on the paper.