Physicists at McMaster University have for the first time identified a simple mechanism used by potentially deadly bacteria to fend off antibiotics, a discovery which is providing new insights into how germs adapt and behave at a level of detail never seen before.

The findings, published today in the journal Nature Communications Biology, could have implications in the global battle against antibiotic resistance, enabling the design of better, more effective drugs to fight infection.

“There are many, many bacteria out there, and so many antibiotics, but by proposing a basic model that applies to many of them, we can have a much better understanding on how to tackle and predict resistance better,” says Maikel Rheinstädter, a professor in the Department of Physics and Astronomy at McMaster and lead author of the study.

These are researchers Maikel Rheinstädter and Adree Khondker of McMaster University. 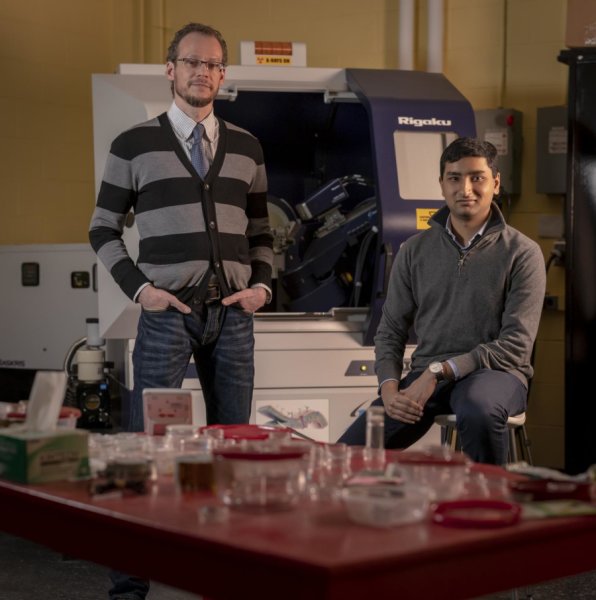 
Researchers examined how the membranes of bacteria interacted with the antibiotic polymyxin B (PmB), which is commonly used to treat urinary tract infections, meningitis, blood and eye infections.

They concentrated on PmB because it was once considered the strongest drug of its kind, a last line of defense for physicians when nothing else worked. That failsafe status came into question in 2016, when Chinese scientists discovered a gene that allowed bacteria to become resistant even to polymyxins.

“We wanted to find out how this bacteria, specifically, was stopping this drug in this particular case,” says Adree Khondker, a health sciences undergraduate student and first author on the study. “If we can understand that, we can design better antibiotics.”

Employing techniques typically used by physicists for materials research, the team used highly specialized equipment to peer deep into the bacterial membrane, capturing images with a resolution so fine they could view individual molecules at approximately 1/1,000,000th the width of a strand of human hair.

“If you take the bacterial cell and add this drug, holes will form in the wall, acting like a hole-puncher, and killing the cell. But there was much debate on how these holes were formed in the first place.” explains Khondker.

When these antibiotics are working properly, researchers know the basic laws of physics apply: because the drug is positively charged it is attracted to the negatively charged bacteria. At the same time, the bacterial membrane is employing a repulsive force as it attempts to repel the drug.

Through imaging and simulations, researchers pinpointed which part of the antibiotic enters the membrane, where it enters and how deeply it penetrates. They simulated these processes on microsecond timescales with high-end gaming computers in their lab.

They determined that when a bacterium has become resistant, its membrane is more rigid and the charge is weaker, making it much less attractive to the drug and harder to penetrate. "For the drug, it's like going from cutting Jello to cutting through rock." Khondker says.

“There has been a lot of speculation about this mechanism,” says Rheinstädter. “But for the first time we can prove the membrane is more rigid and the process is slowed.”

The World Health Organization (WHO) considers the issue of antibacterial resistance a top global threat to public health, threatening our ability to treat common infectious illnesses, resulting in prolonged illness, disability and death. An estimated 70,000 people worldwide die every year from drug-resistant strains of bacterial infections, HIV/AIDS, tuberculosis and malaria.

Experts have warned that by 2050, the annual death toll will soar to 10 million worldwide.

The work was funded by the Canadian Institutes of Health Research (CIHR), the Natural Sciences and Engineering Research Council of Canada (NSERC) and the Canadian Foundation of Innovation (CFI).

Support BeforeitsNews by trying APeX (far superior to colloidal silver) or any of our other great products at www.mitocopper.com

Check out the life changing BeforeitsNews natural health products and sign up to be an Affiliate so you earn on all sales through your links on Beforeitsnews, other websites or social networks!
APeX – Far superior to colloidal silver in destroying viruses, bacteria and other pathogens. See the videos and 50 page report!
Ultimate Curcumin – Most powerful natural pain relief you can buy. Reduce inflammation, depression, arthritis and so much more!
Supreme Fulvic – Nature’s most important supplement! Read our amazing testimonials and experience vivid dreams again!
MitoCopper – First bioavailable copper cleans up your blood from pathogens and gives you more energy! Watch all videos on our website
Use code Alton777 for a 10% discount on products