Different cultures, different habits and different behavioral patterns – this applies not only to humans but also to chimpanzees, one of our two closest living relatives. A team of researchers from the Max Planck Institute for Evolutionary Anthropology (MPI-EVA) in Leipzig, Germany, and The University of Warsaw in Poland now describes a new ‘behavioral realm’ of the Eastern chimpanzee (Pan troglodytes schweinfurthii) of the Bili-Uéré region in Northern DR Congo, based on the results of a 12-year study.


Drawing of an Eastern chimpanzee (Pan troglodytes schweinfurthii) of the Bili-Uéré region in Northern DR Congo. 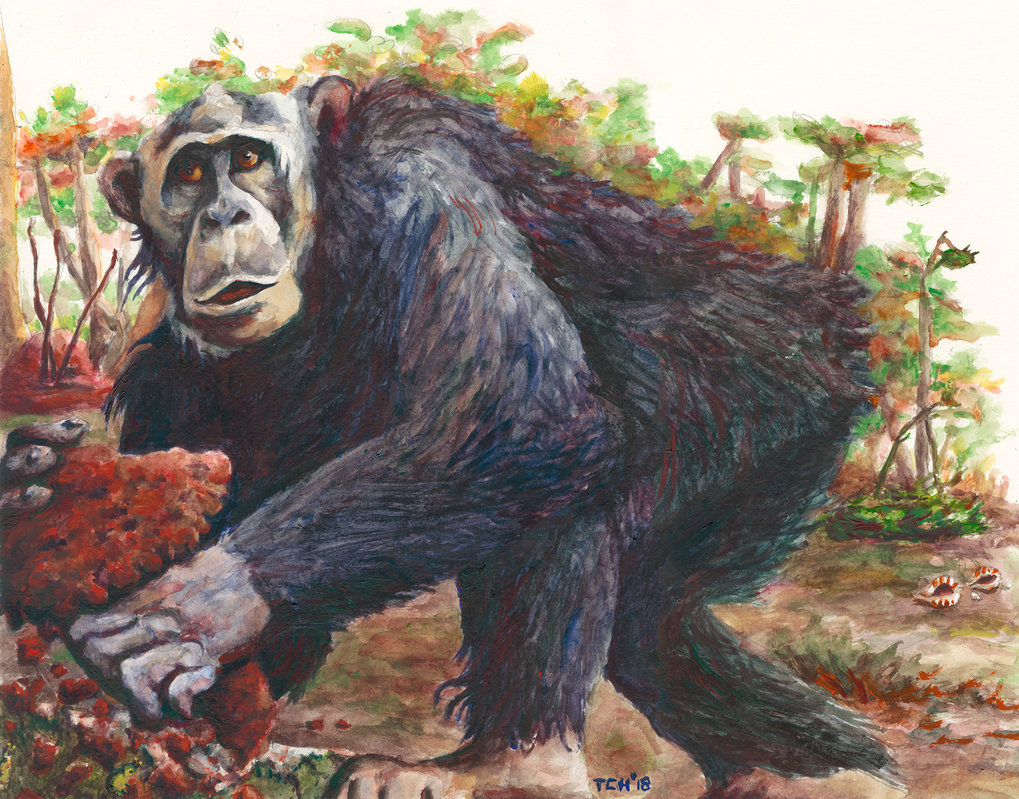 Chimpanzees have a more elaborate and diversified material culture than any other nonhuman primate. Their behavior varies across tropical Africa in a way that does not always correspond to ecology: for instance, only West African chimpanzees, but no others, use stone and wooden hammers to crack nuts in a number of populations, despite the wide availability of hammers and appropriate nuts across the species’ range. An understanding of the extent of this behavioral diversity is crucial to help researchers understand the likely incipient traditions of our own earliest hominin ancestors.

Previously, several large-scale behavioral patterns in chimpanzees have been documented, including the use of clubs to pound open beehives in Central Africa and long tools to scoop up algae across multiple sites in West Africa. A team of researchers from the MPI-EVA and the University of Warsaw now present a detailed description of a new ‘behavioral realm’ in Eastern chimpanzees (Pan troglodytes schweinfurthii) of the Bili-Uéré region, Northern DR Congo. This set of behaviors covers a minimum of 50,000 km² and possibly extends across an even larger area.

In addition, the researchers document an expanded percussive technology associated with food processing: in addition to pounding hard-shelled fruits against substrates (which is seen in other chimpanzee populations), the Bili-Uéré apes also pound open two kinds of termite mounds, Cubitermes sp. and Thoracotermes macrothorax, a resource that chimpanzees in most other regions ignore. These chimpanzees, on the other hand, appear not to exploit the common termite Macrotermes muelleri, for which chimpanzees fish at a number of other long-term research sites. "We have also documented tentative evidence of the pounding of African giant snails and tortoises against substrates, both novel food resources for chimpanzees. Finally, ground-nesting behavior is common across the area", adds Hicks. 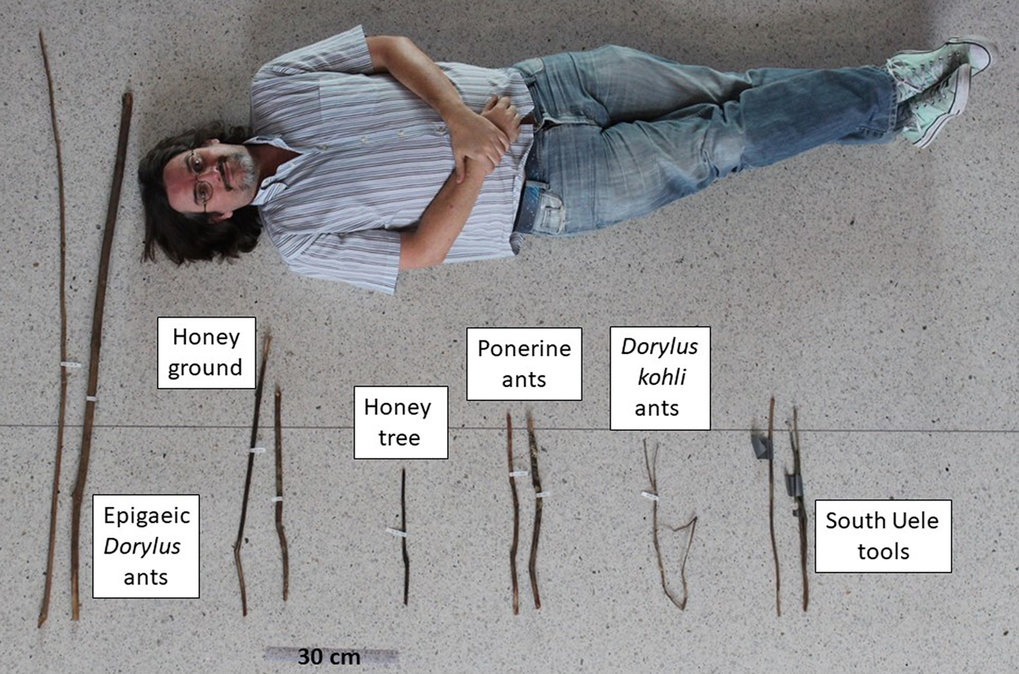 Despite an overall similarity of behaviors across two sides of a major river (the Uele) and in two very different habitat types (savannah-tropical forest mosaic to the north and tropical moist forest to the south), the research team encountered some geographic variation in the chimpanzees' behaviour, including differing encounter rates for epigaeic driver ant tools, a lack of honey-digging tools to the south; and long driver ant probes and fruit-pounding sites only to the north of the Uele River.

"Nowadays we may feel like we have already discovered all there is to discover. What a nice surprise, then, to find a new chimpanzee behavioral realm! This just goes to show that not everything has yet been mapped out, and we have so much more to learn about the natural world", says co-author Hjalmar Kühl, an ecologist at the MPI-EVA and the research center iDiv.

"In today’s overdeveloped world, opportunities such as this, to study a large intact nonhuman great ape culture interconnected across tens of thousands of kilometres of forest, are vanishingly rare", says Hicks. "We need such natural laboratories in order to understand the way in which material culture spreads among healthy, thriving populations of hominids. Without this, it may be difficult to envisage the innovations made by our own ancestors in the woodlands of Africa millions of years ago".
Christophe Boesch, director of the Department of Primatology at the MPI-EVA and a co-author of the study, says: "It is great to have found these fascinating behavioral traits in this population. We simply hope that the many threats they face won't wipe out these chimpanzees just as we are learning more about their uniqueness."

The 12-year research project was carried out in collaboration with The Lukuru Wildlife Research Foundation, The Wasmoeth Wildlife Foundation, the US Fish and Wildlife Service, L’Institut Congolais pour La Conservation de la Nature and the Institute for Biodiversity and Ecosystem Dynamics at the University of Amsterdam. Additional funding and support for the project was provided by and The Lucie Burgers Foundation for Comparative Behaviour Research in Arnhem, The Netherlands, The African Wildlife Foundation, and Karl Ammann