Monkeys from the North Sea - For the first time, Macaque Fossils Have Been Discovered at the Bottom of the North Sea

There was a time monkeys lived in the near the North Sea.

Together with two colleagues from the Netherlands, Senckenberg scientist Ralf-Dietrich Kahlke examined the teeth of several macaques from the bottom of the North Sea. They constitute the first fossil evidence of Old World monkeys from the guenon family (Cercopithecidae) in the North Sea region. The primate teeth were unearthed during the artificial accretion of sand for the “Maasvlakte 2” harbor extension near Rotterdam in the Netherlands. The study was recently published in the scientific journal “Revue de Paléobiologie.”

Yielding the remains of woolly rhinoceros, broad-fronted moose, cave lions and straight tusked elephant, the bottom of the North Sea has long been considered one of the most important fossil sites for the reconstruction of life in Europe during the Ice Age.

Left upper canine of the fossil macaque species from the bottom of the North Sea. 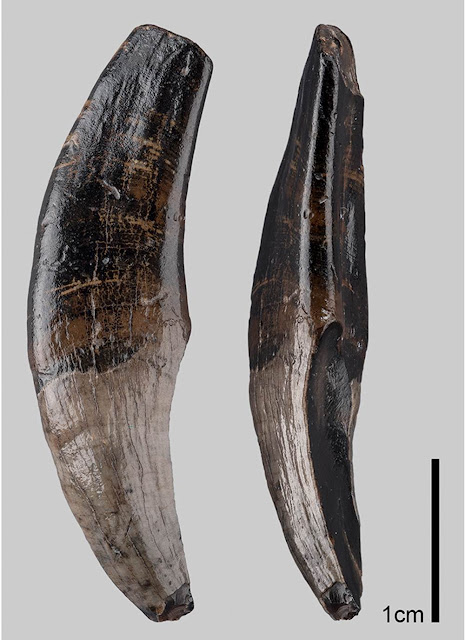 “The number of mammoth teeth from the North Sea alone surpasses 50,000”, according to an estimate by Dick Mol, a veteran researcher intimately acquainted with the local site conditions. Prof. Dr. Ralf-Dietrich Kahlke of the Senckenberg Research Station for Quaternary Paleontology in Weimar continues: “The large number of skeletal remains of Ice Age land mammals are evidence that large parts of the North Sea repeatedly were part of the European mainland. The long list of mammal species documented from the glacial and interglacial periods during the Ice Age can now be extended by adding a species of macaque.”

In the current study, the Dutch-German team of scientists led by Prof. Dr. Jelle W.F. Reumer of the University of Utrecht was able to assign several fossil teeth from the North Sea as well as a fragment of a lower jaw to the macaque species Macaca sylvanus. The discoveries date from different interglacial periods during the Ice Age. They came from animals that bore a striking resemblance to the modern Barbary macaques still found around the Rock of Gibraltar.

The fossils were retrieved from the “Maasvlakte 2”, an artificial island with modern industrial and harbor facilities near Rotterdam. To build the “Maasvlakte 2”, a mixture of sand and water was suctioned from the bottom of the North Sea at a distance of 10 to 20 kilometers and sprayed onto the artificial island using extremely high pressure. The resulting, giant spray fans often cause the formation of rainbows. “In this process, referred to as “rainbowing,” fossils are frequently transported from the sea bottom onto the island, where they are collected by specialists”, explains Reumer, and he adds: “This way, we were also able to obtain the extremely rare macaque teeth.”

“Maasvlakte 2“ – the discovery site of the studied primate fossils. 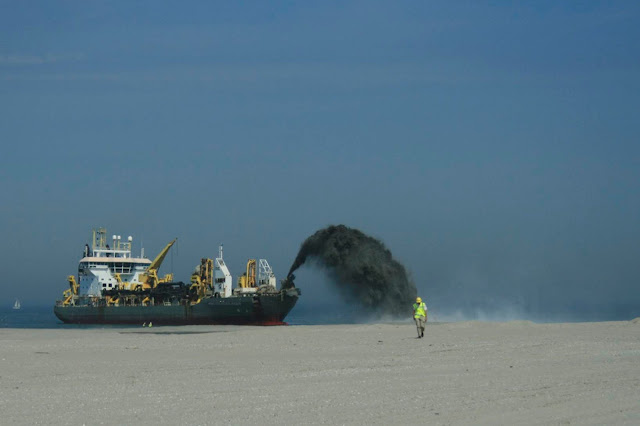 
But how do the bones of terrestrial mammals from the Ice Age end up at the bottom of the North Sea? Kahlke explains: “The region that is the North Sea today only flooded once the Ice Age glaciers began to melt, and the English Channel opened into an inlet. Prior to that time, the topography of Northwest Europe was primarily influenced by changing sea levels, which in turn were determined by the climate conditions. The retention of an enormous volume of water in the Ice Age glaciers caused the sea level to drop by up to 120 meters during the time of maximum glaciation in the last glacial period a little over 20,000 years ago. Large parts of the current North Sea also dried out and could be inhabited by terrestrial animals. They are the source of the bones we now find on the sea floor. Similar events also occurred in earlier periods.” 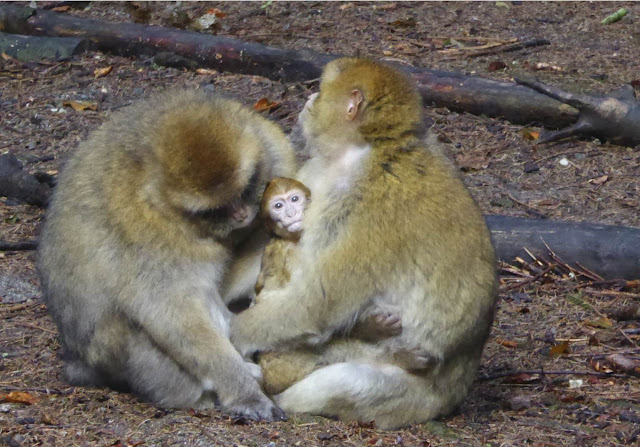 Modern macaques are adept climbers that prefer rocky landscapes. However, such rock formations did not exist during the Ice Age in the area of the current North Sea. The team of scientists assumes that the roughly 70-centimeter-long animals found refuge in trees instead. It therefore stands to reason that the macaques’ habitat – covered by water and sediments today – must have been at least partially forested.

“Unfortunately, we are unable to determine the age of the teeth with absolute certainty, since the fossils can no longer be assigned to their original sediment layer. A lower jaw fragment including a wisdom tooth probably dates from the Eemian Interglacial, 126,000 to 115,000 years ago. Due to their intensive mineralization, the other two fossils are likely much older”, according to Reumer, who adds in closing: “The new discoveries are proof that the North Sea still holds many secrets!”