Scientists at Tokyo Institute of Technology achieved magnetization reversal in cobalt-substituted bismuth ferrite by applying only an electric field. Such an effect had been sought after for over a decade in order to make new types of low-power-consumption magnetic memory devices.

In the era of information technology revolution, electronics demand rapid evolution facilitated by greater efforts from materials researchers to pave the way for further improvements and novel devices. In particular, a better understanding of the electromagnetic properties of various types of materials and new ways to harness them would allow for the fabrication of devices based on such principles. 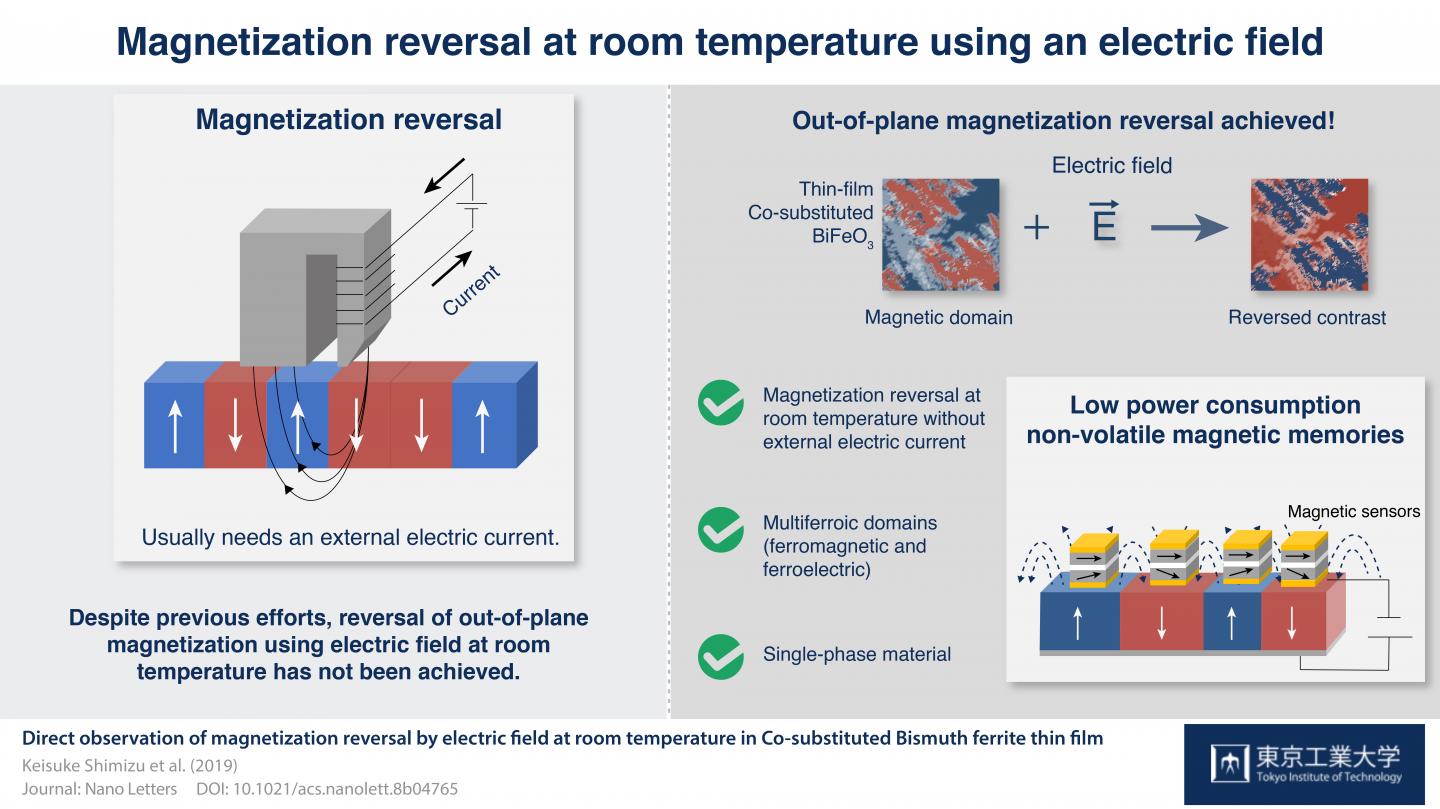 Two years ago, a research team from the Laboratory for Materials and Structures at Tokyo Institute of Technology (Tokyo Tech), led by Prof. Masaki Azuma, demonstrated very promising properties of Cobalt-substituted Bismuth ferrite (BFCO). This peculiar material exhibits both ferroelectric and ferromagnetic properties at room temperature; these two are coupled in a way that, the team inferred, could be exploited to exhibit reversal of the magnetization of the material by application of only an electric field at room temperature without the need of electric current.

Thus, the team fabricated thin BFCO films that exhibited spontaneous magnetization. Because BFCO is very sensitive to lattice strain, these thin films were grown on orthorhombic GdScO3, whose lattice structure matches that of BFCO maximally and bolster the growth of highly crystalline films with minimal lattice strain. After verifying the presence of the sought-after out-of-plane magnetization, the team went on to investigate the correlation between the ferromagnetic and ferroelectric domains to see if magnetization reversal was possible by switching electric polarization.

In the resulting piezoelectric force microscopy and magnetic force microscopy images, the researchers found that their attempts were successful and that it was indeed possible to achieve out-of-plane magnetization reversal using an electric field at room temperature. This represents the first time that such a feat was carried out, and could soon become the operating principle of a new type of memory device, as explains Azuma: "The current demonstration of magnetic reversal using an electric field paves the way to low power-consumption, non-volatile magnetic memories, such as magnetoresistive random-access memories." These findings also bring hope to all researchers in this particular field who, although had collectively been working on magnetization reversal for 15 years, had not yet reported such promising results.