How Snakes Lost Their Legs and Started Slithering

Snakes and lizards are reptiles that belong to the order Squamata. They share several traits but differ in one obvious respect: snakes do not have limbs. The two suborders diverged more than 100 million years ago.

Identification of the genetic factors involved in this loss of limbs is a focus of the article “Phenotype loss is associated with widespread divergence of the gene regulatory landscape in evolution” published by Juliana Gusson Roscito and collaborators in Nature Communications. Another equally interesting focus of the article is eye degeneration in certain subterranean mammals.

“We investigated these two cases in order to understand a much more general process, which is how genome changes during evolution lead to phenotype changes,” Roscito told Agência FAPESP.

Currently working as a researcher at the Max Planck Institute for Molecular Cell Biology and Genetics in Dresden, Germany, Roscito has been a postdoctoral fellow in Brazil and a research intern abroad with FAPESP’s support. Her postdoctoral scholarship was linked to the Thematic Project “Comparative phylogeography, phylogeny, paleoclimate modeling and taxonomy of neotropical reptiles and amphibians”, for which Miguel Trefaut Urbano Rodrigues is the principal investigator under the aegis of the FAPESP Research Program on Biodiversity Characterization, Conservation, Restoration and Sustainable Use (BIOTA-FAPESP).

Rodrigues is a Full Professor at the University of São Paulo’s Bioscience Institute (IB-USP) in Brazil and supervised Roscito’s postdoctoral research. He is also a coauthor of the recently published article.

“The research consisted of an investigation of the genomes of several species of vertebrates, including the identification of genomic regions that changed only in snakes or subterranean mammals, while remaining unchanged in other species that have not lost their limbs or have normal eyes,” Roscito said.

“In mammals with degenerated visual systems, we know several genes have been lost, such as those associated with the eye’s crystalline lens and with the retina’s photoreceptor cells. These genes underwent mutations during the evolutionary process. Eventually, they completely lost their functionality, meaning the capacity to encode proteins. But that’s not what happened to snakes, which haven’t lost the genes associated with limb formation. To be more precise, the study that sequenced the genome of a snake did detect the loss of one gene, but only one. Therefore, the approach we chose in our research consisted of investigating not the genes but the elements that regulate gene expression.”

Gene expression depends on regulatory elements for the information the gene contains to be transcribed into RNA (ribonucleic acid) and later translated into protein. This process is regulated by cis-regulatory elements (CREs), which are sequences of nucleotides in DNA (deoxyribonucleic acid) located near the genes they regulate. CREs control the spatiotemporal and quantitative patterns of gene expression.

From a computational standpoint, CREs are not as easy to identify as genes. Genes have a characteristic syntax, with base pairs that show where the genes begin and end. This is not the case for CREs, so they have to be identified indirectly. This identification is normally based on the conservation of DNA sequences among many different species.

Black and white Tegu lizard in the Florida Everglades 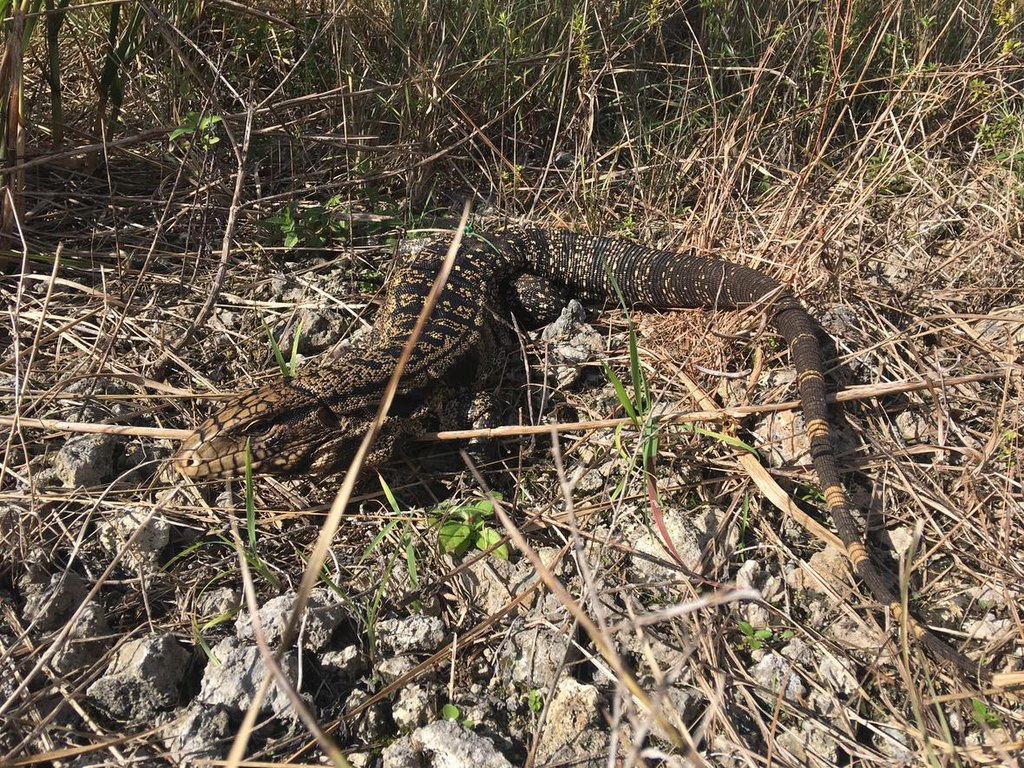 “To detect the divergence of specific sequences in snakes, it’s necessary to compare the genomes of snakes with the genomes of various reptiles and other vertebrates that have fully developed limbs. Genome sequences for reptiles with well-developed limbs are scarce, so we sequenced and assembled the genome of the fully limbed tegu lizard, Salvator merianae. This is the first species of the teiid lineage ever sequenced,” the authors said.

“Using the tegu genome as a reference, we created an alignment of the genomes of several species, including two snakes (boa and python), three other limbed reptiles (green anole lizard, dragon lizard and gecko), three birds, an alligator, three turtles, 14 mammals, a frog, and a coelacanth. This alignment of 29 genomes was used as the basis for all further analyses.”

The researchers identified more than 5,000 DNA regions that are considered candidate regulatory elements in several species. They then searched the large database using ingenious technical procedures that are described in detail in the article and obtained a set of CREs the mutation of which may have led to the disappearance of limbs in the ancestors of snakes.

“There are several studies concerning a well-known regulatory element that regulates a gene that, when modified, causes various defects in limbs. Snakes have mutations in this CRE. In a study published in 2016, the mouse CRE was replaced with the snake version, resulting in practically limbless descendants. This was a functional demonstration of a mechanism that may have led to limb loss in snakes. However, this CRE is only one of the regulatory elements for one of several genes that control limb formation,” Roscito said.

“Our study extended the set of CREs. We showed that several other regulatory elements responsible for regulating many genes have mutated in snakes. The signature is far more comprehensive. An entire signaling cascade is affected.”
Contacts and sources:
José Tadeu Arantes