It seems when things get cold enough they begin to defy the laws of physics and that can be a good thing for the future.


JILA researchers have made a long-lived, record-cold gas of molecules that follow the wave patterns of quantum mechanics instead of the strictly particle nature of ordinary classical physics. The creation of this gas boosts the odds for advances in fields such as designer chemistry and quantum computing.

As featured on the cover of the Feb. 22 issue of Science, the team produced a gas of potassium–rubidium (KRb) molecules at temperatures as low as 50 nanokelvin (nK). That’s 50 billionths of a Kelvin, or just a smidge above absolute zero, the lowest theoretically possible temperature. The molecules are in the lowest-possible energy states, making up what is known as a degenerate Fermi gas. 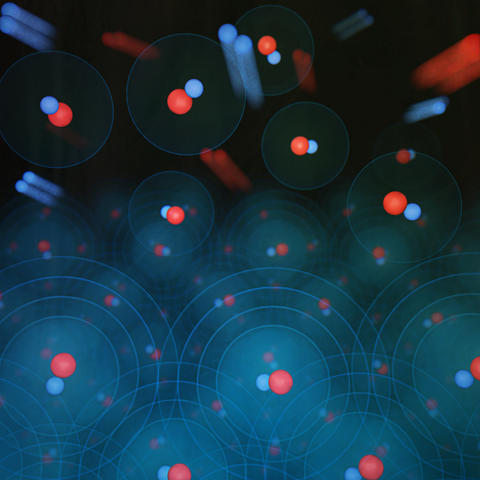 In a quantum gas, all of the molecules’ properties are restricted to specific values, or quantized, like rungs on a ladder or notes on a musical scale. Chilling the gas to the lowest temperatures gives researchers maximum control over the molecules. The two atoms involved are in different classes: Potassium is a fermion (with an odd number of subatomic components called protons and neutrons) and rubidium is a boson (with an even number of subatomic components). The resulting molecules have a Fermi character.

JILA is jointly operated by the National Institute of Standards and Technology (NIST) and the University of Colorado Boulder. NIST researchers at JILA have been working for years to understand and control ultracold molecules, which are more complex than atoms because they not only have many internal energy levels but also rotate and vibrate. The JILA team made their first molecular gas 10 years ago.

“The basic techniques for making the gas are the same ones we’ve used before, but we have a few new tricks such as significantly improving the cooling of the atoms, creating more of them in the lowest-energy state,” NIST/JILA Fellow Jun Ye said. “This results in a higher conversion efficiency so we get more molecules.”

Before now, the coldest two-atom molecules were produced in maximum numbers of tens of thousands and at temperatures no lower than a few hundred nanoKelvin. JILA’s latest gas temperature record is much lower than (about one-third of) the level where quantum effects start to take over from classical effects, and the molecules last for a few seconds—remarkable longevity, Ye said.

The new gas is the first to get cold and dense enough for the matter waves of these molecules to be longer than distances between them, making them overlap with each other to create a new entity. Scientists call this quantum degeneracy. (Quantum matter can behave as either particles or matter waves, that is, waveform patterns of the probability of a particle’s location).

Quantum degeneracy also means an increase in the repulsion among fermionic particles, which tend to be loners anyway, resulting in fewer chemical reactions and a more stable gas. This is the first experiment in which scientists have observed collective quantum effects directly affecting the chemistry of individual molecules, Ye said.

“This is the first quantum degenerate gas of stable molecules in bulk, and the chemical reactions are suppressed—a result that nobody had predicted,” Ye said.

The process for making the molecules begins with a gas mixture of very cold potassium and rubidium atoms confined by a laser beam. By sweeping a precisely tuned magnetic field across the atoms, scientists create large, weakly bound molecules containing one atom of each type. This technique was pioneered by Ye’s colleague, the late Deborah Jin, in her 2003 demonstration of the world's first Fermi condensate.

To convert these relatively fluffy molecules into tightly bound molecules without heating the gas, scientists use two lasers operating at different frequencies—each resonating with a different energy jump in the molecules—to convert the binding energy into light instead of heat. The molecules absorb near-infrared laser light and release red light. In the process, 90 percent of the molecules are converted through an intermediate energy state, to the lowest and most stable energy level.

The research is supported by NIST, the Air Force Office of Scientific Research, the Army Research Office and the National Science Foundation.