Undersea carbon reservoirs have caused global warming before — and it could happen again, according to research by an international team of scientists led by USC

The world’s oceans could harbor an unpleasant surprise for global warming, based on new research that shows how naturally occurring carbon gases trapped in reservoirs atop the seafloor escaped to superheat the planet in prehistory.

Bubbles of liquid carbon dioxide float out of the seafloor at a vent on Northwest Eifuku volcano off the coast of Japan. 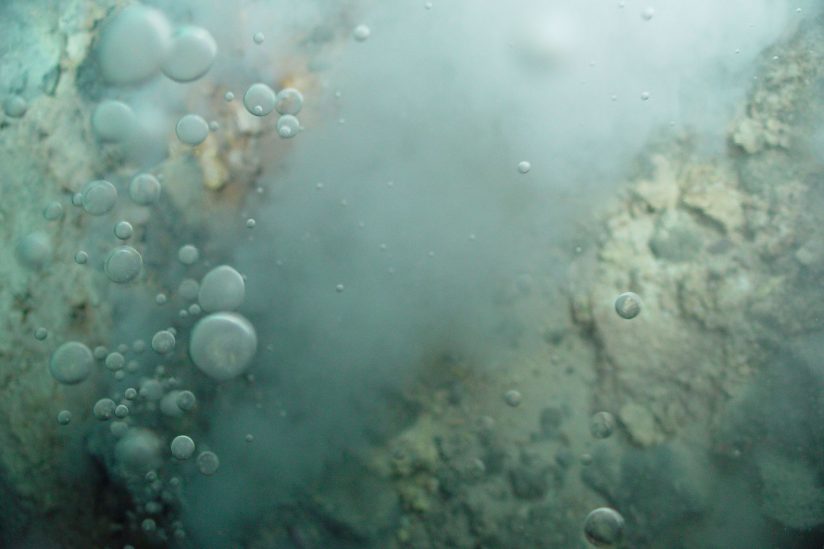 Scientists say events that began on the ocean bottom thousands of years ago so disrupted the Earth’s atmosphere that it melted away the ice age. Those new findings challenge a long-standing paradigm that ocean water alone regulated carbon dioxide in the atmosphere during glacial cycles. Instead, the study shows geologic processes can dramatically upset the carbon cycle and cause global change.

For today’s world, the findings could portend an ominous development. The undersea carbon reservoirs released greenhouse gas to the atmosphere as oceans warmed, the study shows, and today the ocean is heating up again due to manmade global warming.

Moreover, the phenomenon is a threat unaccounted for in climate model projections. Undersea carbon dioxide reservoirs are relatively recent discoveries and their characteristics and history are only beginning to be understood.

Those findings come from a new research paper produced by an international team of Earth scientists led by USC and published in January in the journal Environmental Research Letters.

“We’re using the past as a way to anticipate the future,” said Lowell Stott, professor of Earth sciences at the USC Dornsife College of Letters, Arts and Sciences and lead author of the study. “We know there are vast reservoirs of carbon gas at the bottom of the oceans. We know when they were disrupted during the Pleistocene it warmed the planet.

“We have to know if these carbon reservoirs could be destabilized again. It’s a wild card for which we need to account.”

At issue are expanses of carbon dioxide and methane accumulating underwater and scattered across the seafloor. They form as volcanic activity releases heat and gases that can congeal into liquid and solid hydrates, which are compounds stuck together in an icy slurry that encapsulates the reservoirs.
Undersea carbon reservoirs vulnerable in a warming ocean

These undersea carbon reservoirs largely stay put unless perturbed, but the new study shows the natural reservoirs are vulnerable in a warming ocean and provides proof the Earth’s climate has been affected by rapid release of geologic carbon.

The scientists say it occurred in the distant past when the Earth was much warmer, and it’s happened more recently — about 17,000 years ago at the end of the Pleistocene epoch when glaciers advanced and receded, which is the focus on the new study. Warming was evident due to changes in atmospheric greenhouse gas concentrations, based on ice cores, marine and continental records.

But how did that happen? What forced such dramatic change in the first place? Scientists have been searching for that answer for 40 years, with focus on oceans because they’re a giant carbon sink and play a central role in carbon dioxide variations.

They soon realized that processes that regulate carbon to the ocean operated too slowly to account for the surge in atmospheric greenhouse gases that led to warming that ended the ice age. So, scientists around the world began examining the role of Earth’s hydrothermal systems and their impact on deep-ocean carbon to see how it affected the atmosphere.

The new study by scientists at USC, the Australian National University and Lund University in Sweden, focused on the Eastern Equatorial Pacific (EEP) hundreds of miles off the coast of Ecuador. The EEP is a primary conduit through which the ocean releases carbon to the atmosphere.

The scientists report evidence of deep-sea hydrothermal systems releasing greenhouse gases to the ocean and atmosphere at the end of the last ice age, just as the oceans were beginning to warm. They measured increased deposition of hydrothermal metals in ancient marine sediments. They correlated glaciation intervals with variations in atmospheric carbon dioxide with differences in marine microorganism ages. They found a four-fold increase in zinc in protozoa (foraminifera) shells, a telltale sign of widespread hydrothermal activity.

Taken together, the new data show that there were major releases of naturally occurring carbon from the EEP, which contributed to dramatic change in Earth’s temperature as the ice age was ending, the study says.

Elsewhere around the world, more and more deep-ocean carbon reservoirs are being discovered. They mostly occur near hydrothermal vents, of which scores have been identified so far, especially in the Pacific, Atlantic and Indian oceans. They occur where the Earth’s crust spreads or collides, creating ideal conditions for the formation of deep-sea carbon dioxide reservoirs. Only about one-third of the ocean’s volcanic regions have been surveyed.

One such reservoir of undersea carbon dioxide, seen in an accompanying video, was discovered about 4,000 feet deep off the coast of Taiwan. Similar discoveries of carbon gas reservoirs have been made off the coast of Okinawa, in the Aegean Sea, in the Gulf of California and off the west coast of Canada.

“The grand challenge is we don’t have estimates of the size of these or which ones are particularly vulnerable to destabilization,” Stott said. “It’s something that needs to be determined.”

. (Video/The National Academy of Sciences of the USA)

In many cases, the carbon reservoirs are bottled up by their hydrate caps. But those covers are sensitive to temperature changes. As oceans warm, the caps can melt, a development the paper warns would lead to a double wallop for climate change — a new source of geologic carbon in addition to the manmade greenhouse gases.

Oceans absorb nearly all the excess energy from the Earth’s atmosphere, and as a result they have been warming rapidly in recent decades. Over the past quarter-century, Earth’s oceans have retained 60 percent more heat each year than scientists previously had thought, other studies have shown. Throughout the marine water column, ocean heat has increased for the last 50 years. The federal government’s Climate Science Special Report projected a global increase in average sea surface temperatures of up to 5 degrees Fahrenheit by the end of the century, given current emissions rates. Temperature gains of that magnitude throughout the ocean could eventually destabilize the geologic hydrate reservoirs, Stott said.

“The last time it happened, climate change was so great it caused the end of the ice age. Once that geologic process begins, we can’t turn it off,” Stott said.

Moreover, other similar events have happened in the distant past, helping shape the Earth’s environment over and over again. In earlier research, Stott discovered a large, carbon anomaly that occurred 55 million years ago. It disrupted the ocean’s chemistry, causing extensive dissolution of marine carbonates and the extinction of many marine organisms. The ocean changes were accompanied by a rapid rise in global temperatures, an event called the Paleocene-Eocene Thermal Maxima (PETM), a period lasting less than 20,000 years during which so much carbon was released to the atmosphere that Earth’s temperatures surged to about 8 degrees Celsius hotter than today.

“Until quite recently, we had no idea these events occurred. The PETM event is a good analog for what can happen when undersea carbon escapes through the water column to the atmosphere. And now we know the PETM event was not a unique event, that this has happened more recently,” Stott said.

The study comes with some caveats. Much of the ocean floor is unexplored, so scientists don’t know the full extent of the carbon dioxide reservoirs. There is no inventory of greenhouse gases from these geologic sources. And ocean warming is not uniform, making it difficult to predict when and where the undersea carbon reservoirs will be affected. It would take much more study to answer those questions.

Nonetheless, the study makes clear the undersea carbon reservoirs are at risk.

“Geologic carbon reservoirs such as these are not explicitly included in current marine carbon budgets” used to model the impacts of climate change, the study says. Yet, “even if only a small percentage of the unsampled hydrothermal systems contain separate gas or liquid carbon dioxide phases, it could change the global marine carbon budget substantially.”

Said Stott: “Discoveries of accumulations of liquid, hydrate and gaseous carbon dioxide in the ocean has not been accounted for because we didn’t know these reservoirs existed until recently, and we didn’t know they affected global change in a significant way.

“This study shows that we’ve been missing a critical component of the marine carbon budget. It shows these geologic reservoirs can release large amounts of carbon from the oceans. Our paper makes the case that this process has happened before and it could happen again.”