Some 27,000 years ago in central Belize, a giant sloth was thirsty. The region was arid, not like today’s steamy jungle. The Last Glacial Maximum had locked up much of Earth’s moisture in polar ice caps and glaciers. Water tables in the area were low.

The sloth, a beast that stood up to 4 meters tall, eventually found water – in a deep sinkhole with steep walls down to the water. That is where it took its final drink. In 2014, divers found some of the sloth’s remains – parts of a tooth, humerus and femur – while searching for ancient Maya artifacts in the pool, in Cara Blanca, Belize.

Researchers analyzed the orthodentin and the cementum in the sloth tooth. Pits mark locations where samples were collected for analysis. 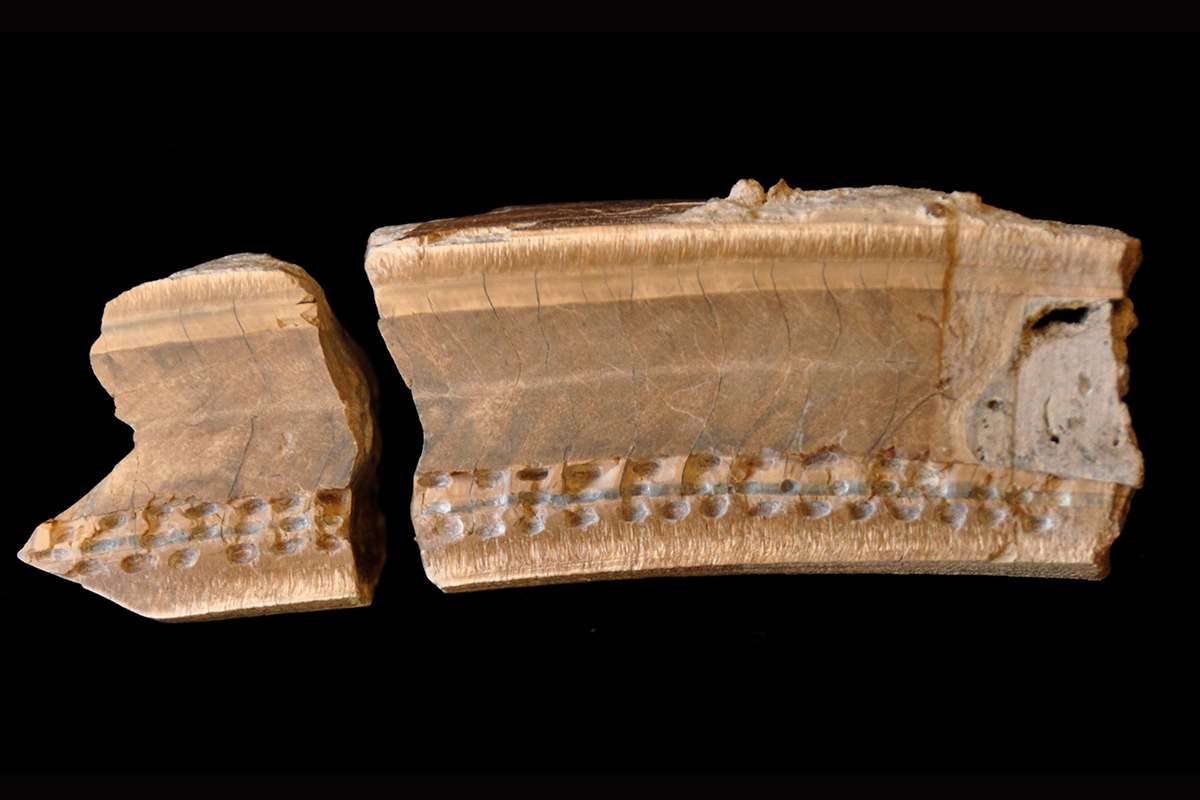 Though partially fossilized, the tooth still held enough unaltered tissue for stable carbon and oxygen isotope analysis, which provided clues to what the sloth ate in the last year of its life. This, in turn, revealed much about the local climate and environment of the region at the time. The findings, reported in the journal Science Advances, will aid the study of similar fossils in the future, the researchers said.


The ancient sloth, Eremotherium laurillardi, grew up to 4 meters in height. 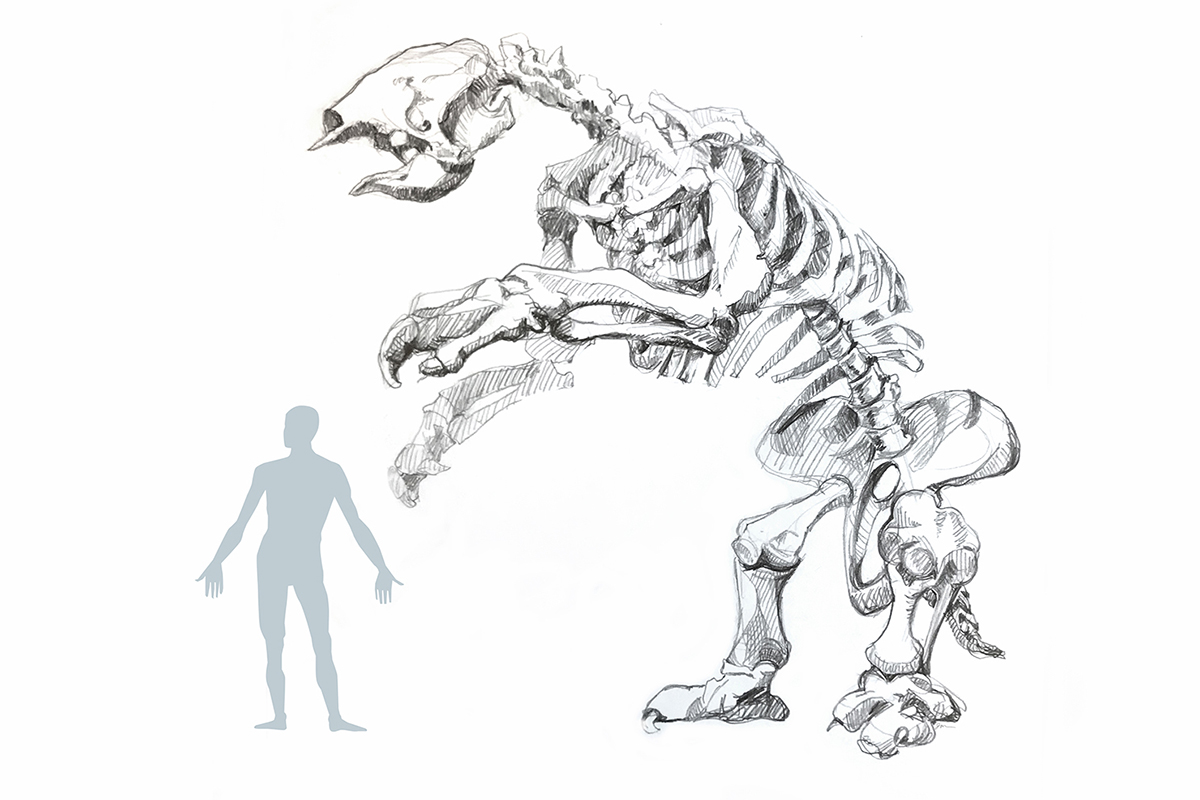 “We began our study with the hopes of gaining a better understanding of the landscape within which large mammals went extinct and humans emerged in central Belize,” said University of Illinois graduate student Jean T. Larmon, who led the research with U. of I. anthropology professors Lisa Lucero and Stanley Ambrose. “In the process, we discovered which part of the tooth had best maintained its integrity for analysis. And we refined methods for studying similar specimens in the future.”

While searching for ancient Maya artifacts in a sinkhole in central Belize, U. of I. anthropology professor Lisa Lucero and her colleagues discovered the remains of an extinct giant sloth. An analysis of the sloth tooth offers insight into the climate and environment of the region 27,000 years ago. 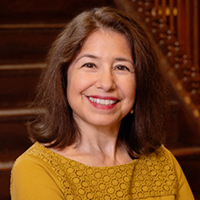 The new findings “add to the evidence that many factors, in addition to a changing climate, contributed to the extinction of megafauna in the Americas,” said Lucero, who studies the ancient Maya of central Belize. “One of those potential factors is the arrival of humans on the scene 12,000 to 13,000 years ago.”

The teeth of giant sloths like the one found in Belize, Eremotherium laurillardi, differ from those of other large mammals, like mammoths, that went extinct between 14,000 and 10,000 years ago, Larmon said.

“Giant sloth teeth have no enamel, the hard, outer layer of human and some animal teeth that can be analyzed to learn about their diet,” she said.


Pool 1, where the ancient sloth tooth was discovered. The structure at the bottom of the photo is an ancient Maya ceremonial platform 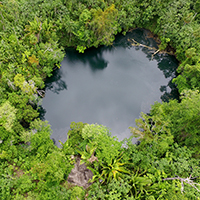 Other factors have limited scientists’ ability to study the teeth of ancient sloths. Most are fossilized, with minerals replacing much or all of the original tissue and bone.

By using cathodoluminescence microscopy, a technique that causes minerals to glow and can detect the extent of mineralization in fossils, the researchers discovered that one type of tooth tissue, the dense orthodentin, was largely intact.


Study co-author Greg McDonald extracted a sloth tooth from this fossil bed in a large sinkhole in central Belize. 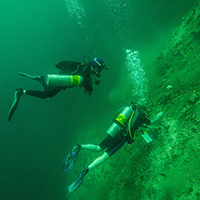 Larmon drilled 20 samples of orthodentin for isotopic analysis along the 10-centimeter-long tooth fragment, spanning more than a year of tooth growth.

“This allowed us to trace monthly and seasonal changes in the sloth’s diet and climate for the first time, and also to select the best part of the tooth for reliable radiocarbon dating,” Ambrose said.

Divers found the sloth tooth in one of several large pools in the Cara Blanca region of central Belize. 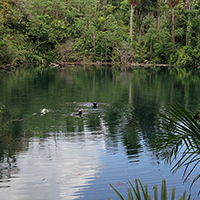 “We were able to see that this huge, social creature was able to adapt rather readily to the dry climate, shifting its subsistence to relying upon what was more available or palatable,” Larmon said.

“This supports the idea that the sloths had a diverse diet,” Lucero said. “That helps explain why they were so widespread and why they lasted so long. It’s likely because they were highly adaptable.”