A River of Stars Flowing Not Far from Earth Discovered

At the galactic south pole, not far from Earth, a river of stars flow across the southern hemisphere

Astronomy & Astrophysics publishes the work of researchers from the University of Vienna, who have found a river of stars, a stellar stream in astronomical parlance, covering most of the southern sky. The stream is relatively nearby and contains at least 4000 stars that have been moving together in space since they formed, about 1 billion years ago.

Due to its proximity to Earth, this stream is a perfect workbench on which to test the disruption of clusters, measure the gravitational field of the Milky Way, and learn about coeval extrasolar planet populations with upcoming planet-finding missions. For their search, the authors used data from the ESA Gaia satellite.

Fig. 1. Night sky centered on the south Galactic pole in a so-called stereographic projection. In this special projection, the Milky Way curves around the entire image in an arc. The stars in the stream are displayed in red and cover almost the entire southern Galactic hemisphere, thereby crossing many well-known constellations 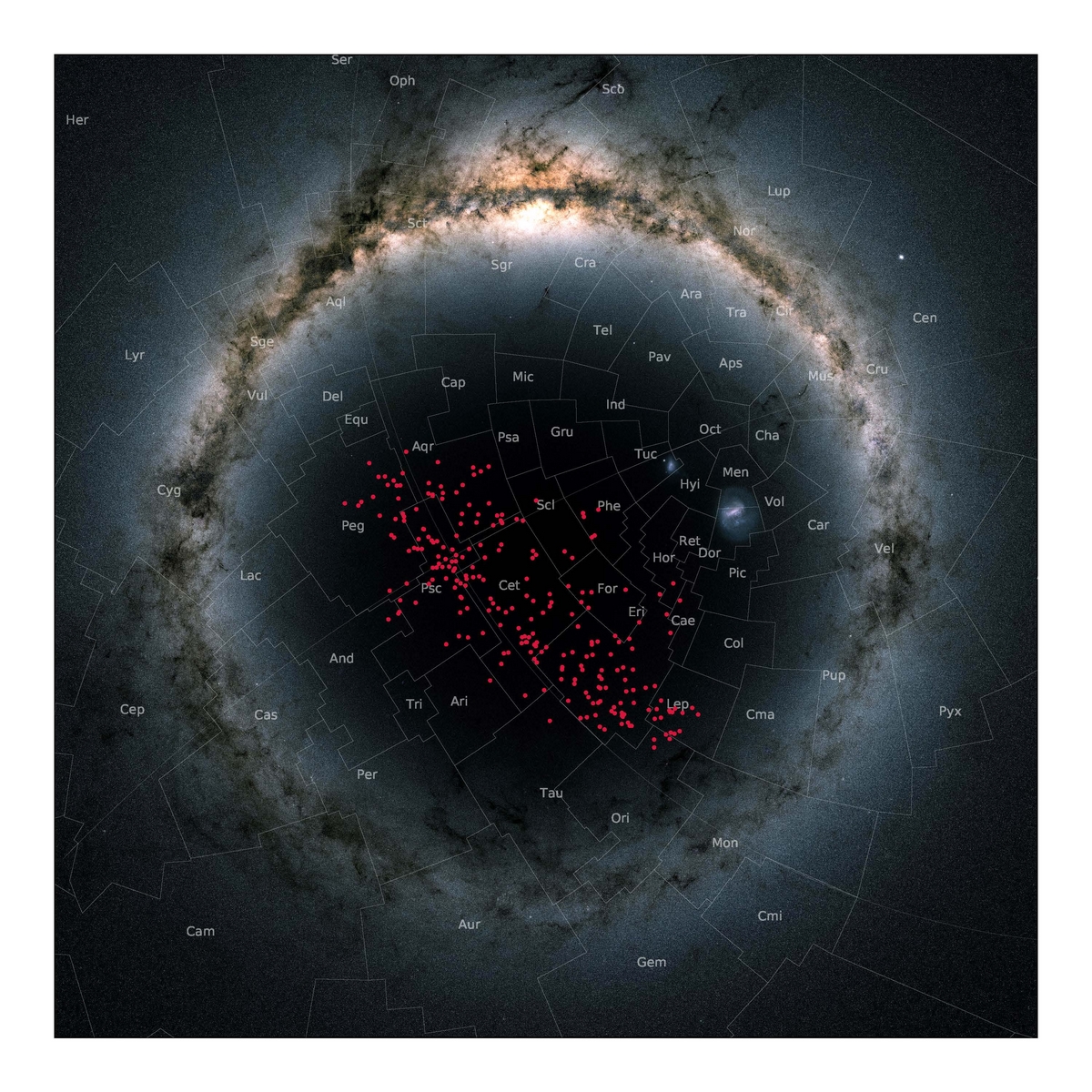 Our own host galaxy, the Milky Way, is home to star clusters of variable sizes and ages. We find many baby clusters within molecular clouds, fewer middle-age and old age clusters in the Galactic disk, and even fewer massive, old globular clusters in the halo. These clusters, regardless of their origin and age, are all subject to tidal forces along their orbits in the Galaxy. Given enough time, the Milky Way gravitational forces relentlessly pull them apart, dispersing their stars into the collection of stars we know as the Milky Way.

“Most star clusters in the Galactic disk disperse rapidly after their birth as they do not contain enough stars to create a deep gravitational potential well, or in other words, they do not have enough glue to keep them together. Even in the immediate solar neighborhood, there are, however, a few clusters with sufficient stellar mass to remain bound for several hundred million years. So, in principle, similar, large, stream-like remnants of clusters or associations should also be part of the Milky Way disk.“ says Stefan Meingast, lead author of the paper published in Astronomy & Astrophysics.

Thanks to the precision of the Gaia measurements, the authors could measure the 3D motion of stars in space. When carefully looking at the distribution of nearby stars moving together, one particular group of stars, as yet unknown and unstudied, immediately caught the eye of the researchers. It was a group of stars that showed precisely the expected characteristics of a cluster of stars born together but being pulled apart by the gravitational field of the Milky Way.

"Identifying nearby disk streams is like looking for the proverbial needle in a haystack. Astronomers have been looking at, and through, this new stream for a long time, as it covers most of the night sky, but only now realize it is there, and it is huge, and shockingly close to the Sun” says João Alves, second author of the paper. "Finding things close to home is very useful, it means they are not too faint nor too blurred for further detailed exploration, as astronomers dream."

Due to sensitivity limitations of the Gaia observations, their selection only contained about 200 sources. An extrapolation beyond these limits suggests the stream should have at least 4000 stars, thereby making the structure more massive than most know clusters in the immediate solar neighborhood. The authors also determined the stream’s age to be around one billion years. As such, it already has completed four full orbits around the Galaxy, enough time to develop the stream-like structure as a consequence of gravitational interaction with the Milky Way disk.

“As soon as we investigated this particular group of stars in more detail, we knew that we had found what we were looking for: A coeval, stream-like structure, stretching for hundreds of parsecs across a third of the entire sky.” Says Verena Fürnkranz, co-author and Masters student at the University of Vienna. "It was so thrilling to be part of a new discovery" she adds.

This newly discovered nearby system can be used as a valuable gravity probe to measure the mass of the Galaxy. With follow-up work, this stream can tell us how galaxies get their stars, test the gravitational field of the Milky Way, and, because of its proximity, become a wonderful target for planet-finding missions. The authors hope to unravel even more such structures in the future with the help of the rich Gaia database.


Citation:' "Extended stellar systems in the solar neighborhood. II. Discovery of a nearby 120° stellar stream in Gaia DR2",  by Stefan Meingast, João Alves, and Verena Fürnkranz,