The Mysteries of the Hagfish's Slimy Defense Solved

The hagfish dates back at least 300 million years. The secret of survival for these eel-like sea creatures can be found in the rate and volume of slime it produces to fend off predators. Interestingly, the oldest fossils of these eel-like sea creatures, were found in Illinois, and today researchers from the University of Illinois at Urbana-Champaign are beginning to uncover the mystery of how the hagfish uses this substance to choke its predators. 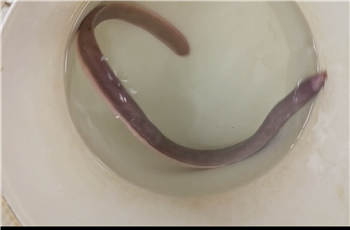 “Hagfish are both amazing and disgusting at the same time,” noted Randy Ewoldt, associate professor of mechanical science and engineering at Illinois, who has studied the hagfish for about a decade. “The reason that they are disgusting explains how they have survived all this time.”

Ewoldt along with first author Gaurav Chaudhary, a PhD student in Ewoldt’s lab, and Jean-Luc Thiffeault, a mathematician from the University of Wisconsin, have shared their findings on “Unraveling Hagfish Slime,” in a paper published by the Journal of the Royal Society Interface.

Their work is receiving much interest, including features in Newsweek, New Scientist, and Ars Technica, and Science Magazine.

The fact that they are slimy has been known for a number of years, but it wasn’t until this decade that there was finally evidence of the hagfish using its slime to clog up the gills of some suction-feeding predators, confirming the suspicions as to why the hagfish produces the slime.

“When the hagfish create this slime, they do so in an incredibly efficient way in that the amount of material they put into the water grows in a volume by a factor of up to 10,000 to make the final slimy gel,” Ewoldt explained. “The volumetric increase is astounding and as far as I know untouched by anything else in nature or anything we’ve done as engineers.”

Ewoldt admits that although there are a number of real-world applications that will likely be designed in the future using the hagfish’s method (The United States Navy is interested in using the material in defense, for instance), explaining how the hagfish produces this material was more curiosity-driven research.

“We wanted to investigate the whys behind just how amazingly curious and weird this thing is,” Ewoldt said “The interesting physics and the fact that there is no clear analogy became our motivation for trying to explain it.”

The Royal Society Interface publishes results of research that are at the interface of different sciences. In this case, explaining the mysterious hagfish met at the intersection of physics, applied mathematics, and biology.

“The hagfish slime doesn’t maintain the same topology while expanding in volume, it really fundamentally changes as threads unravel and its volume increases,” Ewoldt said. “The focus of this study was on this unique mechanism.”

The team of researchers discovered that hagfish can unfurl a skein of slime in a fraction of a second. 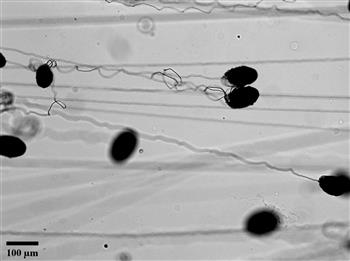 What the team discovered was that the hagfish threads, 100 times thinner than a human hair and initially wound up like a skein of yarn, can unravel in the blink of an eye due to fluid flow. In doing so, it can go from a size of about 0.1 millimeter to 10 centimeters in length, or a water incorporation in a magnitude of 10,000:1.

The work builds on papers that Ewoldt has published from as far back as 10 years ago in collaborating with experimental biologists, including Doug Fudge, an associate professor at Chapman University and the keeper of some hagfish.

The team of Chaudhary, Ewoldt, and Thiffeault hypothesized that the fluid flow was actually making this happen rather than it being like a chemical explosion. Using material generated by the hagfish in Fudge’s care, the team created a model using both mathematics and physics to test the hypothesis and discovered that the time and volume of the slime’s unraveling was correlated to the viscosity and flow of the surrounding liquid. In other words, if the slime were put in still water, it wouldn’t be able to unravel, but in the midst of some attack, there would be enough fluid flow for the slime to unravel.

Ewoldt noted that because attacks on the hagfish happen under different conditions, his team had to simplify to come up with a model scenario. Another driving factor likely affecting this process has yet to be measured – that is the stickiness inside the thread, which could provide some resistance.

“Because that physical resistance in the hagfish case has never been measured, we had to really generalize our mathematical model and use some reasonable range of values to do this,” Ewoldt said. “One really powerful way to do this is to write down governing equations and use dimensional analysis to take the complicated high dimensional equations and find a way to simplify them. The robustness of the conclusion is that it wasn’t just a single value of a property, instead a range of things that we could cover by framing the mathematics of this in a powerful way.”

In the end, under various conditions, the team concluded that this unraveling from about 0.1 millimeters to about 10 centimeters can happen in less than a few hundred milliseconds.

While the resulting slime gel is a solid, it is soft enough to take the form of its container, making it almost undetectable by the eye in a bucket of water. It is also strong enough and non-permeable enough to virtually stop the flow of water.

In the future, Ewoldt, a leading expert in the study of rheology, and his team, want to further study its hydraulic permeability and ultimately play a part in developing materials with the same property.

“I would love to think more about the material design aspect,” Ewoldt said. “We still haven’t figured out how to make a material like this, which swells up in water and clogs things up in a marine environment.”

You can say that when it comes to the hagfish, a creature that has survived at least 300 million years, there is still more mysteries to unravel.