Rare Hypernova Completes the Picture of the Death of Massive Stars

The end of a star's life can occur in a tranquil manner in the case of low mass stars, such as the Sun. This is not the case, however, for very massive stars, which suffer such extreme explosive events that they can outshine the brightness of the whole galaxy that hosts them. An international group of astronomers has published a detailed study of the death of a high-mass star that produced a gamma-ray burst (GRB) and a hypernova, in which they have detected a new component in this type of events. The study, published in Nature, provides a link that completes the scenario that relates hypernovae with GRBs.

"The first hypernova was detected in 1998 as a very energetic type of supernova that followed a gamma-ray burst. This was the first evidence of the connection between both phenomena" says Luca Izzo, researcher at the Institute of Astrophysics of Andalusia (IAA-CSIC), and leader the study.


The scenario that has been proposed to explain the phenomena involves a star over 25 times more massive than the Sun that, once it has exhausted its fuel, suffers the collapse of its core. During this collapse, the nucleus of the star transforms either into a neutron star or a black hole, and at the same time, two polar jets of matter are ejected. These jets drill through the external layers of the star and, once out of the star, produce detectable gamma-rays (the so-called GRB). Finally, the external layers of the star are ejected, generating a hypernova explosion, tens of times brighter than a typical supernova.

Although the connection between GRBs and hypernovae has been well established over the last 20 years, the opposite is not so clear, since there have been several hypernovae that do not have associated GRBs. "This work has allowed us to find the missing link between these two types of hypernova through the detection of an additional component: A sort of hot cocoon generated around the jet, as it propagates through the outer layers of the progenitor star - indicates Dr. Izzo (IAA-CSIC) -. The jet transfers a significant part of its energy to the cocoon and, if it manages to reach the surface of the star, will produce the gamma-ray emission that we know as a GRB".

On the other hand, the jet can fail to pierce the external layers of the star and never emerge into the circumstellar medium if it lacks the necessary energy. In this case we would observe a hypernova but not a GRB. The cocoon detected in this study is the link between the two subtypes of hypernovae that had been studied until now, and the chocked jets would naturally explain the observed differences.

The international team of scientists, including astronomers from the Universities of Leicester, Bath and Warwick, found evidence for the existence of a 'hot cocoon' of material enveloping a relativistic jet escaping a dying star. This research is published online today (Wednesday 16 January) and in print in Nature tomorrow (Thursday 17 January).

A relativistic jet is a very powerful phenomena which involves plasma jets shooting out of black holes at close to the speed of light, and can extend across millions of light years.

This is an artist representation of the hypernova. The interaction of the jet with the outer layers of the star forms a cocoon that surrounds the head of the jet and begins to propagate laterally with respect to the direction of the jet. The jet is capable of completely perforating the envelope of the parent star, emitting high energy gamma rays, responsible for GRB 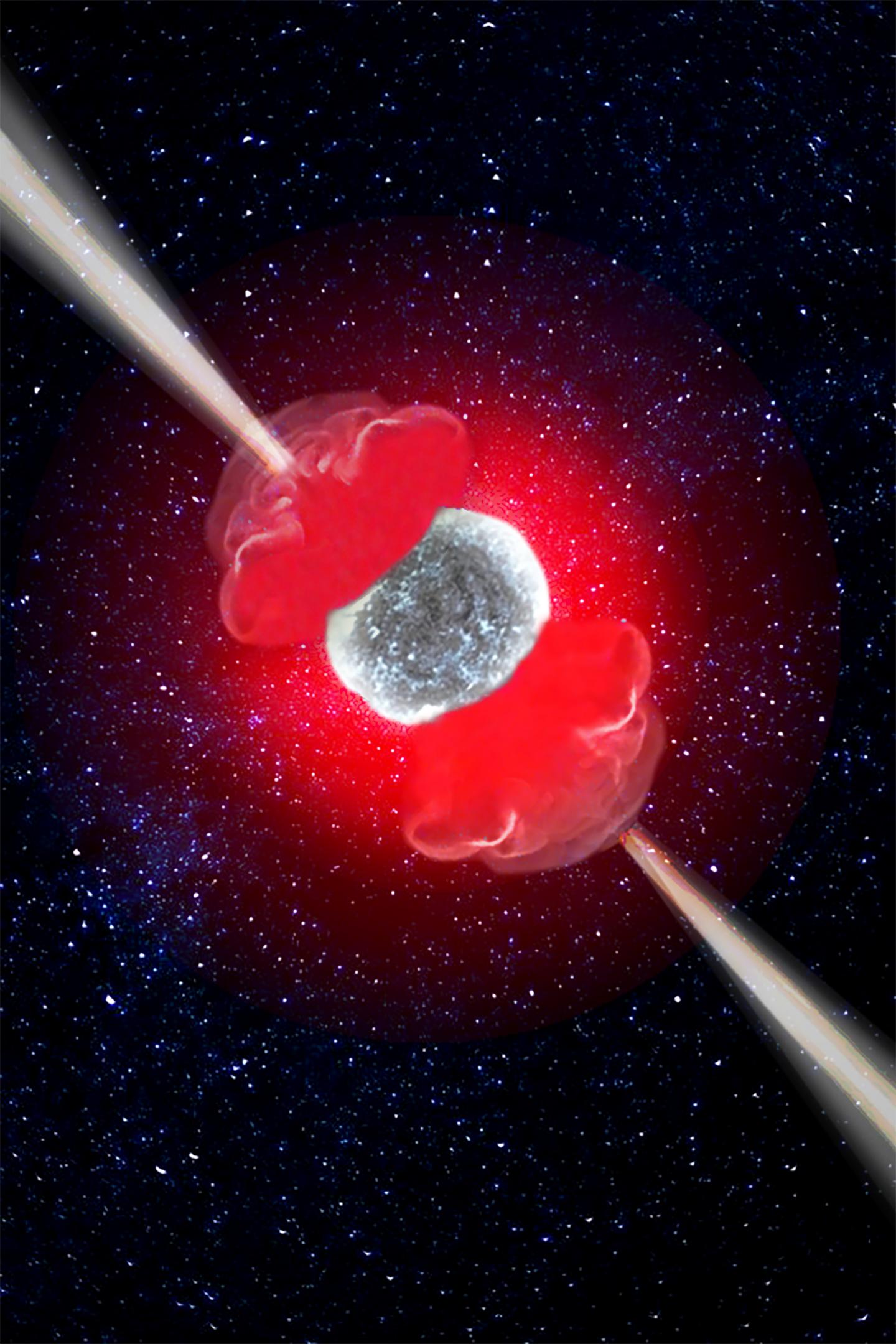 Observations of supernova SN2017iuk taken shortly after its onset showed it expanding rapidly, at one third of the speed of light. This is the fastest supernova expansion measured to date. Monitoring of the outflow over many weeks revealed a clear difference between the initial chemical composition and that at later times.

Taken together, these are indicators of the presence of the much theorised hot cocoon, filling a gap in our knowledge of how a jet of material escaping a star interacts with the stellar envelope around it and providing a potential link between two previously distinct classes of supernovae.

The supernova signals the final demise of a massive star, in which the stellar core collapses and the outer layers are violently blown off. SN2017iuk belongs to a class of extreme supernovae, sometimes called hypernovae or GRB-SNe, that accompany a yet more dramatic event known as a gamma-ray burst (GRB).

At stellar death, a highly relativistic, narrow beam of material can be ejected from the poles of the star which glows brightly first in gamma radiation and then across the entire electromagnetic spectrum and is known as a GRB.

This is an image of the explosion obtained by the Gran Telescopio Canarias in the period of maximum brightness of the event.

Until now, astronomers have been unable to study the earliest moments in the development of a supernova of this kind (a GRB-SN), but SN2017iuk was fortuitously close-by - at roughly 500 million light years from Earth - and the GRB light was underluminous, allowing the SN itself to be detectable at early times.

Dr Rhaana Starling, Associate Professor in the University of Leicester's Department of Physics and Astronomy said: "This immediately looked like an event worth chasing, as it happened in a grand-design spiral galaxy at very close proximity, cosmologically speaking.

"When the first sets of data came in there was an unusual component to the light that looked very blue, prompting a monitoring campaign to see if we could determine its origin by following the evolution and taking detailed spectra.

"The gamma-ray burst itself looked quite weak, so we could see other processes that were going on around the newly-formed jet which are normally drowned out. The idea of a cocoon of thermalised gas created by the relativistic jet as it drills out of the star had been proposed and implied in other cases, but here was the evidence that we needed to pin down the existence of such a structure."

A coordinated approach using a suite of space- and ground-based observatories was required to monitor the supernova over 30 days and at many wavelengths. The event was first detected using the Neil Gehrels Swift Observatory. Swift is a NASA space mission in which the University of Leicester is one of three partners, and hosts its UK data centre.

Data obtained with the Gravitational-wave Optical Transient Observatory (GOTO) helped to track the supernova light, while spectroscopy was obtained through dedicated observing programmes including initiatives by the STARGATE Collaboration headed up by Professor Nial Tanvir at the University of Leicester, which uses 8-m telescopes at the European Southern Observatory.

Professor Tanvir, Lecturer in Physics and Astronomy at the University of Leicester said: "The relativistic jet punches out through the star as if it was a bullet being fired out from the inside of an apple. What we've seen for the first time is all the apply debris that explodes out after the bullet."

Speeds of up to 115,000 kilometres per second were measured for the expanding supernova for approximately one hour after its onset. A different chemical composition was found for the early expanding supernova when compared with the more iron-rich later ejecta. The team concluded that just hours after the onset the ejecta is coming from the interior, from a hot cocoon created by the jet.

Existing supernova production models proved insufficient to account for the large amount of high velocity material measured. The team developed new models which incorporated the cocoon component and found these were an excellent match.

SN2017iuk also provides a long-sought link between the supernova that accompany GRBs, and those that do not: in lone supernovae, high speed outflows have also been seen, with velocities reaching 50,000 kilometres per second, which can originate in the same cocoon scenario but escape of the relativistic GRB jet is somehow thwarted.

Core-collapse supernovae without GRBs are usually found much later after their onset, giving scientists very little chance of detecting any signatures of a hot cocoon, whilst cocoon features in GRB-associated supernovae are usually hidden by the bright, relativistic jet.

The rare case of SN2017iuk has opened a window onto the earliest stages of this type of supernova phenomenon, allowing the elusive cocoon structure to be observed


THE STORY OF THE EVENT

On December 5, 2017, GRB 171205A was detected in a galaxy located 500 million light years from Earth. However far this may seem, this makes it the fourth closest long GRB ever observed. "Such events occur on average every ten years, so we immediately started an intense observing campaign to observe the emerging hypernova from the very early phases on - says Christina Thöne, researcher at the Institute of Astrophysics of Andalusia (IAA-CSIC) who participated in the discovery -. In fact, with our early observations we managed to obtain the earliest detection of a hypernova to date, less than one day after the collapse of the star".

And indeed, very early on the first features of a hypernova were detected with the Gran Telescopio Canarias, on the island of La Palma. "This was only possible because the luminosity of the jet was much weaker than usual, as typically the jets outshine the hypernova during the first week - says Antonio de Ugarte Postigo, researcher at the Institute of Astrophysics of Andalusia (IAA-CSIC) who participated in the paper -. What we saw, however, was a very peculiar component, which showed unprecedented expansion velocities and chemical abundances that were different to the ones seen in similar events".

This peculiar chemical composition and the high expansion velocities matched the expectations for the existence of a cocoon accompanying the jet at the surface of the star. This had been predicted but had been never observed before. The cocoon observed during the first days dragged material out from the interior of the star, and its chemical composition was determined in this study. After a few days, this component faded away, and the hypernova evolved in a similar way as the ones previously observed.

The total energy emitted by the cocoon during these first days was larger than that of the GRB, implying that the jet transferred a large part of its energy to the cocoon. However, it also indicates that the energy of the GRB depends to some degree on the interaction between the jet and the stellar material, and on this new component, the cocoon. This discovery also implies that the models must be revised: "While in the standard model of supernovae the collapse of the nucleus leads to quasi-spherical explosions, the evidence of such an energetic emission produced by the cocoon suggests that the jet plays an important role in core-collapse supernovae which means we will need to consider it in supernova explosion models", concludes Izzo (IAA-CSIC).