Scientists have charted the environment surrounding a stellar-mass black hole that is 10 times the mass of the Sun using NASA’s Neutron star Interior Composition Explorer (NICER) payload aboard the International Space Station. NICER detected X-ray light from the recently discovered black hole, called MAXI J1820+070 (J1820 for short), as it consumed material from a companion star. Waves of X-rays formed “light echoes” that reflected off the swirling gas near the black hole and revealed changes in the environment’s size and shape.

“NICER has allowed us to measure light echoes closer to a stellar-mass black hole than ever before,” said Erin Kara, an astrophysicist at the University of Maryland, College Park and NASA’s Goddard Space Flight Center in Greenbelt, Maryland, who presented the findings at the 233rd American Astronomical Society meeting in Seattle. “Previously, these light echoes off the inner accretion disk were only seen in supermassive black holes, which are millions to billions of solar masses and undergo changes slowly. Stellar black holes like J1820 have much lower masses and evolve much faster, so we can see changes play out on human time scales.”

A paper describing the findings, led by Kara, appeared in the Jan. 10 issue of Nature and is available online.

J1820 is located about 10,000 light-years away toward the constellation Leo. The companion star in the system was identified in a survey by ESA’s (European Space Agency) Gaia mission, which allowed researchers to estimate its distance. Astronomers were unaware of the black hole’s presence until March 11, 2018, when an outburst was spotted by the Japan Aerospace Exploration Agency’s Monitor of All-sky X-ray Image (MAXI), also aboard the space station. J1820 went from a totally unknown black hole to one of the brightest sources in the X-ray sky over a few days. NICER moved quickly to capture this dramatic transition and continues to follow the fading tail of the eruption.

A black hole can siphon gas from a nearby companion star into a ring of material called an accretion disk. Gravitational and magnetic forces heat the disk to millions of degrees, making it hot enough to produce X-rays at the inner parts of the disk, near the black hole. Outbursts occur when an instability in the disk causes a flood of gas to move inward, toward the black hole, like an avalanche. The causes of disk instabilities are poorly understood.

Above the disk is the corona, a region of subatomic particles around 1 billion degrees Celsius (1.8 billion degrees Fahrenheit) that glows in higher-energy X-rays. Many mysteries remain about the origin and evolution of the corona. Some theories suggest the structure could represent an early form of the high-speed particle jets these types of systems often emit.

Astrophysicists want to better understand how the inner edge of the accretion disk and the corona above it change in size and shape as a black hole accretes material from its companion star. If they can understand how and why these changes occur in stellar-mass black holes over a period of weeks, scientists could shed light on how supermassive black holes evolve over millions of years and how they affect the galaxies in which they reside.

One method used to chart those changes is called X-ray reverberation mapping, which uses X-ray reflections in much the same way sonar uses sound waves to map undersea terrain. Some X-rays from the corona travel straight toward us, while others light up the disk and reflect back at different energies and angles.

As they examined NICER’s observations of J1820, Kara’s team saw a decrease in the delay, or lag time, between the initial flare of X-rays coming directly from the corona and the flare’s echo off the disk, indicating that the X-rays traveled shorter and shorter distances before they were reflected. From 10,000 light-years away, they estimated that the corona contracted vertically from roughly 100 to 10 miles — that’s like seeing something the size of a blueberry shrink to something the size of a poppy seed at the distance of Pluto.

“This is the first time that we’ve seen this kind of evidence that it’s the corona shrinking during this particular phase of outburst evolution,” said co-author Jack Steiner, an astrophysicist at the Massachusetts Institute of Technology’s Kavli Institute for Astrophysics and Space Research in Cambridge. “The corona is still pretty mysterious, and we still have a loose understanding of what it is. But we now have evidence that the thing that’s evolving in the system is the structure of the corona itself.”

To confirm the decreased lag time was due to a change in the corona and not the disk, the researchers used a signal called the iron K line created when X-rays from the corona collide with iron atoms in the disk, causing them to fluoresce. Time runs slower in stronger gravitational fields and at higher velocities, as stated in Einstein’s theory of relativity. When the iron atoms closest to the black hole are bombarded by light from the core of the corona, the X-ray wavelengths they emit get stretched because time is moving slower for them than for the observer (in this case, NICER).

These observations give scientists new insights into how material funnels in to the black hole and how energy is released in this process.

The NICER instrument installed on the International Space Station, as captured by a high-definition external camera on Oct. 22, 2018. 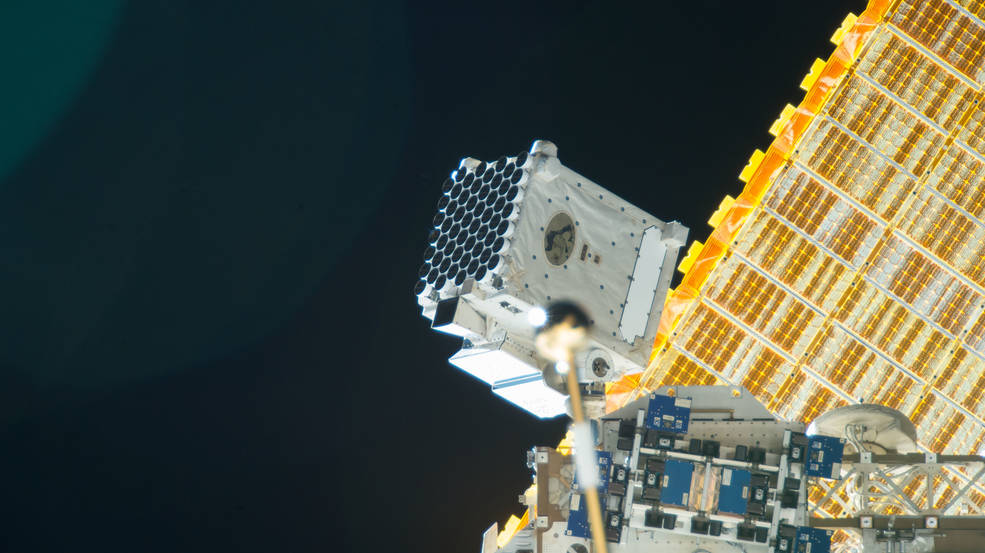 “NICER’s observations of J1820 have taught us something new about stellar-mass black holes and about how we might use them as analogs for studying supermassive black holes and their effects on galaxy formation,” said co-author Philip Uttley, an astrophysicist at the University of Amsterdam. “We’ve seen four similar events in NICER’s first year, and it’s remarkable. It feels like we’re on the edge of a huge breakthrough in X-ray astronomy.”

Banner image: In this illustration of a newly discovered black hole named MAXI J1820+070, a black hole pulls material off a neighboring star and into an accretion disk. Above the disk is a region of subatomic particles called the corona. Credit: Aurore Simonnet and NASA’s Goddard Space Flight Center