For the first time ever, astronomers have detected a 1.3 km radius body at the edge of the Solar System. Kilometer sized bodies like the one discovered have been predicted to exist for more than 70 years. These objects acted as an important step in the planet formation process between small initial amalgamations of dust and ice and the planets we see today.

This is an artist's impression of the newly discovered object. 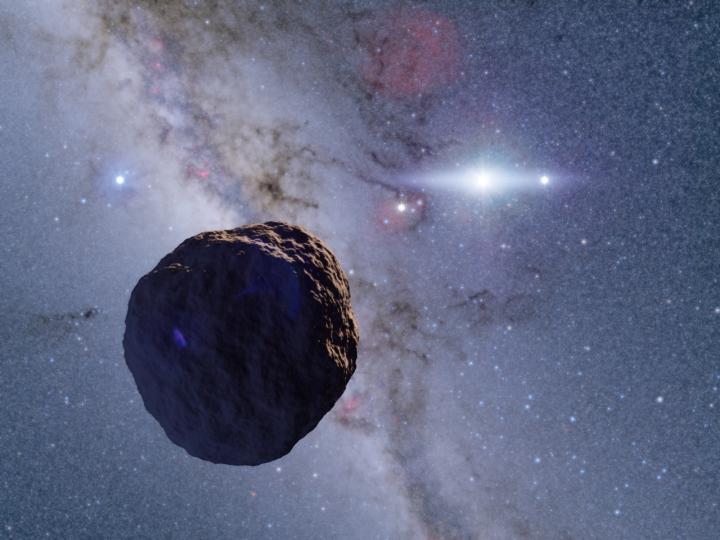 Edgeworth-Kuiper Belt Objects with radii from 1 kilometer to several kilometers have been predicted to exist, but they are too distant, small, and dim for even world-leading telescopes, like the Subaru Telescope, to observe directly. So a research team led by Ko Arimatsu at the National Astronomical Observatory of Japan used a technique known as occultation: monitoring a large number of stars and watching for the shadow of an object passing in front of one of the stars. The OASES (Organized Autotelescopes for Serendipitous Event Survey) team placed two small (28 cm) telescopes on the roof of the Miyako open-air school on Miyako Island, Miyakojima-shi, Okinawa Prefecture, Japan, and monitored approximately 2000 stars for a total of 60 hours.

Analyzing the data, the team found an event consistent with a star appearing to dim as it is occulted by a 1.3 km radius Edgeworth-Kuiper Belt Object. This detection indicates that kilometer sized Edgeworth-Kuiper Belt Objects are more numerous than previously thought. This supports models where planetesimals first grow slowly into kilometer sized objects before runaway growth causes them to merge into planets.

Arimatsu explains, "This is a real victory for little projects. Our team had less than 0.3% of the budget of large international projects. We didn't even have enough money to build a second dome to protect our second telescope! Yet we still managed to make a discovery that is impossible for the big projects. Now that we know our system works, we will investigate the Edgeworth-Kuiper Belt in more detail. We also have our sights set on the still undiscovered Oort Cloud out beyond that."

This research was made possible by the support of the Miyako open-air school and the local community in Miyakojima-shi.