Meet The Quantum Refrigerator, It's 3 Atoms In Size

This quantum fridge won't keep your drinks cold, but it's cool proof of physics operating at the smallest scales. The work is described in a paper published 14 January in Nature Communications.

Researchers have built tiny 'heat engines' before, but quantum fridges existed only as proposals until the team at the Centre for Quantum Technologies at the National University of Singapore chilled with their atoms.

The device is an "absorption refrigerator". It works without moving parts, using heat to drive a cooling process.

Researchers have built a fridge that's just three atoms big at the Centre for Quantum Technologies at the National University of Singapore. The rest of the equipment visible in this picture, with co-authors Jaren Gan (left) and Gleb Maslennikov (right), controls the atoms to make the fridge work. 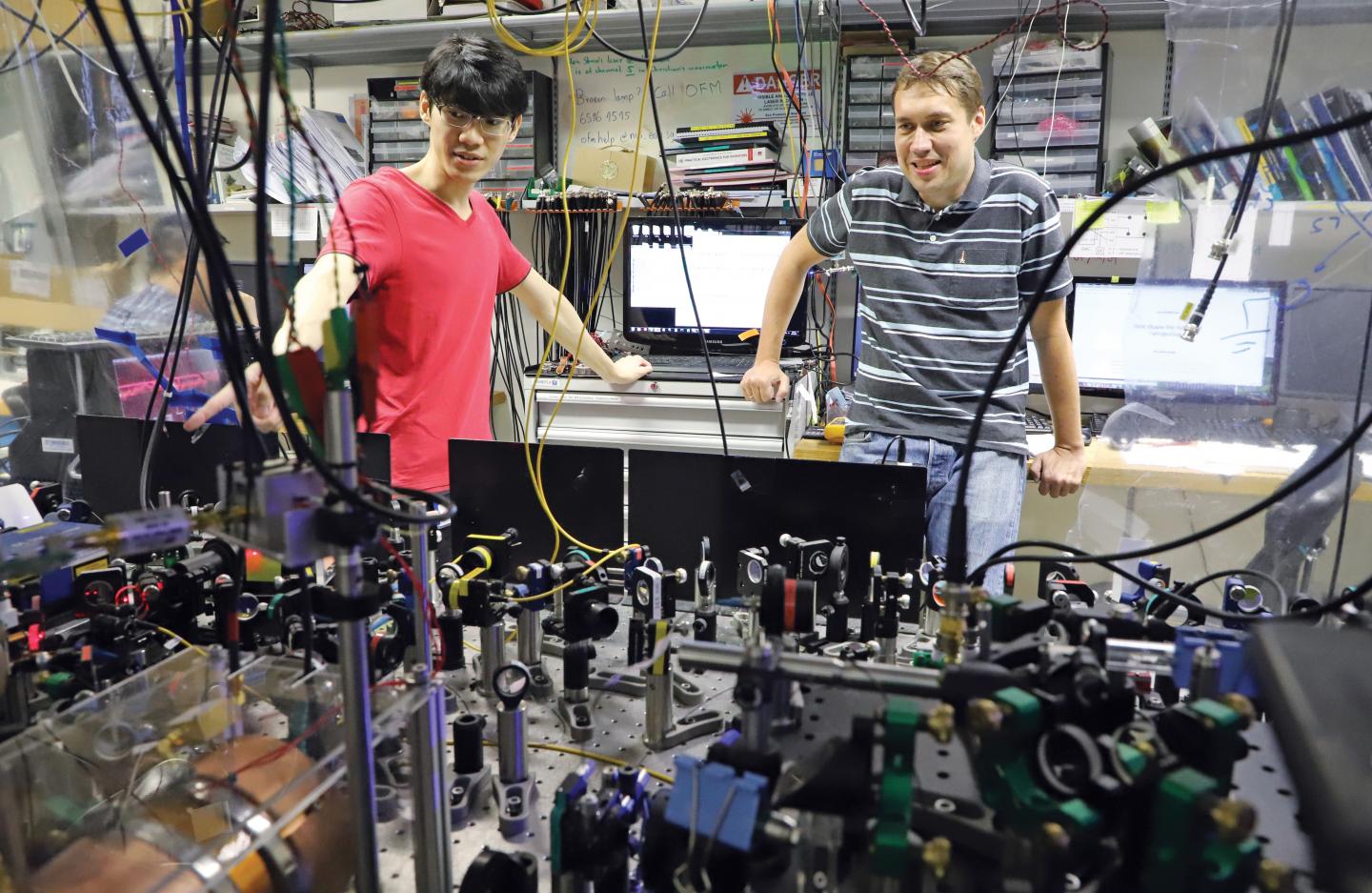 The first absorption refrigerators, introduced in the 1850s, cycled the evaporation and absorption of a liquid, with cooling happening during the evaporation stage. They were widely used to make ice and chill food into the 20th Century. Albert Einstein even held a patent on an improved design.

Today's fridges and air conditioners more often use a compressor, but absorption refrigerators still have their uses - science experiments included.

"Our device is the first implementation of the absorption refrigeration cycle on the nanoscale," says co-author Stefan Nimmrichter.

To create an absorption fridge with just three atoms took exquisite control. "As an experimental scientist, it's a pure joy to be able to manipulate individual atoms," says Gleb Maslennikov, the paper's first author.

First, the researchers caught and held three atoms of the element Ytterbium in a metal chamber from which they'd removed all the air. They also pulled one electron off each atom to leave them with a positive charge.

The charged atoms - called ions - can then be held in place with electric fields. Meanwhile, the researchers nudge and zap the ions with lasers to bring them into their lowest energy state of motion. The result is that the ions are suspended almost perfectly still, strung out in a line.

Another laser zap then injects some heat, making the ions wiggle about. The ions interact with each other because of their like charges. The result is three patterns of wiggle - squishing and stretching along the line, like a slinky, rocking like a seesaw pivoting about the central atom, and zig-zagging out from the line like a waving skipping rope.

The energy in each wiggling mode is quantized, with the energy carried by a number of 'phonons'. By tuning the wiggling frequencies, the researchers set up conditions for refrigeration: making it such that a phonon moving from the see-saw to the slinky mode will drag a phonon from the zig-zag mode with it. The zig-zag mode thus loses energy, and its temperature drops. At its coldest, it is within 40 microKelvin of absolute zero (-273C), the coldest temperature possible. Each round of preparing the ions and counting phonons took up to 70 milliseconds, with cooling happening for around 1ms. This process was repeated thousands of times.

Studying such small devices is important to see how thermodynamics - our best understanding of heat flows - may need tweaking to reflect more fundamental laws. The principles of thermodynamics are based on the average behaviours of big systems. They don't take quantum effects into account, which matters for scientists building nanomachines and quantum devices.

To test quantum thermodynamics, the researchers made careful measurements of how phonons spread through the modes over time.

In particular, the researchers tested whether a quantum effect known as 'squeezing' would boost the quantum fridge's performance.

Squeezing means the team fixed more precisely the position of the ions. Because of the quantum uncertainty principle, that increases the fluctuation in momentum. In turn, this boosts the average number of phonons in the see-saw mode that drives the cooling.

To the team's surprise, squeezing didn't help the fridge. "If you have a finite amount of energy to spend, it's better to turn it directly into heat than use it preparing a squeezed state," says Dzmitry Matsukevich, who led the experimental work.

However, they find the maximum amount of cooling, achieved with a method dubbed 'single shot', exceeds what classical equilibrium thermodynamics predicts. In this approach, the team stop the refrigeration effect by de-tuning the wiggling modes before it reaches its natural endpoint. The cooling overshoots the equilibrium.

Physicist Valerio Scarani, another member of the team, is looking forward to taking things further. "The next question is, can you cool what you want with it? So far, we have the engine of the fridge, but not the box for the beer," he says.

This research is supported by the Singapore Ministry of Education through the Academic Research Fund Tier 2 (Grant No. MOE2016-T2-1-141) and Tier 3 (Grant No. MOE2012-T3-1-009); by the National Research Foundation, Prime Minister's Office, Singapore, through the Competitive Research Programme (Award No. NRF-CRP12-2013-03); and by both above-mentioned sources, under the Research Centres of Excellence programme.