Long-Necked Dinosaurs Rotated Their Forefeet to the Side

Long-necked dinosaurs (sauropods) could orient their forefeet both forward and sideways. The orientation of their feet depended on the speed and center of mass of the animals. An international team of researchers investigated numerous dinosaur footprints in Morocco at the foot of the Atlas Mountains using state-of-the-art methods. By comparing them with other sauropods tracks, the scientists determined how the long-necked animals moved forward. The results have now been published in the Journal of Vertebrate Paleontology.

These are well preserved footprints of the find site in Morocco, with clearly visible claw impressions. 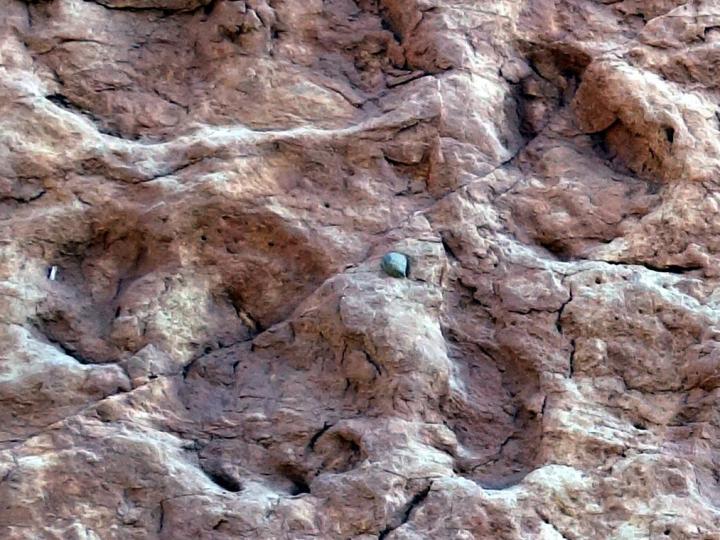 Credit: ©  The Society of Vertebrate Paleontology

"Long-necked dinosaurs" (sauropods) were among the most successful herbivores of the Mesozoic Era - the age of the dinosaurs. Characteristic for this group were a barrel-shaped body on columnar legs as well as an extremely long neck, which ended in a relatively small head. Long-necked dinosaurs existed from about 210 to 66 million years ago - they thus had been able to assert themselves on earth for a very long period. Also their gigantism, with which they far surpassed other dinosaurs, points at their success.

Sauropods included the largest land animals in Earth history, some over 30 metres long and up to 70 tonnes in weight. "However, it is still unclear how exactly these giants moved," says Jens Lallensack, paleontologist at the Institute of Geosciences and Meteorology at the University of Bonn in Germany. The limb joints were partly cartilaginous and therefore not fossilised, allowing only limited conclusions about the range of movement.

This is the complete surface of the track site in Morocco, which is 54 meters in length and contains hundreds of footprints.

Credit: © The Society of Vertebrate Paleontology

The missing pieces of the puzzle, however, can be reconstructed with the help of fossil footprints of the giants. An international team of researchers from Japan, Morocco and Germany, led by the University of Bonn, has now investigated an unique track site in Morocco at the foot of the Atlas Mountains. The site consists of a surface of 54 x 6 metres which was vertically positioned during mountain formation and shows hundreds of individual footprints, some of which overlap. A part of these footprints could be assigned to a total of nine trackways (sequences of individual footprints). "Working out individual tracks from this jumbled mess of footprints was detective work and only possible through the analysis of high-resolution 3D models on the computer," says Dr. Oliver Wings of the Zentralmagazin Naturwissenschaftlicher Sammlungen der Martin-Luther-Universität Halle-Wittenberg in Germany.

The researchers were amazed by the results: the trackways are extremely narrow - the right and left footprints are almost in line. Also, the forefoot impressions are not directed forwards, as is typical for sauropod tracks, but point to the side, and sometimes even obliquely backwards. Even more: The animals were able to switch between both orientations as needed. "People are able to turn their palms downwards by crossing the ulna and radius," says Dr. Michael Buchwitz of the Museum für Naturkunde Magdeburg. However, this complicated movement is limited to mammals and chameleons in today's terrestrial vertebrates. It was not possible in other animals, including dinosaurs. Sauropods must therefore have found another way of turning the forefoot forwards.

How can the rotation of the forefoot be explained?

How can the rotation of the forefoot in the sauropod tracks be explained? The key probably lies in the mighty cartilage layers, which allowed great flexibility in the joints, especially in the shoulder. But why were the hands rotated outwards at all? "Outwardly facing hands with opposing palms were the original condition in the bipedal ancestors of the sauropods," explains Shinobu Ishigaki of the Okayama University of Science, Japan. The question should therefore be why most sauropods turned their forefeet forwards - an anatomically difficult movement to implement.

3D model as depth color image, below: Interpretation of the footprints. 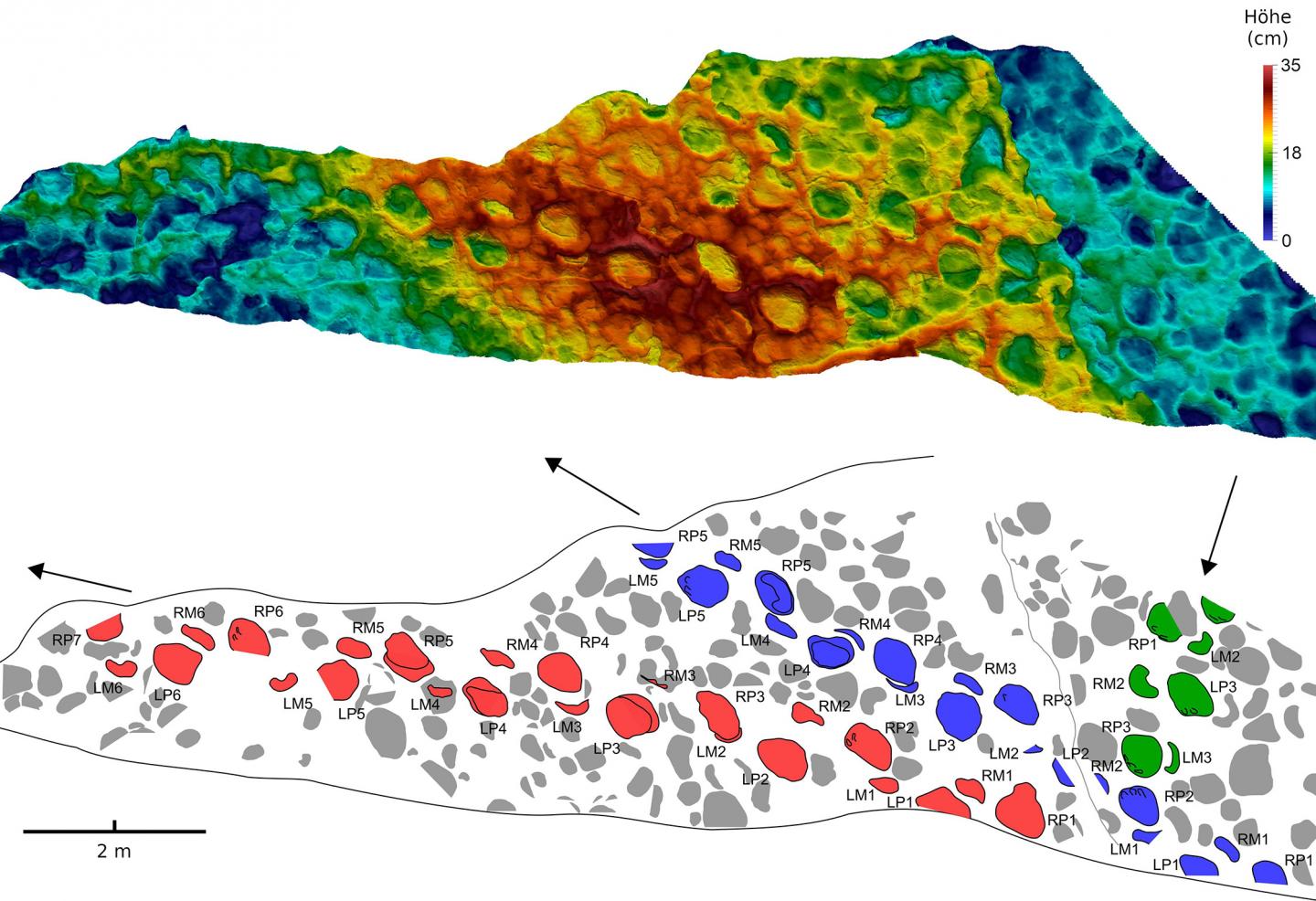 Credit: ©  The Society of Vertebrate Paleontology

A statistical analysis of sauropod tracks from all over the world could provide important clues: Apparently the animals tended to have outwardly directed forefeet when the foreleg was not used for active locomotion but only for carrying body weight. Thus the forefeet were often rotated further outwards when the animal moved slowly and the centre of mass of the body was far back. Only if the hands were also used for the forward drive, a forefoot directed to the front was advantageous. The analysis furthermore showed that the outer rotation of the forefeet was limited to smaller individuals, whereas in larger animals they were mostly directed forward. The large animals apparently could no longer rotate their forefeet sideways. "This loss of mobility was probably a direct result of their gigantism," says Lallensack.