An African penguin (Spheniscus demersus) on a beach in South Africa. A new study examines why biodiversity among warm-blooded marine predators such as whales, seals and penguins rises in cold, temperate waters. 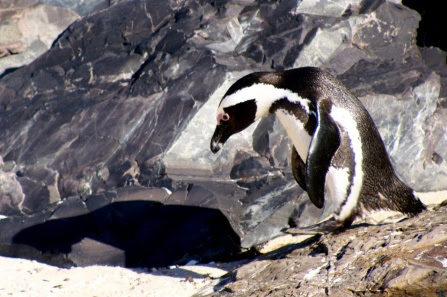 A new paper in Science explores a curious trend: why biodiversity among marine mammals and birds generally rises in cold, temperate waters

In ecology, the diversity of species generally increases as you move toward the warmer latitudes of the tropics.

A new study explores a curious exception to this trend, examining why biodiversity rises in cold, temperate waters among warm-blooded marine predators such as whales, seals and penguins.

The research — published on Jan. 25 in the journal Science — presents a possible explanation for this unusual pattern.

“We show with data and theory that cold waters slow fishes’ and sharks’ metabolism, causing sluggish movement and giving mammals and birds important hunting and competitive advantages,” says John Grady, a postdoctoral research associate at the National Great Rivers Research and Education Center and former postdoctoral researcher at Michigan State University, who led the study. “Sharks are easier to avoid and fish are easier to catch when the water is cold.”

“As we conclude in the paper, ‘Overall, warm-bodied predators are favored where prey are slow, stupid and cold,’” says co-author Adam Wilson, PhD, a biogeographer at the University at Buffalo. Wilson is an assistant professor in the Department of Geography in the UB College of Arts and Sciences.

“We are living through an era of rapid environmental change and biodiversity loss,” Wilson adds. “Understanding the mechanisms that led to the current spatial distribution of biodiversity is critical to conserving it for future generations.”

A humpback whale (Megaptera novaeangliae) pictured in Cape Cod Bay off the coast of Massachusetts in the United States.


As part of the study, Wilson co-developed a workflow that the team used to quantify and summarize the geographic distribution of almost 1,000 species of sharks, fish, reptiles, mammals and birds.

“We used these data to show how warm-blooded marine predators such as seals, whales and penguins do not follow the typical geographic pattern of increasing biodiversity near the tropics. Our analysis showed that the diversity of these predators systematically increases toward the poles relative to cold-blooded competitors such as large sharks and fish,” Wilson says. “This curious fact led to the development of the theory presented in the paper, which explains the patterns of biodiversity by taking into account the relative speed at which predators pursue their prey in different water temperatures.”

Scientists found evidence to support this hypothesis when they examined consumption patterns among warm-blooded seals and active-hunting cetaceans (including dolphins, porpoises, beluga and narwhal).

“Analyzing global patterns of marine mammal abundance and consumption, we find seals and dolphins collectively consume approximately 80 times more of the available food near the polar seas than the warm equator,” Grady says.

This may help to explain why these warm-blooded predators are more abundant and diverse in cold seas, Grady adds. 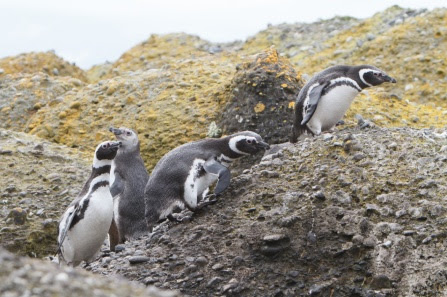 
Grady and Wilson both point out that the new study explores problems of environmental and economic importance.

One implication of the research is that as oceans warm, the “balance of power” may shift toward sharks and fish, at the expense of mammal and bird populations, Grady says.

“Large predatory mammals, birds, fish and sharks are major regulators of marine ecosystems and support ecotourism industries,” he says. “Their spatial diversity has important economic and conservation implications. As water temperatures warm, marine mammal and bird population will face significant challenges. We found, for example, that for every 1 degree Celsius increase in water temperature, seal abundance declined by 24 percent.”