How Sponges Undermine Coral Reefs from Within

Coral reefs are demolished from within, by bio-eroding sponges. Seeking refuge from predators, these sponges bore tunnels into the carbonate coral structures, thus weakening the reefs. Scientists from the Royal NIOZ Netherlands Institute for Sea Research have uncovered how the sponges hollow out and take over reef skeletons. This finding, published in Scientific Reports on Thursday January 24th, helps to explain why sponges erode reefs faster as atmospheric CO2 levels rise. 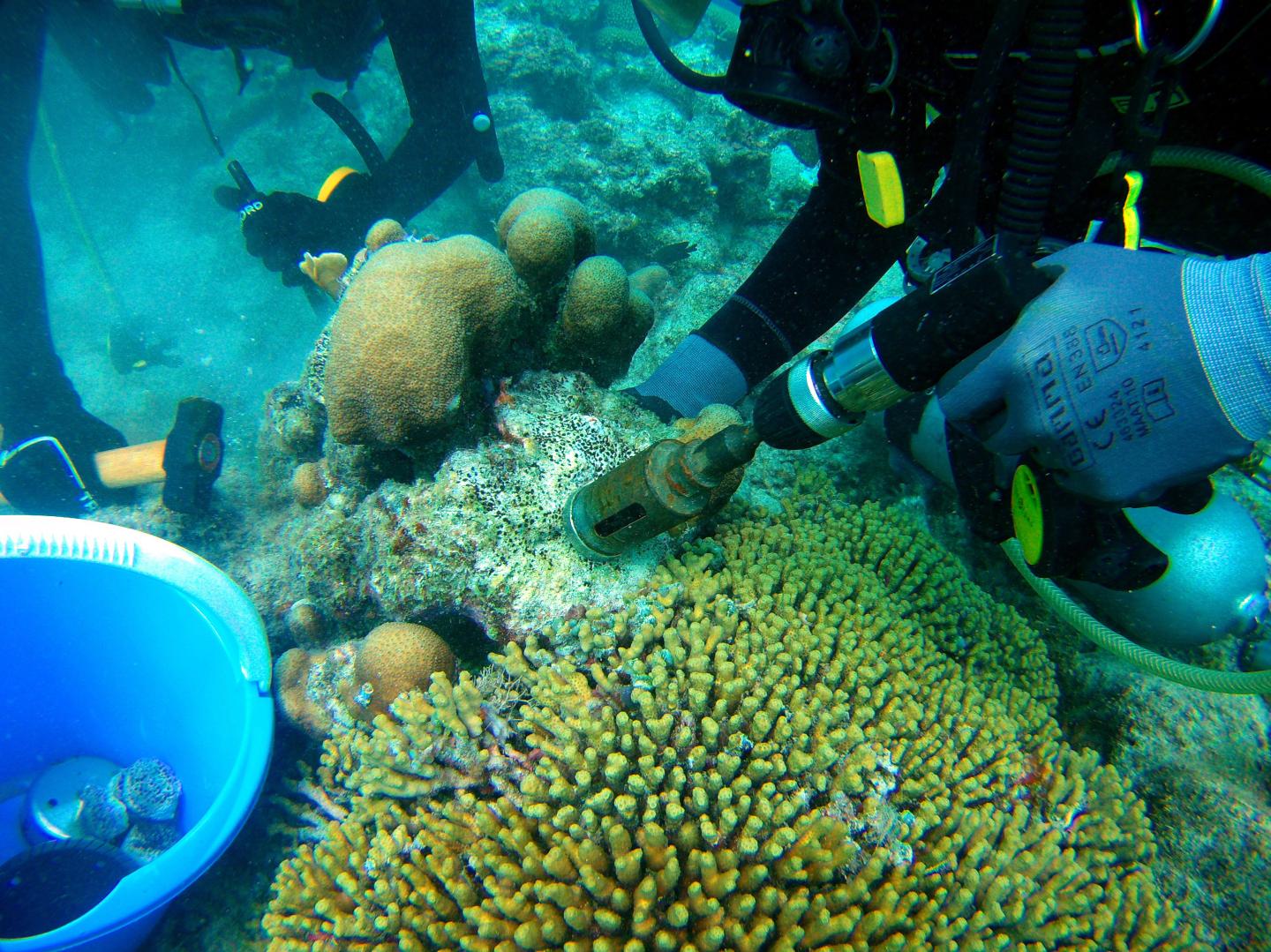 Credit: Alice Webb
With their three-dimensional structures, coral reefs provide ecosystem building blocks, hotspots for living organisms and natural coastal protection against waves. Worldwide, coral reefs are under pressure of the consequences of climate change, such as ocean acidification. NIOZ-first author Alice Webb explains why and how sponges contribute to the collapse of coral reefs.

Why and how do sponges excavate coral reefs?

An affected coral reef may seem intact on the outside, while on the inside looking like a complex of mining shafts with galleries and cavities that are completely filled with sponge tissue.

Bio-eroding sponges bore into coral skeletons, not to feed on the calcium carbonate, but to protect their own tissue from predators by hiding in the hard coral structure. To make the tunnels, they use a combination of chemical and mechanical demolition techniques. 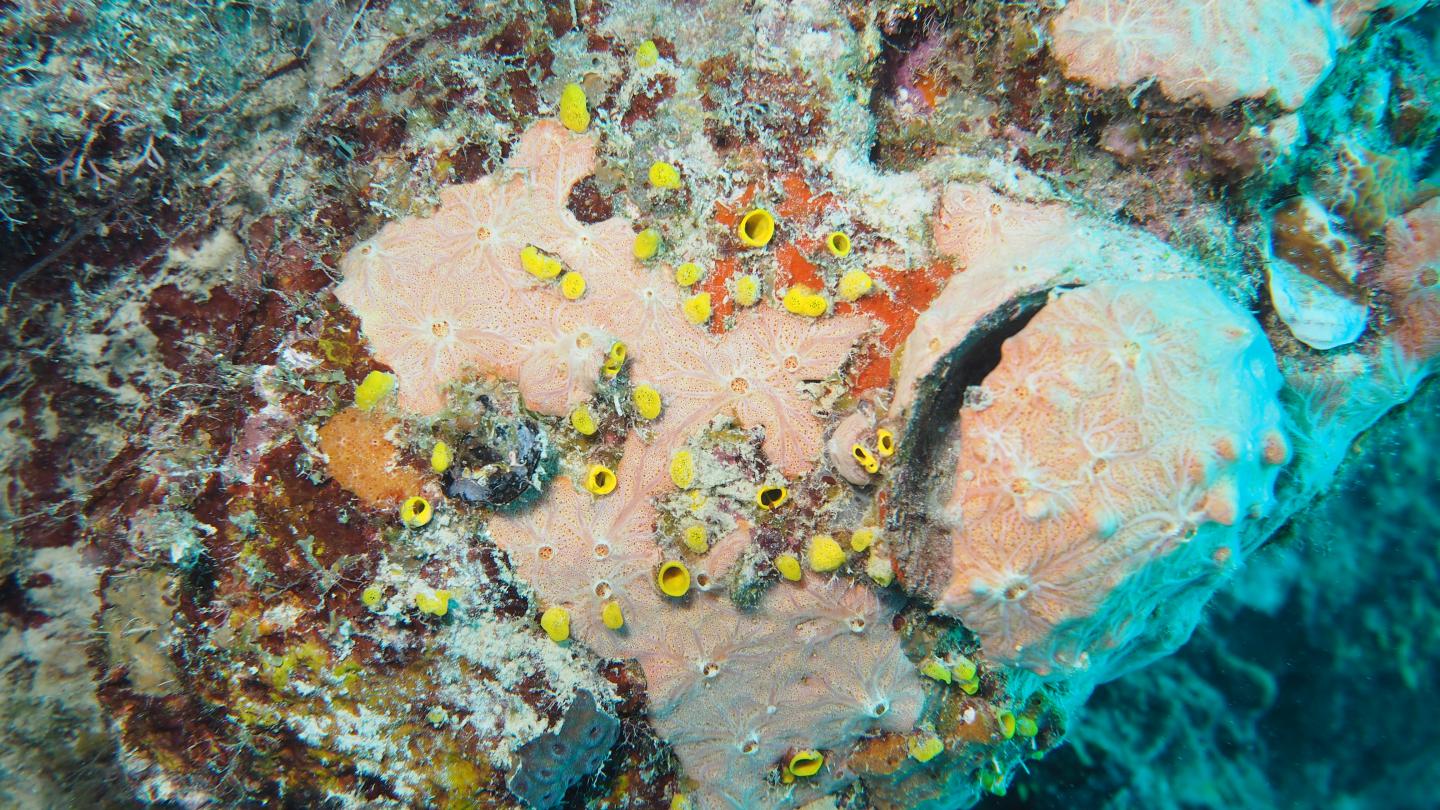 First the sponge pumps acidified fluid onto the coral to dissolve and chip off calcium carbonate pieces; then it removes the chips from the boring pit by contracting its tissue, resembling smooth muscle tissue. Sponges filter huge amounts of water constantly for feeding and breathing. They suck in water, take all the food particles and then spit the filtered water out. Chips of coral reef are expelled by the same route through these filtering canals, and out of the sponge through the so-called osculum.

How does ocean acidification help sponges break down coral?

We knew from previous research that bio-erosion is facilitated by higher CO2 levels, but we didn't know why. Bio-eroding sponges alter the chemical composition of the water at the etching interface by pumping protons from the surrounding seawater into this interface. By doing so, they make the surface of the skeleton more acidic, which helps to dissolve the skeleton. If more CO2 is dissolved in the seawater, the proton concentration rises and the sponge will simply have to spend less energy on lowering the pH at the sponge/coral interface.

Why was the breaking-down mechanism still unknown?

The sponge-coral interface is extremely hard to localise and observe as it is surrounded by layers of coral skeleton. Research on boring mechanisms of bio-eroding sponges really started in the 1970s, but the technology to look at differences in pH was not available. In the last decade, researchers have tried to localise the etching site using microelectrodes (pH probes) but this approach did not succeed. We combined a number of 'tricks' to open up the sponge-carbonate boundary. We grew sponges on small pieces of calcite minerals that we could manipulate to observe the sponge-carbonate interface directly. The actual observation was done using fluorescence microscopy by visualising pH (acid) and the way the pH was controlled by the sponge.

What are the implications of your findings?

These sponges are abundant on reefs of the Caribbean such as Curacao, Saba bank or Florida keys, but also on the Great Barrier Reef. Taking ocean acidification into account, our sponge findings make it possible to make better predictions of future coral reef conditions.