Climate Change Tipping Point Could Be Coming Sooner than We Think

Global carbon emissions reached a record high in 2018, rising by an estimated 3.4 percent in the U.S. alone. This trend is making scientists, government officials, and industry leaders more anxious than ever about the future of our planet. As United Nations Secretary General António Guterres said at the opening of the 24th annual U.N. climate conference on December 3, “We are in deep trouble with climate change.”

A Columbia Engineering study, published today in Nature, confirms the urgency to tackle climate change. While it’s known that extreme weather events can affect the year-to-year variability in carbon uptake, and some researchers have suggested that there may be longer-term effects, this new study is the first to actually quantify the effects through the 21st century and demonstrates that wetter-than-normal years do not compensate for losses in carbon uptake during dryer-than-normal years, caused by events such as droughts or heatwaves.

Anthropogenic emissions of CO2—emissions caused by human activities—are increasing the concentration of CO2 in the Earth’s atmosphere and producing unnatural changes to the planet’s climate system. The effects of these emissions on global warming are only being partially abated by the land and ocean. Currently, the ocean and terrestrial biosphere (forests, savannas, etc.) are absorbing about 50% of these releases—explaining the bleaching of coral reefs and acidification of the ocean, as well as the increase of carbon storage in our forests.

“It is unclear, however, whether the land can continue to uptake anthropogenic emissions at the current rates,” says Pierre Gentine, associate professor of earth and environmental engineering and affiliated with the Earth Institute, who led the study. “Should the land reach a maximum carbon uptake rate, global warming could accelerate, with important consequences for people and the environment. This means that we all really need to act now to avoid greater consequences of climate change.”

Working with his PhD student Julia Green, Gentine wanted to understand how variability in the hydrological cycle (droughts and floods, and long-term drying trends) was affecting the capacity of the continents to trap some of the emissions of CO2. The research is particularly timely as climate scientists have predicted that extreme events will likely increase in frequency and intensity in the future, some of which we are already witnessing today, and that there will also be a change in rainfall patterns that will likely affect the ability of the Earth’s vegetation to uptake carbon.

To define the amount of carbon stored in vegetation and soil, Gentine and Green analyzed net biome productivity (NBP), defined by the Intergovernmental Panel on Climate Change as the net gain or loss of carbon from a region, equal to the net ecosystem production minus the carbon lost from disturbance like a forest fire or a forest harvest.

The researchers used data from four Earth System Models from the GLACE-CMIP5 (Global Land Atmosphere Coupling Experiment—Coupled Model Intercomparison Project) experiments, to run a series of experiments to isolate reductions in NBP that are due strictly to changes in soil moisture. They were able to isolate the effects of changes in long-term soil moisture trends (i.e., drying) as well as short-term variability (i.e., the effects of extreme events such as floods and droughts) on the ability of the land to uptake carbon.

“We saw that the value of NBP, in this instance a net gain of carbon on the land surface, would actually be almost twice as high if it weren't for these changes (variability and trend) in soil moisture,” says Green, the paper’s lead author. “This is a big deal! If soil moisture continues to reduce NBP at the current rate, and the rate of carbon uptake by the land starts to decrease by the middle of this century—as we found in the models—we could potentially see a large increase in the concentration of atmospheric CO2 and a corresponding rise in the effects of global warming and climate change.”

Gentine and Green note that soil-moisture variability notably reduces the present land carbon sink, and their results show that both variability and drying trends reduce it in the future. By quantifying the critical importance of soil-water variability for the terrestrial carbon cycle, and the reduction in carbon uptake due to the effects of these changes in soil moisture, the study findings highlight the necessity of implementing improved modeling of vegetation response to water stress and land–atmosphere coupling in Earth system models to constrain the future terrestrial carbon flux and to better predict future climate.

“Essentially, if there were no droughts and heat waves, if there were not going to be any long-term drying over the next century, then the continents would be able to store almost twice as much carbon as they do now,” says Gentine. “Because soil moisture plays such a large role in the carbon cycle, in the ability of the land to uptake carbon, it’s essential that processes related to its representation in models become a top research priority.”

Limpopo province in South Africa-- a semi-arid region shown to have reduced carbon uptake due to soil moisture anomalies. This negative trend is expected to continue through the 21st century. 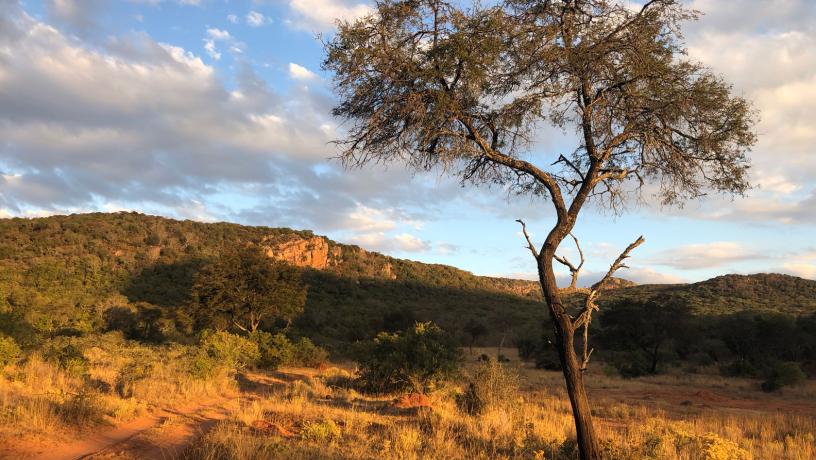 There is still a great deal of uncertainty on how plants respond to water stress, and so Green and Gentine will continue their work on improving representations of vegetation response to soil moisture changes. They are now focusing on the tropics, a region with lots of unknowns, and the largest terrestrial carbon sink, to determine how vegetation activity is being controlled by both changes in soil moisture as well as atmospheric dryness. These findings will provide guidance on improving the representation of plant water stress in the tropics.

"This study is highly valuable as it shines a bright spotlight on just how important water is for the uptake of carbon by the biosphere,” says Chris Schwalm, an associate scientist at Woods Hole Research Center and an expert in global environmental change, carbon cycle sensitivity and modeling frameworks who was not involved in the study. “It also exposes underdeveloped aspects of Earth system modeling such as processes related to vegetation water-stress and soil moisture, which can be targeted during model development for better predictive capacity in the context of global environmental change."