Astronomers have captured one of the most detailed views of a young star taken to date, and revealed an unexpected companion in orbit around it.

While observing the young star, astronomers led by Dr John Ilee from the University of Leeds discovered it was not in fact one star, but two.

The main object, referred to as MM 1a, is a young massive star surrounded by a rotating disc of gas and dust that was the focus of the scientists' original investigation.

This is an artists impression of the disc of dust and gas surrounding the massive protostar MM 1a, with its companion MM 1b forming in the outer regions. 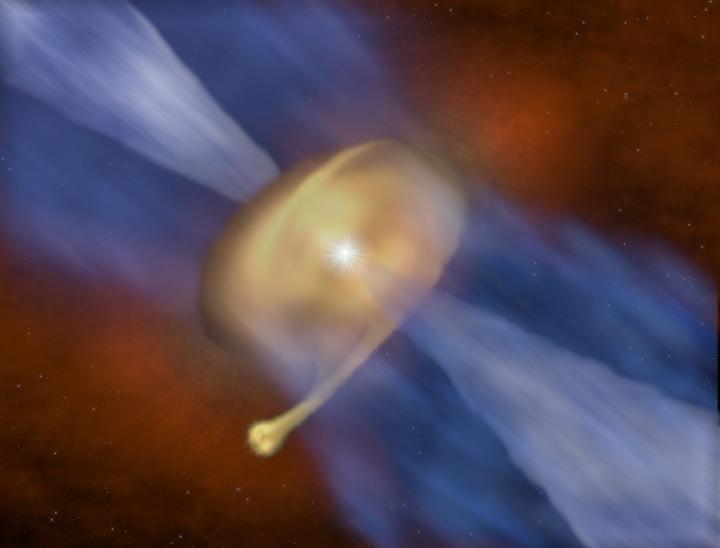 A faint object, MM 1b, was detected just beyond the disc in orbit around MM 1a. The team believe this is one of the first examples of a "fragmented" disc to be detected around a massive young star.

"Stars form within large clouds of gas and dust in interstellar space," said Dr Ilee, from the School of Physics and Astronomy at Leeds.

"When these clouds collapse under gravity, they begin to rotate faster, forming a disc around them. In low mass stars like our Sun, it is in these discs that planets can form."

"In this case, the star and disc we have observed is so massive that, rather than witnessing a planet forming in the disc, we are seeing another star being born."

By measuring the amount of radiation emitted by the dust, and subtle shifts in the frequency of light emitted by the gas, the researchers were able to calculate the mass of MM 1a and MM 1b.

Observation of the dust emission (green) and the cool gas around MM1a (red is receding gas, blue is approaching gas), indicating that the outflow cavity rotates in the same sense as the central accretion disc. MM1b is seen orbiting in the lower left. 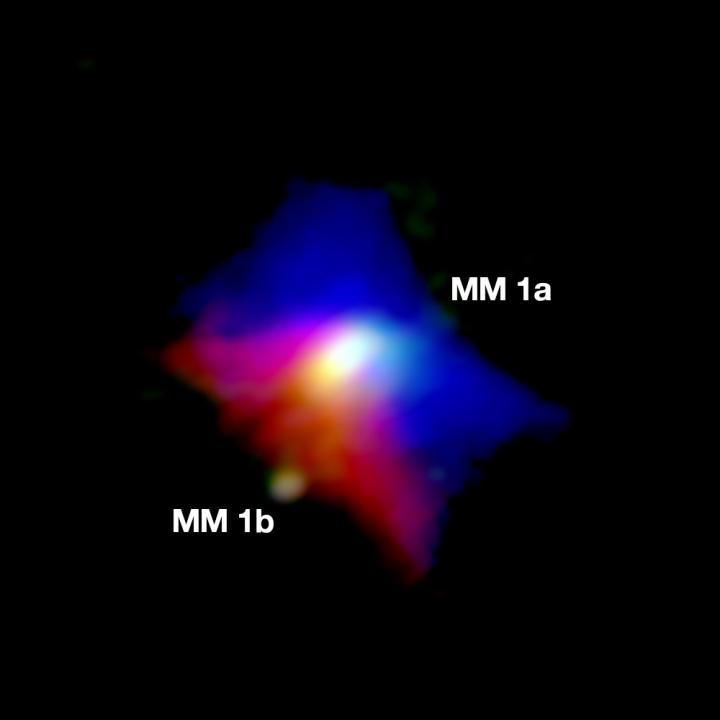 "Many older massive stars are found with nearby companions," added Dr Ilee. "But binary stars are often very equal in mass, and so likely formed together as siblings. Finding a young binary system with a mass ratio of 80:1 is very unusual, and suggests an entirely different formation process for both objects."

The favoured formation process for MM 1b occurs in the outer regions of cold, massive discs. These "gravitationally unstable" discs are unable to hold themselves up against the pull of their own gravity, collapsing into one - or more - fragments.

Dr Duncan Forgan, a co-author from the Centre for Exoplanet Science at the University of St Andrews, added: "I've spent most of my career simulating this process to form giant planets around stars like our Sun. To actually see it forming something as large as a star is really exciting."

The researchers note that newly-discovered young star MM 1b could also be surrounded by its own circumstellar disc, which may have the potential to form planets of its own - but it will need to be quick.

Observation of the dust emission (green) and hot gas rotating in the disc around MM 1a (red is receding gas, blue is approaching gas). MM 1b is seen the lower left. 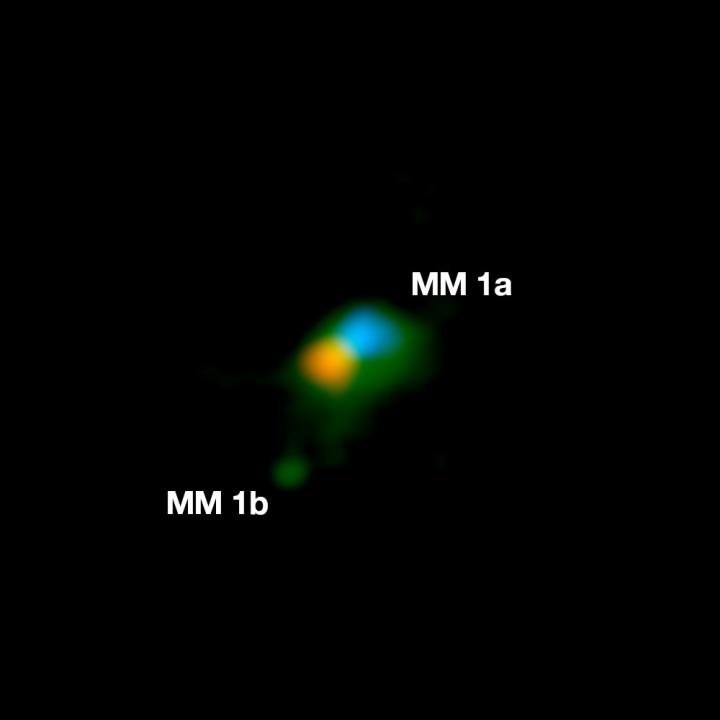 Dr Ilee added: "Stars as massive as MM 1a only live for around a million years before exploding as powerful supernovae, so while MM 1b may have the potential to form its own planetary system in the future, it won't be around for long."

The astronomers made this surprising discovery by using a unique new instrument situated high in the Chilean desert - the Atacama Large Millimetre/submillimetre Array (ALMA).

Using the 66 individual dishes of ALMA together in a process called interferometry, the astronomers were able to simulate the power of a single telescope nearly 4km across, allowing them to image the material surrounding the young stars for the first time.

The team have been granted additional observing time with ALMA to further characterise these exciting stellar systems in 2019. The upcoming observations will simulate a telescope that is 16km across - comparable to the area inside of the ring-road surrounding Leeds.