Two VA researchers have explored how memory is tied to the hippocampus, with findings that will expand scientists’ understanding of how memory works.

Drs. Christine N. Smith and Larry R. Squire, both with the VA San Diego Healthcare System and the University of California, San Diego, found that declarative memory—recalling facts and events—depends on conscious knowledge of what has been learned. The finding helps explain how the hippocampus controls the process of memory. They also showed that conscious knowledge is compromised in patients with damage to the hippocampus.

One pair of scenes used in Smith and Squire’s experiment showed a moving truck parked in front of a house. In the bottom image, the worker at the back of the truck has been removed. 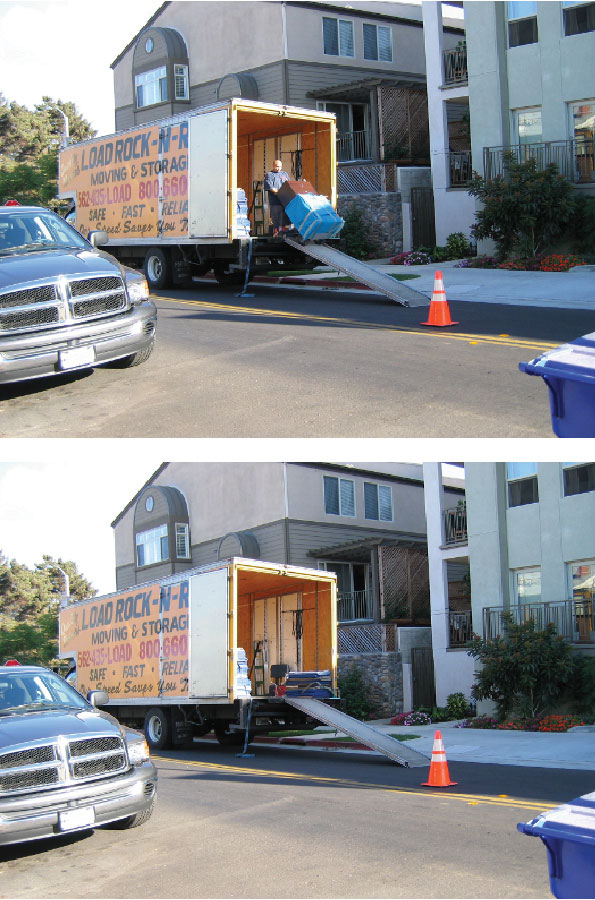 Smith sums up the findings by saying, “Our study shows that awareness is a key feature of declarative memory.”

The results appeared in the Nov. 20, 2018, issue of the Proceedings of the National Academy of Sciences.

Past research has shown that damage to the medial temporal lobe (MTL), the brain region that contains the hippocampus, can cause problems with declarative memory. This type of memory, the ability to remember information about past facts and events, has been linked to the hippocampus. It is expressed through direct recollection. Another type of memory—nondeclarative—refers to skill and habit learning, as well as and other types of learning, that are based on performance rather than recollection. Nondeclarative memory does not seem to be affected by MTL damage. For example, a person with MTL damage may still remember how to ride a bike, but might not remember what he or she did yesterday.

While scientists know that the hippocampus is involved in declarative but not nondeclarative memory, how exactly the hippocampus operates during memory acquisition is not well-understood. According to Squire: “A central issue for understanding memory and memory disorders is the matter of classification. What kinds of memory are there, what are the characteristics of each kind, and what brain systems are important for each kind?”

One theory is that declarative memory is linked to conscious knowledge, or awareness of what has been learned. Another theory suggests that memory is dependent on how the brain processes information, rather than on conscious knowledge. For example, the second theory suggests that the MTL is needed when learning associations of relationships between items, regardless of whether the person is aware of what he or she has learned.
Experiment included patients with amnesia

To test these two competing theories, Smith and Squire recruited five memory-impaired patients with MTL lesions. The patients, with an average age of 63, had amnesia from different causes. Two became amnesic after a drug overdose and associated respiratory failure, one suffered ischemia (lack of blood to the brain) because of kidney failure and toxic shock syndrome, one had viral encephalitis, and one became amnesic with no known cause. Brain scans showed that these patients had smaller-than-normal hippocampus volume. The researchers also recruited six healthy people to serve as controls.

For the experiment, participants were shown 24 scenes for five seconds each. After a short break, they were shown the scenes again. After another break, they were shown the same 24 scenes, except that 12 had been changed and 12 remained the same. Changes were either an item being added to the scene or an item being removed. For example, in a scene of a moving truck in front of a building, the first picture showed a worker with a cart while in the second picture the worker had been removed.

The process was repeated with 24 different scenes in a second session. A computer tracked eye movements to record where in the pictures participants were looking.

Drs. Christine Smith and Larry Squire study memory and learning. On the shelf behind Squire is a replica of a sea horse. The brain’s hippocampus—crucial in memory—is named based on the ancient Greek term for sea horse. 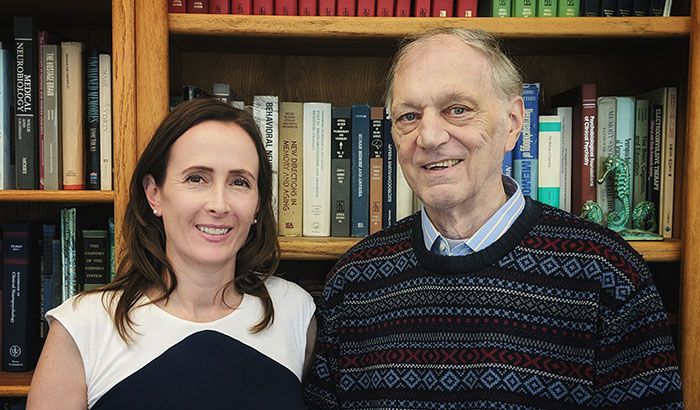 
During the third round, participants were told to look for possible changes. They were then asked to state whether each scene was the same or changed, and to rank their confidence in that answer. Finally, participants were shown the changed scenes again and asked to describe what was changed and identify where in the picture the change occurred.
Huge gap in results between patients and healthy controls

The results showed that patients with MTL lesions were “markedly impaired” at telling which scenes were changed. Specifically, control participants correctly identified an average of 16.5 out of 24 of the changed scenes, and 20.5 of the unchanged scenes. Patients identified only 8.4 changes and 18.4 repeated scenes. Controls were also more confident in their answers when they were correct than when they were incorrect, while patients showed the same level of confidence in correct and incorrect answers.

Patients were able to correctly identify a scene as changed, describe the change, and locate the section of the image that changed for only10.8 percent of the altered images. Controls did this for 60.4 percent of the images. Getting all three aspects of the change right was termed “robust knowledge.”

Both controls and patients directed their eyes toward the change only when they had robust knowledge of the change. This showed that the manipulation effect is a function of conscious memory, according to Smith and Squire. This eye movement effect suggests that conscious knowledge is an important aspect of declarative memory, and that the hippocampus supports the acquisition of this type of memory.

Smith explains the eye-movement data in this way: “When memory-impaired patients occasionally succeed at remembering a past event (measured in their eye movements), they also consciously remember the event. When the patients failed to remember (and eye movements showed no recognition), they were unaware of the past event. Our findings suggest that awareness of the past is a crucial and consistent feature of the kind of memory that depends on the hippocampus”

According to Squire, adding to the understanding of how memory works could help improve how doctors diagnose and treat memory problems. “Scientists often say that we want to fix the car but it will help to know how the car works. As we learn more about memory, we move closer to being able to detect, prevent, and treat diseases and disorders that affect memory,” he explains.

The work was supported by VA and the National Institute of Mental Health.