Scientists from NASA Goddard have discovered that not only are Saturn's rings younger than previously thought, but also that the rings are actually disappearing at a rapid pace through a process called "ring rain."

Scientists have long wondered if Saturn was formed with the rings or if the planet acquired them later in life. The new research favors the latter scenario, indicating that they are unlikely to be older than 100 million years, as it would take that long for the C-ring to become what it is today assuming it was once as dense as the B-ring. “We are lucky to be around to see Saturn’s ring system, which appears to be in the middle of its lifetime. However, if rings are temporary, perhaps we just missed out on seeing giant ring systems of Jupiter, Uranus and Neptune, which have only thin ringlets today!” O’Donoghue added.

Various theories have been proposed for the ring’s origin. If the planet got them later in life, the rings could have formed when small, icy moons in orbit around Saturn collided, perhaps because their orbits were perturbed by a gravitational tug from a passing asteroid or comet.

An artist's impression of how Saturn may look in the next hundred million years. The innermost rings disappear as they rain onto the planet first, very slowly followed by the outer rings.

In 1986, Jack Connerney of NASA Goddard published a paper in Geophysical Research Letters that linked those narrow dark bands to the shape of Saturn’s enormous magnetic field, proposing that electrically charged ice particles from Saturn’s rings were flowing down invisible magnetic field lines, dumping water in Saturn’s upper atmosphere where these lines emerged from the planet. The influx of water from the rings, appearing at specific latitudes, washed away the stratospheric haze, making it appear dark in reflected light, producing the narrow dark bands captured in the Voyager images.

Saturn’s rings are mostly chunks of water ice ranging in size from microscopic dust grains to boulders several yards (meters) across. Ring particles are caught in a balancing act between the pull of Saturn’s gravity, which wants to draw them back into the planet, and their orbital velocity, which wants to fling them outward into space. Tiny particles can get electrically charged by ultraviolet light from the Sun or by plasma clouds emanating from micrometeoroid bombardment of the rings. When this happens, the particles can feel the pull of Saturn’s magnetic field, which curves inward toward the planet at Saturn’s rings. In some parts of the rings, once charged, the balance of forces on these tiny particles changes dramatically, and Saturn’s gravity pulls them in along the magnetic field lines into the upper atmosphere.

Once there, the icy ring particles vaporize and the water can react chemically with Saturn’s ionosphere. One outcome from these reactions is an increase in the lifespan of electrically charged particles called H3+ ions, which are made up of three protons and two electrons. When energized by sunlight, the H3+ ions glow in infrared light, which was observed by O’Donoghue’s team using special instruments attached to the Keck telescope in Mauna Kea, Hawaii.

Their observations revealed glowing bands in Saturn’s northern and southern hemispheres where the magnetic field lines that intersect the ring plane enter the planet. They analyzed the light to determine the amount of rain from the ring and its effects on Saturn’s ionosphere. They found that the amount of rain matches remarkably well with the astonishingly high values derived more than three decades earlier by Connerney and colleagues, with one region in the south receiving most of it.

The team also discovered a glowing band at a higher latitude in the southern hemisphere. This is where Saturn’s magnetic field intersects the orbit of Enceladus, a geologically active moon that is shooting geysers of water ice into space, indicating that some of those particles are raining onto Saturn as well. “That wasn’t a complete surprise,” said Connerney. “We identified Enceladus and the E-ring as a copious source of water as well, based on another narrow dark band in that old Voyager image.” The geysers, first observed by Cassini instruments in 2005, are thought to be coming from an ocean of liquid water beneath the frozen surface of the tiny moon. Its geologic activity and water ocean make Enceladus one of the most promising places to search for extraterrestrial life.

Saturn’s moon Enceladus drifts before the rings and the tiny moon Pandora in this view that NASA’s Cassini spacecraft captured on Nov. 1, 2009. The entire scene is backlit by the Sun, providing striking illumination for the icy particles that make up both the rings and the jets emanating from the south pole of Enceladus, which is about 314 miles (505 km) across. Pandora, which is about (52 miles, 84 kilometers) wide, was on the opposite side of the rings from Cassini and Enceladus when the image was taken. This view looks toward the night side on Pandora as well, which is lit by dim golden light reflected from Saturn. 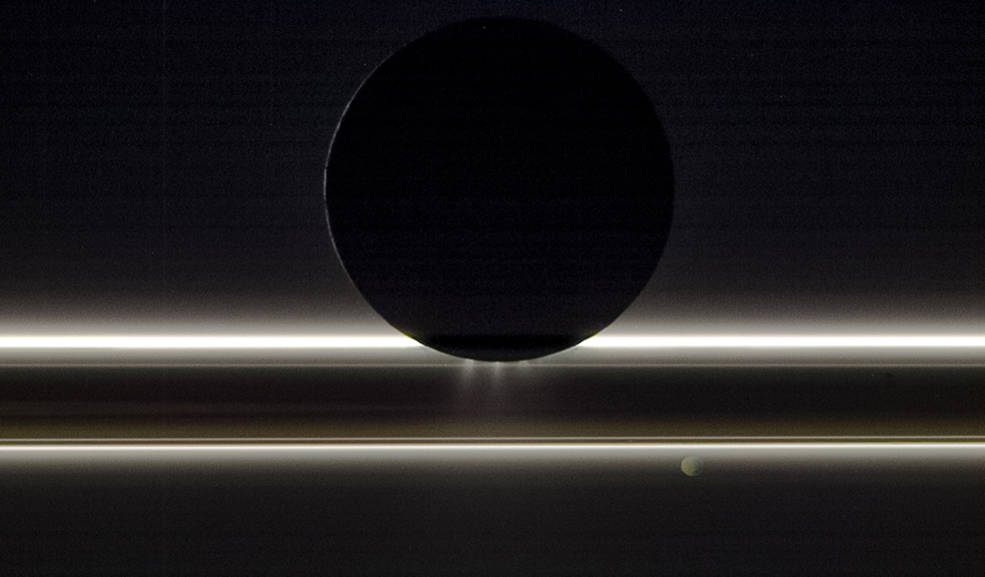 The team would like to see how the ring rain changes with the seasons on Saturn. As the planet progresses in its 29.4-year orbit, the rings are exposed to the Sun to varying degrees. Since ultraviolet light from the Sun charges the ice grains and makes them respond to Saturn’s magnetic field, varying exposure to sunlight should change the quantity of ring rain.

The research was funded by NASA and the NASA Postdoctoral Program at NASA Goddard, administered by the Universities Space Research Association. The W.M. Keck Observatory is operated as a scientific partnership among the California Institute of Technology, the University of California, and NASA, and the data in the form of its files are available from the Keck archive. The authors wish to recognize the significant cultural role and reverence that the summit of Mauna Kea has within the indigenous Hawaiian community; they are fortunate to have the opportunity to conduct observations from this mountain.