Groups of Pilot Whales Have Their Own Dialects

In humans, different social groups, cities, or regions often have distinct accents and dialects. Those vocal traits are not unique to us, however. A new study from the Woods Hole Oceanographic Institution (WHOI) has found that short-finned pilot whales living off the coast of Hawai’i have their own sorts of vocal dialects, a discovery that may help researchers understand the whales’ complex social structure. The study was published on Dec. 14, 2018, in the journal Behavioral Ecology and Sociobiology.

“These groups of pilot whales all use the same habitat. The fact that they have different vocal repertoires means that they’re purposely not associating with each other,” says Amy Van Cise, a Postdoctoral Scholar at WHOI and lead author on the study. “It’s sort of like if you’ve got hipsters and prep kids in the same high school—each group has different slang. They identify themselves with certain speech to maintain that separation.” 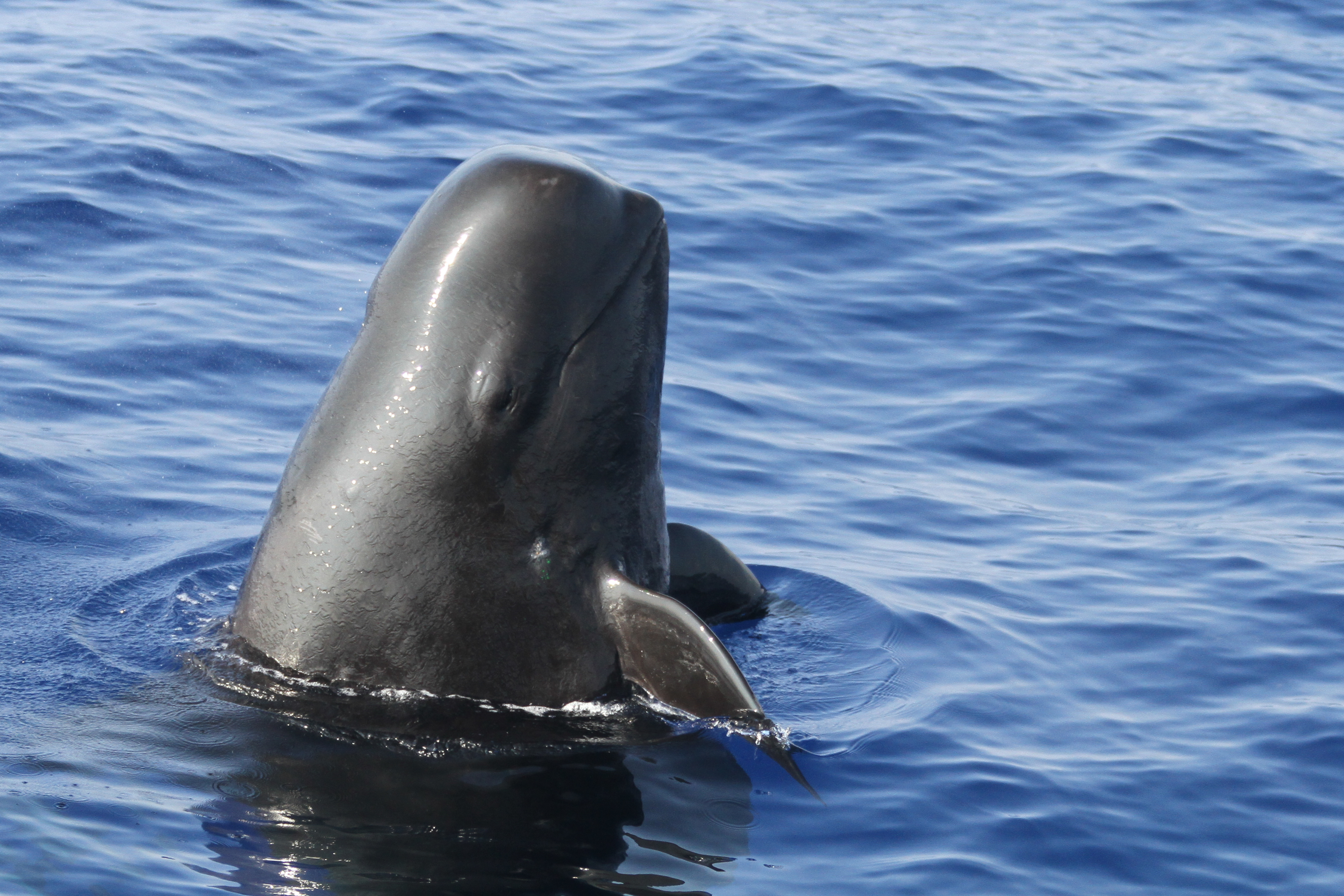 This finding could be especially important for understanding the species, since relatively little is currently known about their social behavior.

“On a broad-scale they are understudied, mainly because of where they spend their time,” says biologist Robin Baird of the Cascadia Research Consortium, a co-author on the paper. “Hawai’i is one of the only locations in the U.S. where you can fairly quickly and easily get to areas where you can find pilot whales, while staying in good working conditions.”

In a previous 15-year study of the Hawai’ian whales, Baird and colleagues were able to photograph, identify, and categorize groups of whales, creating a database of associations. The researchers also took tiny biopsies of skin from the back of each whale they approached to gather genetic information.

Based on that data, Van Cise found that the lowest and smallest level of organization, called a “unit,” of pilot whales, appears to be made up of a handful of directly-related individuals. Those units combine to form “clusters”—essentially extended family—and multiple families together make up a “community” of the whales.

This study builds on Van Cise’s prior work. Over several years, she and Baird’s team took a small boat off the coast of Hawai‘i and Kaua‘i Islands in search of pilot whales, identified individual whales, and recorded their calls with a specialized underwater microphone. She also continued taking genetic samples from the animals. Once finished, Van Cise and a team of volunteers painstakingly categorized individual types of whale calls on the recordings, sorting them into distinct groups.

This spectrogram shows a visual representation of three different pilot whale calls. The green stripe-like lines represent audio frequencies in each whale's ‘dialect', which subtly change from one group to another.

“That let us effectively make a map of vocal repertoire that we could superimpose onto a map of the whales’ social structure,” she says. “If two social groups sound similar to each other acoustically, that likely means that that’re that they’re communicating with each other regularly, using similar habitats or hunting grounds and foraging habits. This gives us a better sense of the social ties between whale groups. In the long term, that could help us understand both their genetic diversity and their evolution.”

That last part is especially important, Van Cise notes. In each family of whales, the genetic diversity between individuals isn’t large—children by necessity share many of their genes with their parents. Across the entire whale population, however, it’s a different story. For that reason, she says, it’ll be essential to conserve pilot whales at family level, rather than focusing on individuals.

The groups of pilot whales all use the same habitat, but have different vocal repertoires. This means that they’re purposely not associating with each other, says WHOI researcher Amy Van Cise.


“Although pilot whales are not currently endangered, they still face a number of threats. They’re hunted in many countries around world, and we think they may be sensitive to navy sonar or other human-made noise in ocean,” she says. “When you hear of mass whale stranding incidents on a beach, it’s often pilot whales, because the entire social group strands. That’s the strength of the social tie—if leader of a group beaches itself, all the animals in group will beach themselves.”

Also collaborating on the study were Sabre D. Mahaffy of Cascadia Research Collective and Jay Barlow of the NOAA Southwest Fisheries Science Center. Funding for the study was provided by grants from the Pacific Islands Fisheries Science Center and Office of Naval Research, as well as Commander, Pacific Fleet. SoundTrap acoustic recording equipment was purchased with funding from the SIO/NSF IGERT fellowship program. DMON data collection was funded by the Office of Naval Research, award numbers N000141110612 and N00014-15-1-2299. The WHOI Marine Mammal Center and the Sawyer and Penzance Endowed Funds also provided funding.

The Woods Hole Oceanographic Institution is a private, non-profit organization on Cape Cod, Mass., dedicated to marine research, engineering, and higher education. Established in 1930 on a recommendation from the National Academy of Sciences, its primary mission is to understand the oceans and their interaction with the Earth as a whole, and to communicate a basic understanding of the oceans’ role in the changing global environment.