Ankylosaurs likely regulated their body temperature with convoluted nasal passages that acted as heat exchangers between air and body, according to a study published December 19, 2018 in the open-access journal PLOS ONE by Jason Bourke from Ohio University, USA, and colleagues.

This is a Panoplosaurus mirus and Euoplocephalus tutus. 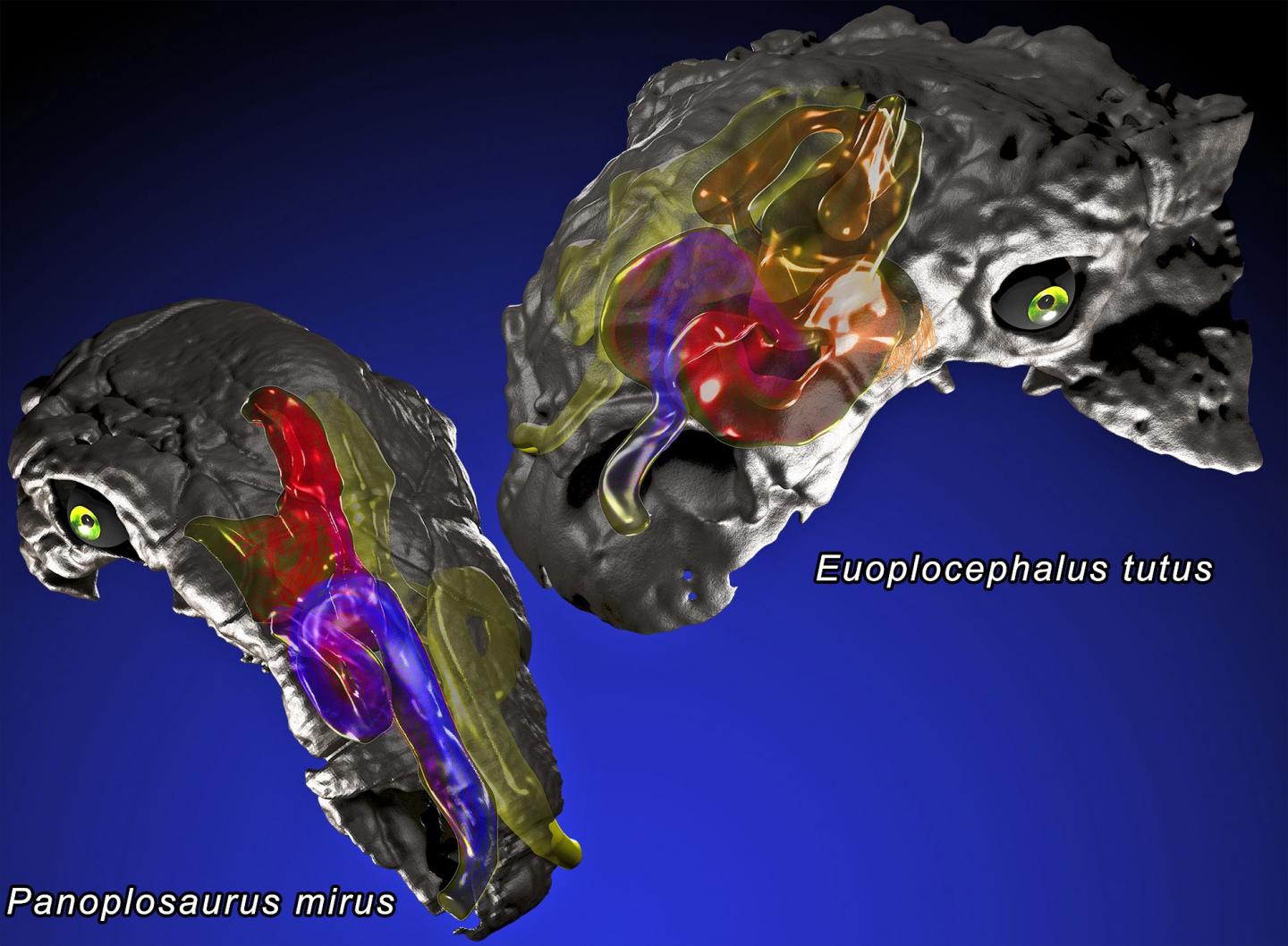 Credit: Bourke et al, 2018.
Modern mammals and birds have long, convoluted nasal passages called turbinates that function as an air conditioner, warming and humidifying air as it is inhaled, and cooling and drying exhaled air to prevent water and heat loss. Although these structures are typically not preserved in the fossil record, convoluted nasal passages resembling turbinates have been discovered in fossils of ankylosaur, an armor-plated herbivorous dinosaur from the Cretaceous. Based on anatomical evidence, Bourke and colleagues had previously suggested that the ankylosaur's nasal passage was an efficient heat exchanger. In this study, the team used computer simulations to test this hypothesis in two ankylosaur species: Panoplosaurus mirus and Euoplocephalus tutus.

Computational fluid dynamic (CFD) analyses were conducted on 3D digital reconstructions of the fossilized nasal passages to simulate airflow and transfer of heat between air and body. Heat recovery in Panoplosaurus and Euoplocephalus during exhalation simulations resulted in energy savings of about 65% and 84%, respectively, which is comparable to values measured experimentally in modern animals. The nasal passages of Euoplocephalus may have been more efficient heat exchangers due to the animal's larger body size.

The authors conclude that elaborate nasal passages likely allowed ankylosaurs to regulate their body temperature by acting as heat exchangers between air and body, similarly to respiratory turbinates in modern mammals and birds.

Bourke adds: "The large body sizes of dinosaurs like ankylosaurs, would have worked great for retaining heat, but they would also have put the small brains of these dinosaurs at a constant risk of overheating. Ankylosaurs appear to have solved this problem by greatly stretching out and coiling their nasal passages within their skull, allowing them to cool down blood destined for the brain and providing an effective air conditioner for their heads."