Genetic detective work has illuminated the important role of Jewish culture in the widespread adoption of citrus fruit by early Mediterranean societies.

The fascinating find came to light in an investigation into a bizarre acidless mutation which makes citrus juice 1000 times less acidic.

John Innes Centre researchers used genetic analysis to trace the acidless mutations in citron, the first citrus species to be cultivated in the Mediterranean. 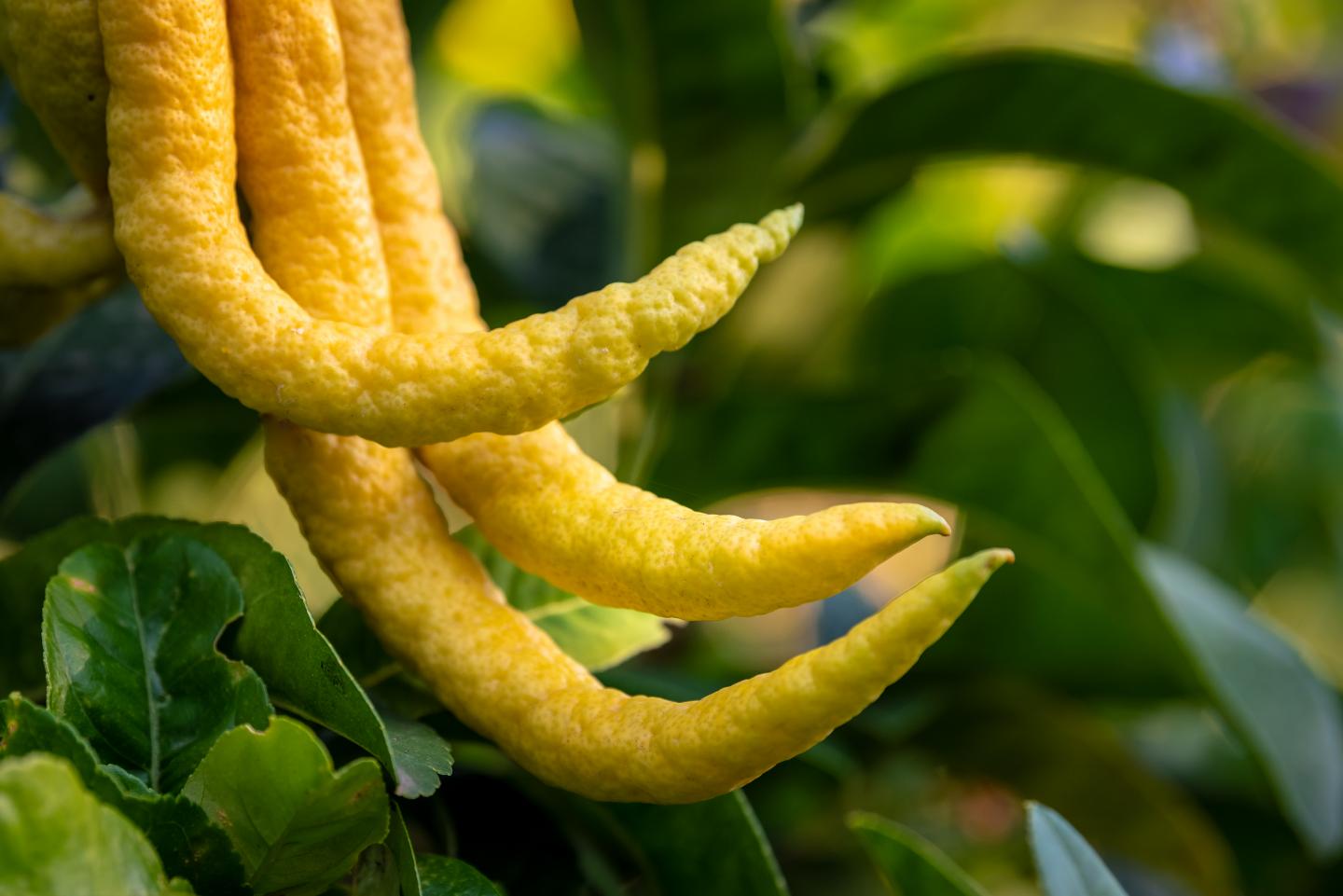 
"Some people thought that this was a recent mutation that originated in Corsica, or somewhere in the Mediterranean, but we have found that this is not new. It's an ancient mutation that is present in Chinese fingered citrons known as Buddha's Hands and those used in the Sukkot Jewish ritual," explains Dr Eugenio Butelli of the John Innes Centre and first author of the paper.

The acidless mutations have captivated botanists and breeders for centuries and appear in many citrus varieties including citron, sweet lime, limetta, lemon and sweet orange.

Acidless citrus fruit have also lost the ability to produce anthocyanin pigments, that give a blush of dark red to leaves, flowers and, sometimes, flesh.

The researchers identified a gene, which they called Noemi, as the key factor behind the regulation of fruit acidity. Analysis also revealed that this gene works in partnership with another, named Ruby, to control anthocyanin production.

The study identified specific mutations affecting the Noemi gene in several acidless citrus species and hybrids. These acidless fruits are often referred to as sweet or insipid because of the reduction in fruit acidity and are highly prized citrons (Etrog in Hebrew) used in the Jewish harvest festival of Sukkot.

One of these mutations matched those found in fingered citron varieties first cultivated in China 3300 years ago. This confirmed that this mutation originated before the arrival of citron into the Mediterranean.

This is Dr. Eugenio Butelli with acidless citrons. 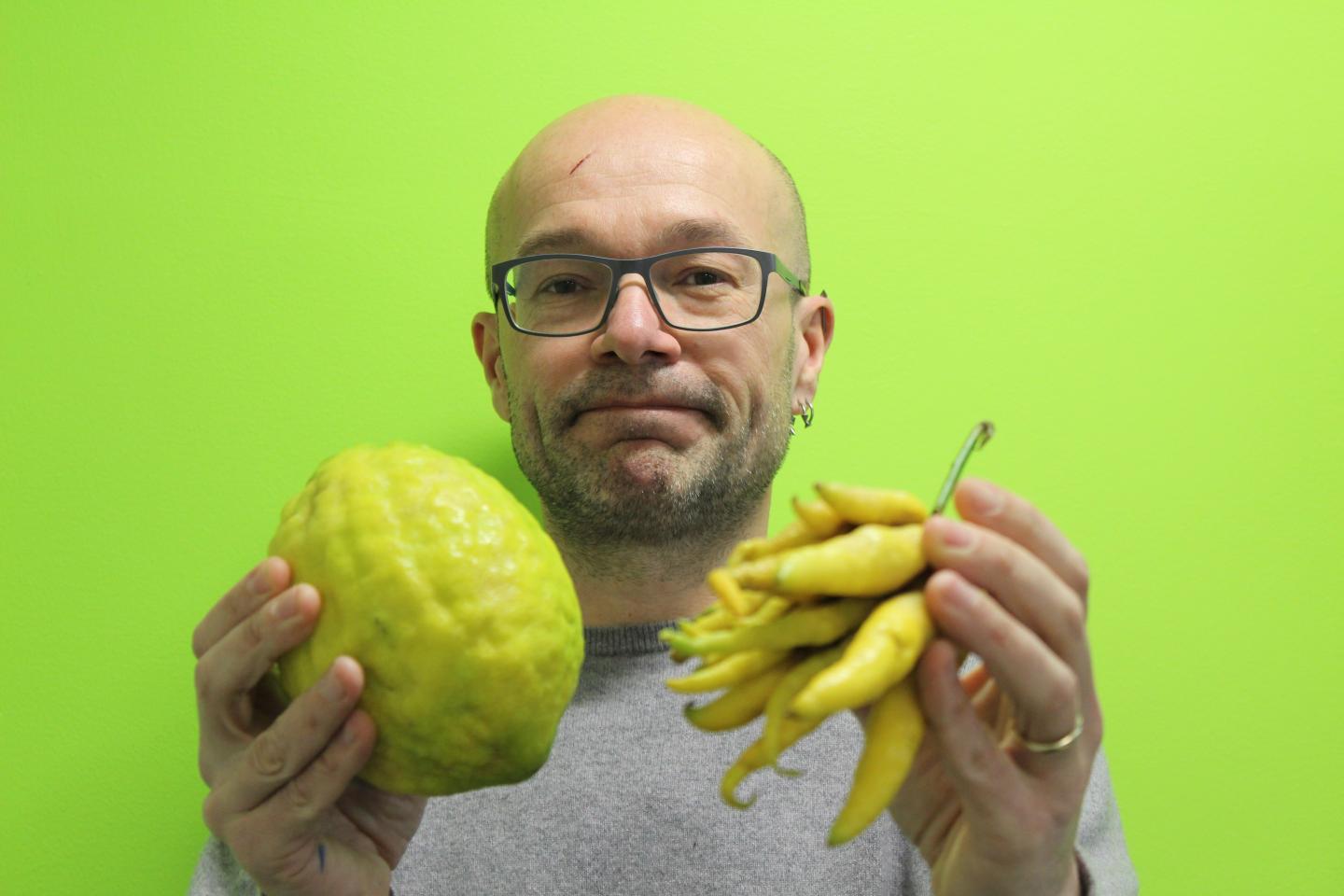 The analysis suggests that the authentic Jewish Etrog used ritually was an acidless one, an idea supported by a reference to "sweet citron" in the Jewish legal text, the Talmud, dating from 200 C.E.

The study which appears in Current Biology illuminates the path of domestication of citron. It supports the view that the spread of citron in Mediterranean regions was facilitated by its adoption in Jewish culture as an important religious symbol. Some scholars speculate that Jews in exile in Babylonia brought the citron back to Palestine.

Why was this sweet, or insipid citrus, with plain white flowers and leaves drained of colour, the chosen fruit?

"Citron was first cultivated for its medicinal properties in China and its rind was used as a medicinal product, not as a food" explains Professor Cathie Martin of the John Innes Centre and a co-author on the study.

"By the time it reached the Mediterranean in Roman times, citron was a luxury item used for its fragrance to keep linen fresh. The presence of white flowers in the acidless mutation seems important because they are a symbol of purity and we speculate that there was a strong selection for the loss of anthocyanins, which normally add colour to leaves and flowers."

Citron is one of four primary species that make up the citrus genus, a complex group of flowering plants with notable nutritional, medicinal and aromatic value. Despite becoming one of the world's most economically important fruit crops, its history of evolution and domestication has remained obscure until recently.

The characterisation of Noemi provides researchers with an important genetic marker opening a fascinating landscape for genetic analysis of seeds found amid the burials of the ancient world and fossil remains from even further back in time.

The study also gives researchers the information they need to develop fruit of the future - to modulate their level of acidity and to increase their content of health-protecting anthocyanin compounds.

"If you could introduce these mutations stably in lemon, for example, you could make lemonade which does not need so much added sugar in it, making it healthier to drink and better for growing teeth." explains Professor Martin.