Abell S1063, a galaxy cluster, was observed by the NASA/ESA Hubble Space Telescope as part of the Frontier Fields programme. The huge mass of the cluster — containing both baryonic matter and dark matter — acts as cosmic magnification glass and deforms objects behind it. In the past astronomers used this gravitational lensing effect to calculate the distribution of dark matter in galaxy clusters.

A more accurate and faster way, however, is to study the intracluster light (visible in blue), which follows the distribution of dark matter. 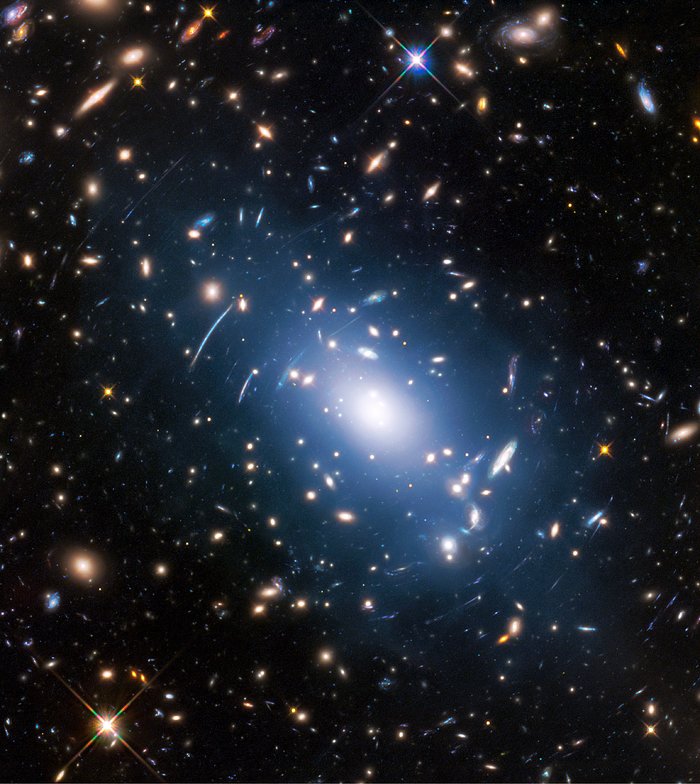 Astronomers using data from the NASA/ESA Hubble Space Telescope have employed a revolutionary method to detect dark matter in galaxy clusters. The method allows astronomers to “see” the distribution of dark matter more accurately than any other method used to date and it could possibly be used to explore the ultimate nature of dark matter. The results were published in the journal Monthly Notices of the Royal Astronomical Society.

In recent decades astronomers have tried to understand the true nature of the mysterious substance that makes up most of the matter in the Universe — dark matter — and to map its distribution in the Universe [1]. Now two astronomers from Australia and Spain have used data from the Frontier Fields programme of the NASA/ESA Hubble Space Telescope to accurately study the distribution of dark matter [2].

This animation switches between an original image of the galaxy cluster MACS J0416.1–2403, as it was observed by the Frontier Field team, and a version, in which the intracluster light (in blue) is highlighted.

Intracluster light is a byproduct of interactions between galaxies. It can be used to make the distribution of dark matter in galaxy clusters visible.

“We have found a way to ‘see’ dark matter,” explains Mireia Montes (University of New South Wales, Australia), lead author of the study. “We have found that very faint light in galaxy clusters, the intracluster light, maps how dark matter is distributed.”

This image from the NASA/ESA Hubble Space Telescope shows the galaxy cluster MACS J0416.1–2403. This is one of six being studied by the Hubble Frontier Fields programme, which together have produced the deepest images of gravitational lensing ever made.

Due to the huge mass of the cluster it is bending the light of background objects, acting as a magnifying lens. Astronomers used this and two other clusters to find galaxies which existed only 600 to 900 million years after the Big Bang. 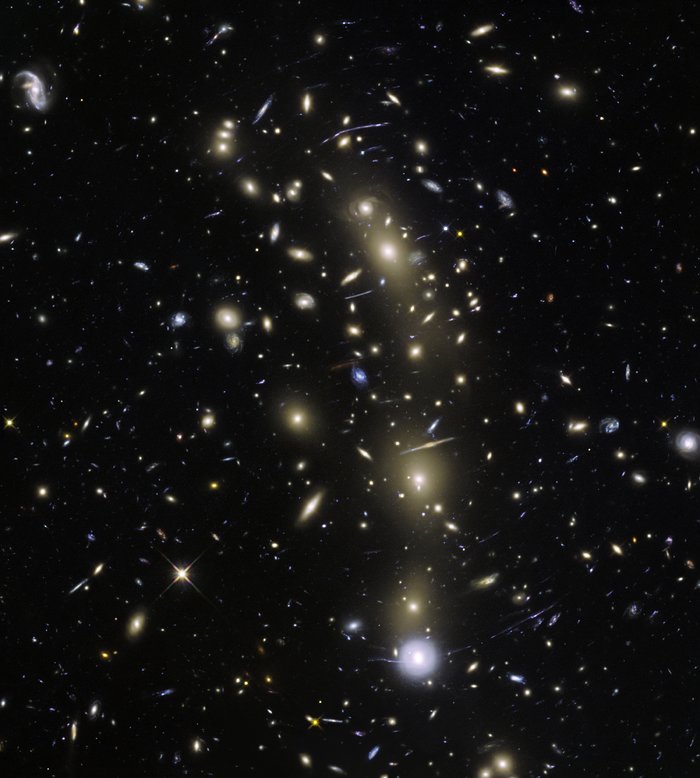 This method is also more efficient than the more complex method of using gravitational lensing. While the latter requires both accurate lensing reconstruction and time-consuming spectroscopic campaigns, the method presented by Montes utilises only deep imaging. This means more clusters can be studied with the new method in the same amount of observation time.

The results of the study introduce the possibility of exploring the ultimate nature of dark matter. “If dark matter is self-interacting we could detect this as tiny departures in the dark matter distribution compared to this very faint stellar glow,” highlights Ignacio Trujillo (Instituto de Astrofísica de Canarias, Spain), co-author of the study. Currently, all that is known about dark matter is that it appears to interact with regular matter gravitationally, but not in any other way. To find that it self-interacts would place significant constraints on its identity.

This image from the NASA/ESA Hubble Space Telescope shows the galaxy cluster MACS J0416. This is one of six being studied by the Hubble Frontier Fields programme, which together have produced the deepest images of gravitational lensing ever made.
Scientists used intracluster light (visible in blue) to study the distribution of dark matter within the cluster. 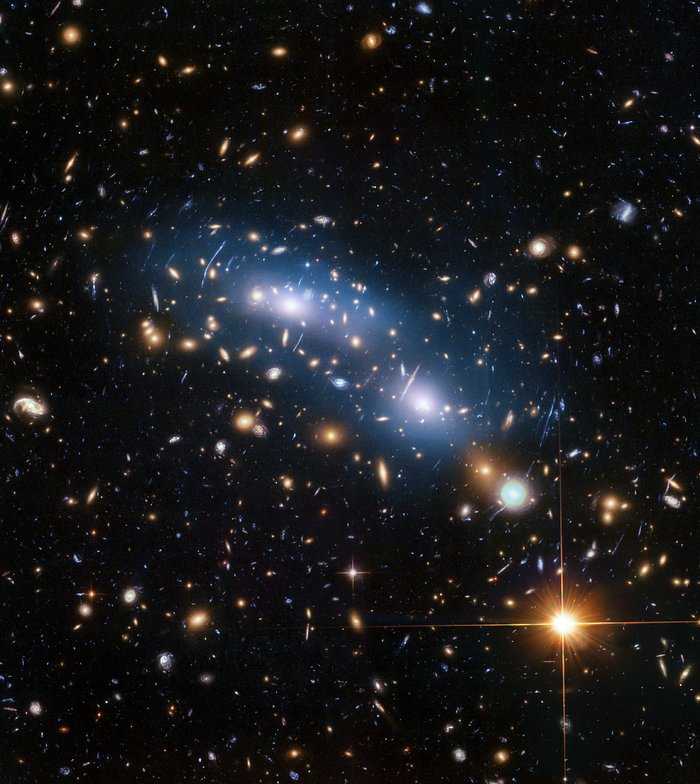 
For now, Montes and Trujillo plan to survey more of the original six clusters to see if their method remains accurate. Another important test of their method will be the observation and analysis of additional galaxy clusters by other research teams, to add to the data set and confirm their findings.

The team can also look forward to the application of the same techniques using future space-based telescopes like the NASA/ESA/CSA James Webb Space Telescope, which will have even more sensitive instruments able to resolve faint intracluster light in the distant Universe.

“There are exciting possibilities that we should be able to probe in the upcoming years by studying hundreds of galaxy clusters,” concludes Ignacio Trujillo.
Notes

[1] Dark matter makes up about 85% of the matter in the Universe, and about a quarter of its total energy density. Dark matter does not emit any kind of electromagnetic radiation — its presence can only be determined via gravitational effects.

[2] The Hubble Frontier Fields programme was a deep imaging initiative designed to utilise the strong gravitational lensing effects in galaxy clusters to see extremely distant galaxies and thereby gain insight into the early Universe and the evolution of galaxies since that time. The programme observed six galaxy clusters over 630 hours of Hubble’s time. To receive the new results presented here the data was used in a different way, without using gravitational lensing.
More information