Birds are the surviving descendants of predatory dinosaurs. However, since the likes of Tyrannosaurus and Velociraptor, some parts of their anatomy have become radically transformed. The skull, for instance, is now toothless, and accommodates much larger eyes and brain.

Skulls are like 3-D puzzles made of smaller bones: As the eye socket and brain case expanded along evolution, birds lost two bones of the skull that were once present in dinosaurs -the prefrontal, at the upper front corner of the eye, and the postorbital, behind the eye (See the skull of Erlikosaurus compared to the seabird Sula in the image below).

Birds evolved from dinosaurs, radically transforming their skull as it became toothless and the brain grew bigger. The large dinosaur with a dark outline in the image is Erlikosaurus; below, the modern seabird Sula. During evolution, birds lost two of the skull bones once present in dinosaurs: The prefrontal, and the postorbital. However, during the embryonic development of birds, starting points for the formation of these bones are still present. The dark circles above illustrate the appearance of these embryonic bones under the microscope, as revealed by a purple stain that is bone-specific (alizarin red). The embryonic prefrontal and postorbital later fuse to other embryonic bones, becoming undetectable in the adult. 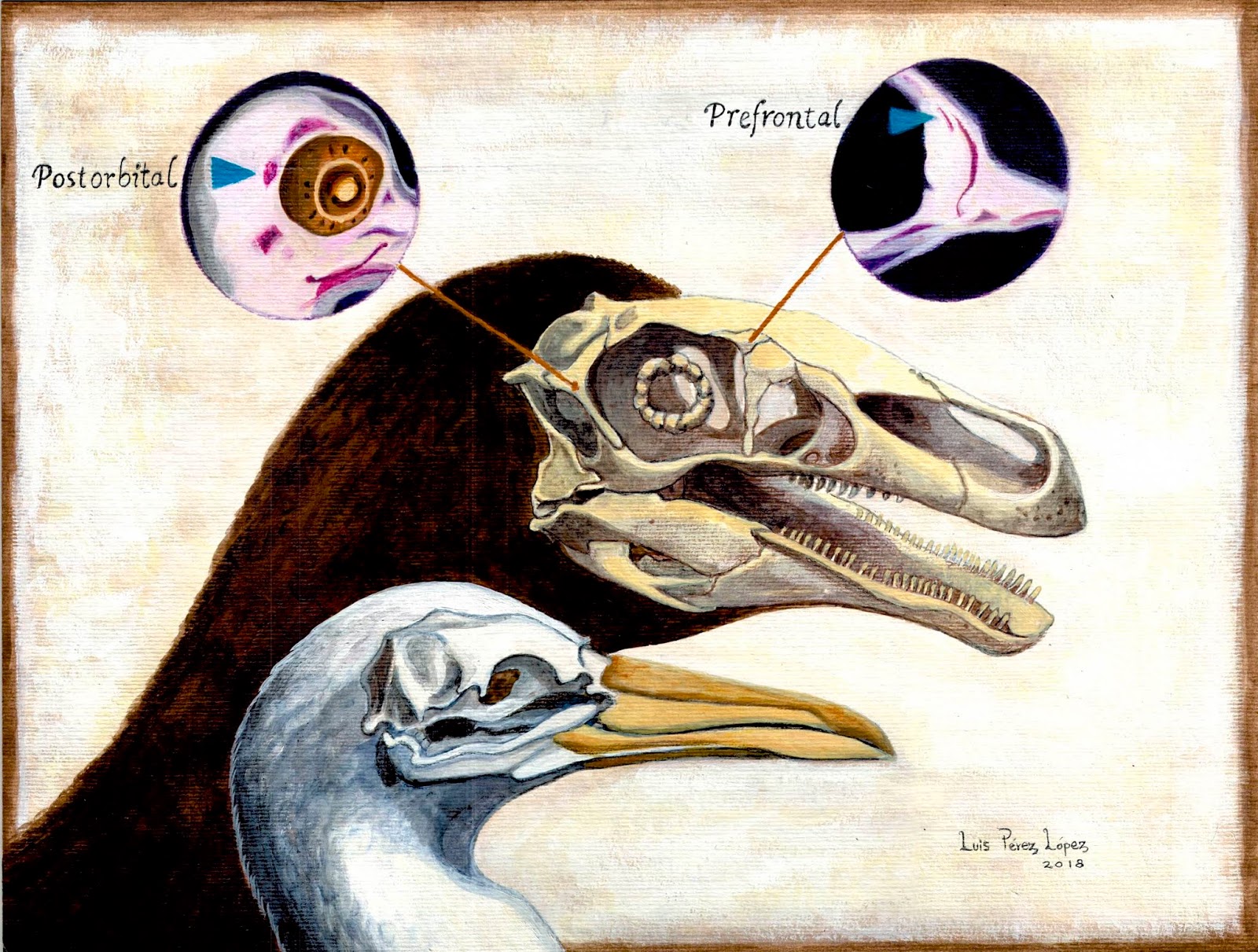 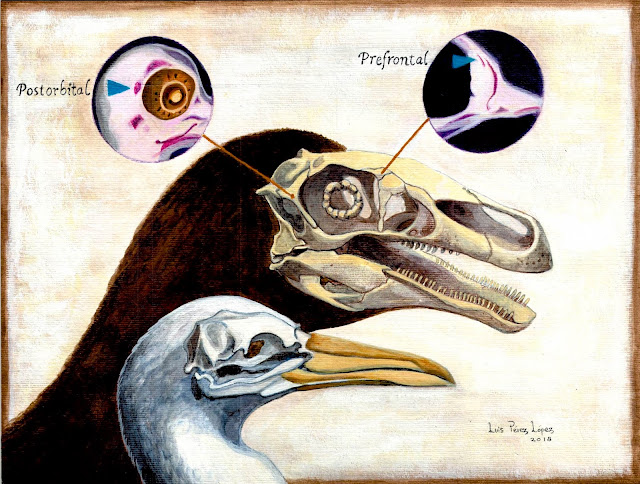 Or rather, this seemed to be the case. A new study published in Nature Ecology & Evolution has uncovered how during embryonic development of the bird skull, both of these dinosaur bones are still present as starting points of bone formation (ossification centers). Rather than becoming independent bones of the adult skull (as in ancient predatory dinosaurs), they fuse quickly to other embryonic bones, becoming undetectable in the adult bird. The study is the master’s thesis of evolutionary biologist Daniel Smith, and was carried out at the laboratory led by Alexander Vargas at the University of Chile, funded by CONICYT- The science agency of the Chilean government (grants Anillo ACT172099 and FONDECYT 1150906).

During the evolution of toothed, dinosar-like birds in the Cretaceous period, the disappearance of the adult postorbital coincided with an increase in size of the brain, as well as the frontal bone above the brain. The new study shows how the embryonic postorbital of birds fuses to the frontal, becoming part of that bone. By adding itself to the frontal, the postorbital could have allowed it to expand and accommodate a larger brain in evolution. This discovery has also unraveled a long-standing mystery of embryology: In most animals, the frontal bone is formed from cells coming from the outer layer of the early embryo, called the ectoderm.

Birds are very unusual because their frontal bone develops from two sources of embryonic cells: The front portion is formed from the ectoderm, but the back portion is formed from an inner layer of the embryo, called the mesoderm. The reason for this was enigmatic, but some scientists had suggested that the back portion of the frontal was different because it evolved from a different bone, that became assimilated into the frontal.

The new study has confirmed this hypothesis, by showing that the back portion of the frontal actually starts out as a separate embryonic bone, the same that once developed into the postorbital of dinosaurs (see the image of duck embryos below).

These images of duck embryos show how the postorbital is at a first a separate embryonic bone (above), the same that in dinosaurs became a separate bone of the adult skull. At a later stage, the embryonic postorbital fuses to the frontal, becoming part of this bone (below). 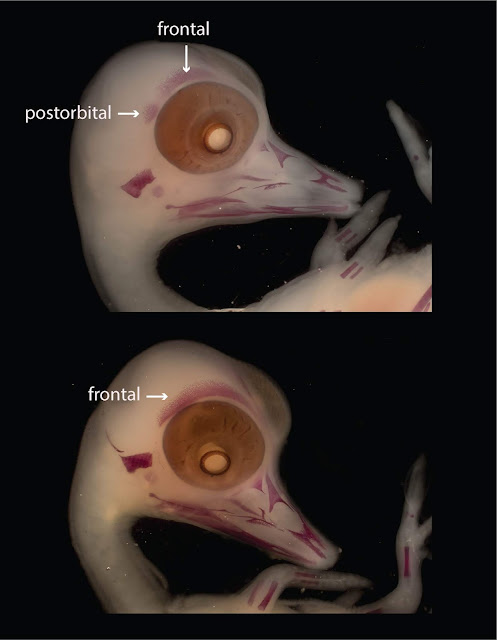 Professor Bhart-Anjan Bhullar at Yale University (who was not part of the study) summarizes the work of his colleagues “Smith-Paredes et al. have discovered dinosaurian vestiges hidden in the embryonic skull of birds, and in so doing have presented an elegant solution to the question of why the avian frontal bone is a composite structure: it incorporates other bones thought lost during the dinosaur-bird transition. Therefore, evolution has worked in a graceful, elegant way —by subtly removing seams and fusing existing building blocks —to build something remarkably divergent and unique."

The Vargas lab has previously studied how parts of the embryonic wrist, shank and foot also show a general dinosaur pattern, before developing an anatomy that is specific to birds. The new study provides further evidence for the “inner dinosaur” of birds, in the sense that much of their embryology is still the same as in their ancient ancestors.
http://dx.doi.org/10.1038/s41559-018-0713-1