A new method for simultaneous measurement of 71 inorganic elements in liquids—including water, beverages, and biological fluids—makes element testing much faster, more efficient, and more comprehensive than was possible in the past.

The researchers studied samples of liquid from a variety of sources worldwide, including tap water from a New York City suburb, snow from Italy and Croatia, rain from Brazil and Pakistan, lake water from Switzerland and Croatia, and seawater from Japan and Brazil. Testing each sample results in a distinct elemental pattern, creating a “fingerprint” that can help differentiate between substances or trace a liquid back to its environmental origin.

The method—developed by researchers at the isotope laboratory of NYU College of Dentistry and described in the journal RSC Advances, published by the Royal Society of Chemistry—may be used to explore and understand the distribution of inorganic elements beyond the few that are typically measured. It has implications for fields such as nutrition, ecology and climate science, and environmental health.

An analytical technique called inductively coupled plasma mass spectrometry (ICP-MS) is used to measure elements. Historically, ICP-MS instruments have measured elements sequentially, or one by one, but a new type of ICP‐MS instrument at NYU College of Dentistry and roughly two dozen other places around the world has the potential to measure the complete range of inorganic elements all at once.

“Because of this new method, our mass spectrometer can simultaneously measure all inorganic elements from lithium to uranium. We’re able to measure the elements in far less time, at far less expense, using far less material,” said Timothy Bromage, professor of biomaterials and of basic science and craniofacial biology at NYU College of Dentistry and the study’s senior author.

This technological advancement may help to fill gaps in our understanding of element distributions and concentrations in substances like water. For instance, the U.S. Environmental Protection Agency monitors and sets maximum concentration limits for 19 elements in drinking water considered to be health risks, yet many elements known to have health consequences—such as lithium or tin—are neither monitored nor regulated.

Bromage and his colleagues designed a method for using simultaneous ICP-MS to detect 71 elements of the inorganic spectrum involving a specific set of calibration and internal standards. The method, for which they have a patent pending, routinely detects elements in seconds to several minutes and in samples as small as 1 to 4 milliliters. 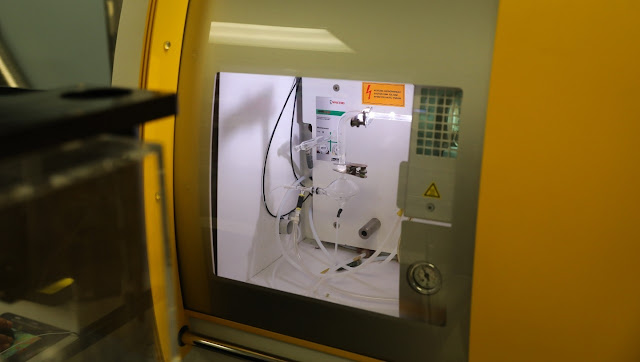 
Bromage and his research team tested the method on waters, beverages, and biological samples. Snow contained the most elements of any water sample: 50 in snow collected in Italy and 42 in a sample from Croatia. “Such evaluations of snow may represent a new and comprehensive means of surveying atmospheric concentrations of elements and for monitoring element patterns in global airflows,” Bromage said.

When testing tap water, the researchers measured 37 elements when the tap was first turned on but only 34 elements after the water was running for five minutes, suggesting that elements such as iron and zinc may be leaching from household pipes into the water.

The researchers also measured elements in bottled water, beer, wine, and milk, as well as in samples of saliva, urine, and blood. Milk was distinguished from the other beverages tested by its high concentrations of titanium, zinc, palladium, and gold.

In each sample, Bromage and his team found a distinct “fingerprint” or elemental pattern, suggesting that samples can be recognized and differentiated by these patterns. The elemental content of water, for example, typically reflects its natural environment, so understanding the elemental composition can tell us if water had its origins from a source with volcanic rock versus limestone, an alkaline rock. In bottled water, the researchers observed variations that can likely be traced to one being bottled at the source and one being chlorinated for transportation from the source to the bottling plant. 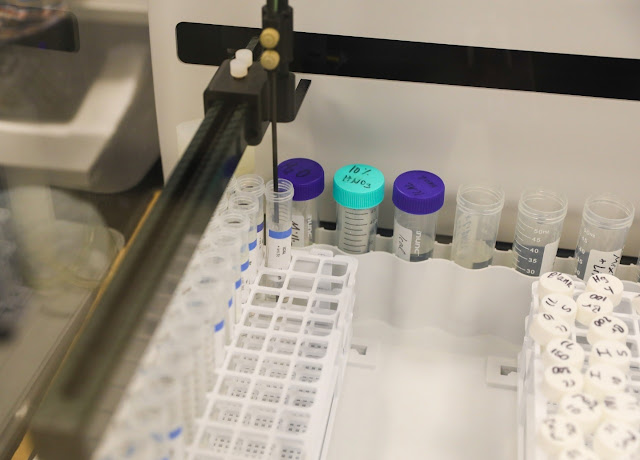 
Future studies will measure and report on larger samples of water, wine, milk, and other fluids; a study of more than 1,000 wines from 34 countries is in progress. In addition, once elemental patterns for specific environments have been established, the method can be applied to answer questions in fields that relate the present to the past, such as the paleoenvironment and climate change.

“Water is an arbiter of how a system actually works. If you sample the water from a pond or river and measure the elements, you are measuring the stuff that becomes incorporated into all life—water feeds the plants, animals eat the plants, we eat the plants and animals. We could use this knowledge to study human fossils and potentially retrodict what the nature of the region’s water was hundreds of thousands or millions of years ago,” said Bromage.

In addition to Bromage, study authors include Melanie Bäuchle, Sasan Rabieh, and Khemet Calnek of NYU College of Dentistry and Tina Lüdecke of Senckenberg Biodiversity and Climate Research Center and NYU College of Dentistry. Research support was provided by the Max Planck Prize, endowed by the German Federal Ministry of Education and Research to the Max Planck Society and the Alexander von Humboldt Foundation, as well as Human Microassay, Inc.

Founded in 1865, New York University College of Dentistry (NYU Dentistry) is the third oldest and the largest dental school in the US, educating nearly 10 percent of all dentists. NYU Dentistry has a significant global reach with a highly diverse student body. Visit http://dental.nyu.edu for more.